When I first started working at the law firm, more than 30 years ago, the lot at the western corner of Gay and High Streets in downtown Columbus was occupied by some kind of five and dime store.  It may have been a Woolworth’s, it may have been a Kresge’s, but there was a building and business there where I bought some small item, once.

I only went there once, because very soon after I made my purchase the building was torn down and the lot was paved over for parking.  It was one of the last gasps of the Columbus urban craze for demolishing old buildings that left the core area of downtown a veritable wasteland of ugly surface parking lots.  The preponderance of parking lots gave the center of downtown a kind of sad, scarred feel that made you wonder whether the area would ever be revived. 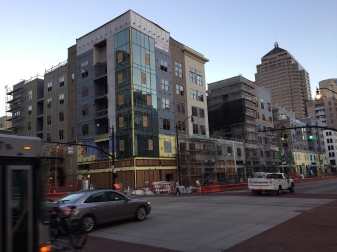 But slowly, over the past decade, many the surface lots are being replaced with buildings.  Some of the buildings are pure residential developments, many are mixed-use concepts with retail on the ground floor, office space above, and residential at the top, and a few purely commercial buildings have been constructed, too.  And some of the commercial buildings with parking lots have been converted into something that is much more interesting — like the former tire and lube business a few blocks from the firm that was turned into a cool bar, with its former parking lots becoming fenced-in outdoor seating areas complete with fire pits and games and food truck space.

And now the big, long-empty lot at the corner of Gay and High has finally joined this welcome trend.  Work has been ongoing for a while now, and as the picture with this post indicates, it’s getting close to being done.  It’s a huge project that is one of those mixed-use developments, and the buildings look pretty cool — and are much preferable to the grim asphalt expanse that we’d been looking at for years.  We’re now wondering what business might move into the ground floor options, and are hoping they will add to the buzz on Gay Street — for some years now the coolest street in downtown Columbus largely because the original buildings on the block between High Street and Third Street somehow survived the wrecking ball.

After more than three decades, our little part of the world is being reconfigured.  Scratch another surface parking lot and substitute something more attractive and vibrant and hopefully a harbinger of more to come.  Our downtown is on the move, one parking lot at a time, and we couldn’t be happier about it.

For years now, the skyline of downtown Columbus has stayed pretty much the same.  For decades, it’s been the Nationwide complex of buildings to the north, the courthouse and municipal buildings to the south, and the cluster of high-rises surrounding Capitol Square and the LeVeque Tower in the middle. 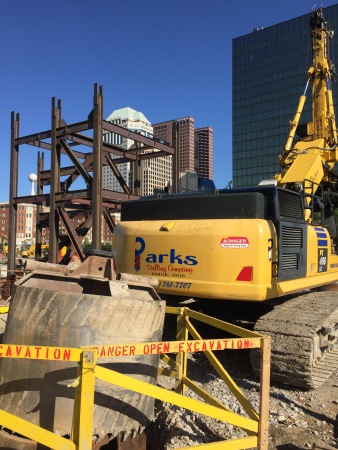 All of that is now changing, and rapidly.  As I mentioned recently, there are construction cranes all over the downtown area.  Every day I walk past a construction site at the corner of Rich and Third Street that is taking the place of what used to be a grassy expanse adjacent to Columbus Commons that was home to kickball games and exercise groups.  Soon it is going to be the location of a 12-story mixed use building with retail on the ground floor, a few stories of office space, and residential units.  There are similar multi-story, “mixed use” buildings under construction up and down High Street, filling in most of the surface parking lots that have been an eyesore on Columbus’ main north-south street and helping to bridge the “skyline gap” between the taller buildings in downtown Columbus.  And the city is abuzz about the recent announcement of a 35-story skyscraper to be built next to the North Market — an addition that will really change the look of the skyline.

But, to my mind, the North Market high-rise announcement, and the other construction projects aren’t the biggest sign of how things are changing in downtown Columbus.  Instead, the most compelling indicator is the money that has been poured into refurbishing the crumbling, crappy Long Street garage, where I used to park my car until the structure was condemned by the city.  Amazingly, a new owner purchased the building and has been working on it for months, giving it a spiffy blue metal and glass facelift and adding a car wash option for parkers.  You know your downtown area is heading in the right direction when developers are willing to put money into a derelict parking garage in the expectation that the conversion of surface lots into buildings, and the influx of workers and new downtown residents, will make a better parking garage a profitable enterprise.

What’s going on in downtown Columbus is pretty amazing, and we’re going to be seeing the results of the changes every day as we drive, and walk, and bike, into work.

I’ve worked in Columbus for 30 years, but I’ve never had a chance to vote for the Mayor of Columbus — until now.

Columbus is one of those communities where the central city is ringed by suburbs.  Our houses have been in the ‘burbs, rather than the city of Columbus itself, and when it comes to local government in central Ohio you vote where you sleep.  As a result, although for three decades I’ve spent most of my waking workday hours toiling away in downtown Columbus, paid Columbus income taxes, and enjoyed city activities and contributed to city coffers in countless ways, I’ve never cast a ballot for the Mayor and City Council members whose decisions have directly affected my daily activities.  Our move to German Village, which is in the city of Columbus, changed all that.

As I’ve noted before, Columbus is a reflexively non-partisan place, so it’s not surprising Columbus would have a non-partisan approach to electing a mayor.  The four candidates, from both political parties, have had four debates and will face off in a non-partisan primary on May 5, and the two top vote-getters will advance to the general election.  The candidates include current City Council president Andrew Ginther, who is seen as the favorite, Franklin County Sheriff Zach Scott, Terry Boyd, former President of the Columbus School Board and the only Republican in the race, and James Ragland, the development director at the Cristo Rey high school.

As a voter and now a Columbus resident, what do I care about?  Mostly, it’s continuing the culture and trajectory set by current Mayor Michael Coleman and his predecessors.  I want the city to stay a low-key, friendly, collaborative place that welcomes everyone regardless of race, creed, or sexual orientation.  I want more downtown development, and I’d like to see the wave spread to other neighborhoods, like Franklinton and the near east side.  I support tax policies, increasing school quality, and approaches to policing and physical security designed to reverse suburban sprawl and encourage businesses and people to locate in the city and its neighborhoods.  And I want to maintain the focus on spurring the things that are causing Columbus to be recognized nationally as a cool place to live — things like more and improved parks, community events and cultural activities, lots of good restaurants and places to spend an evening, and interesting and affordable neighborhoods where people are rehabbing and restoring old buildings rather than tearing them down.  Whether the mayoral candidates support legalized marijuana, which was a topic at one of the recent debates, is very far down my list of issues of importance.

In the period between now and the May 5 election I’ll be studying the candidates and their positions on issues of importance to me.  I’m excited about my first opportunity to vote for the mayor of Columbus, and I want my decision to be an educated one.

Richard continues to hit it out of the park in his internship for the Chicago Tribune this summer.  His most recent story is a really great piece about how the recession hit the South Side of Chicago especially hard and that, years later, the development efforts in South Side neighborhoods still have not recovered.  The piece includes a well-done and easy to use interactive map that allows you to look at the impact of the recession on a neighborhood-by-neighborhood basis.

This kind of story is really good reporting for two reasons.  First, it addresses a topic — the status of rich neighborhoods versus poor neighborhoods in America, with the impact of crime and teetering city finances thrown in for good measure — that is not frequently addressed in the media. It’s not a pleasant, or easy, story to report, but it’s essential to cover if we are to get a true sense of economic reality.

Second, it involves real shoe-leather reporting, which often involves digging into public records like construction permits and figuring out boring topics like tax increment financing districts.  It’s easy to call the head of a development agency, get his or her spin in a pre-packaged quote, and stop there; it’s much more challenging and time-consuming to sift through documents obtained from a municipal office and do the kinds of painstaking, but powerful and irrefutable, comparisons that Richard has done in this piece.  People might pitch things to advance their agendas, but the construction permits don’t lie, because without the permits nothing gets built.

Forgive me for a little proud bragging — although what’s a family blog for if not for a little parental boasting? — but I greatly admire Richard’s willingness to roll up his sleeves and tackle some of the tough and challenging issues found in the urban areas of America.  He has become a really fine reporter.

When some heavy earth-moving equipment suddenly appears on a vacant field in New Albany, you can be pretty sure that a residential housing development is not far behind. I saw this leading economic indicator on a spot of ground between our North of Woods neighborhood and Market Street.