A court recently ordered the Disney Company to pay $8,000 to a patron after he was stranded on a ride at Disneyland. 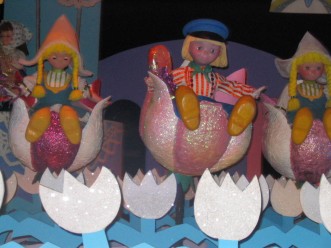 The man uses a wheelchair, and the ride in question was “It’s a Small World.”  The man, who suffers from panic attacks and high blood pressure, was stuck for a half hour after the ride broke down and non-disabled patrons got up and left.  The story linked above notes — and this is, I think, the most crucial fact of all — that the “It’s a Small World” theme song played throughout the time the man was stranded.  Oh, and did I mention that the man also had a full bladder?

If you’ve visited Disneyland and been on the “It’s a Small World” ride, you know that the ride’s theme song is one of the most insipid, saccharine songs ever written and recorded.  It’s a small world after all . . . .  Once you’ve heard it, it burrows deep into the recesses of your brain and is never successfully forgotten no matter how hard you try.  It’s a small world after all . . . .  Even worse, it is sung by high-pitched, piping, aggressively chipper child voices on a continuous loop as the ride progresses.  It’s a small, small world!  After having to listen to the music for the few minutes of the ride, any reasonably sane adult is ready to run screaming from the building.

Part of the $8,000 award was for “pain and suffering.”  I’ll say!  To be left, alone, in the ride, among the mindlessly smiling, doll-faced depictions of children from around the world, desperately needing to answer the call of nature while enduring the cloying onslaught of the banal song playing over and over and over again, sounds like a particularly awful form of personal hell. 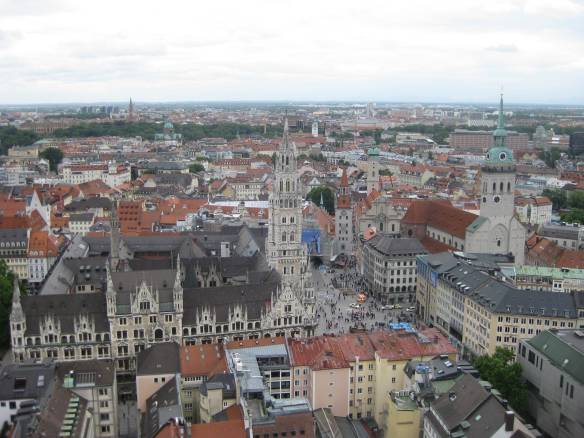 Munich, from the spire of the Frauenkirche cathedral.

I’ve come up with a rule for hostels: if the hostel serves beer in the lobby, I probably won’t like it. Unfortunately, the hostels I stayed at in Hamburg and Munich – the Meininger Hamburg City Center and the Easy Palace City Hostel, respectively – both served beer right at the check-in desk. Overpriced 3-Euro beers.

I don’t have anything against beer, but I’ve found that the hostels that serve it (the ones that can afford the liquor license, probably) tend to be large, corporate-style hostels. They tend to be the type of hostel that charges 2.50 Euros an hour to use the internet, that has an understaffed reception desk, that doesn’t give out free maps, that doesn’t offer free breakfast. They are full of large groups of American college students and French and Italian high-schoolers, making it difficult for individual backpackers to meet each other.

A lot of my food was stolen at my hostel in Hamburg. The thief even opened a fresh can of pasta sauce and used three quarters of it, which particularly incensed me. There’s always a risk that someone will steal your food, but when you’re staying at large hostel, the risk that some jerk will pass through the kitchen and filch your food is, obviously, larger.

What angered me most about my hostel in Munich was the poor quality of the kitchen. There were only two plates and no bowls, forcing me to eat my cornflakes out of a pot. There was no table, so you had to carry your food two stories down to the bar to eat it. This made it especially hard to meet fellow lone backpackers, who can often be found eating their meals in the kitchen. I was also annoyed by the lack of a can-opener, which I needed to make my usual lunch of a tuna-salad sandwich. The first and second day, I walked to the Italian restaurant next door and asked an employee to open it for me. The first day, he did so cheerfully, but the second day he angrily asked if I would be doing this every day, so from then on I opened the cans with a knife.

Unbelievably, this hostel which had no can-opener, no table, no bowls and almost no plates in the kitchen, had a posh bar area in the lobby with rainbow disco lights running all day.

I managed to meet people at both hostels despite their anti-social ambiences. On my first night in Hamburg, I went to a bar on the Reeperbahn in the red-light district with a guy from Toronto, a girl from Montreal, and a girl from Brazil. Hamburg’s red-light district isn’t nearly as seedy as Amsterdam’s; there aren’t prostitutes tapping on windows everywhere you walk. It was in this area that the Beatles started their career playing at grungy clubs, and there’s a small monument to them on the sidewalk. 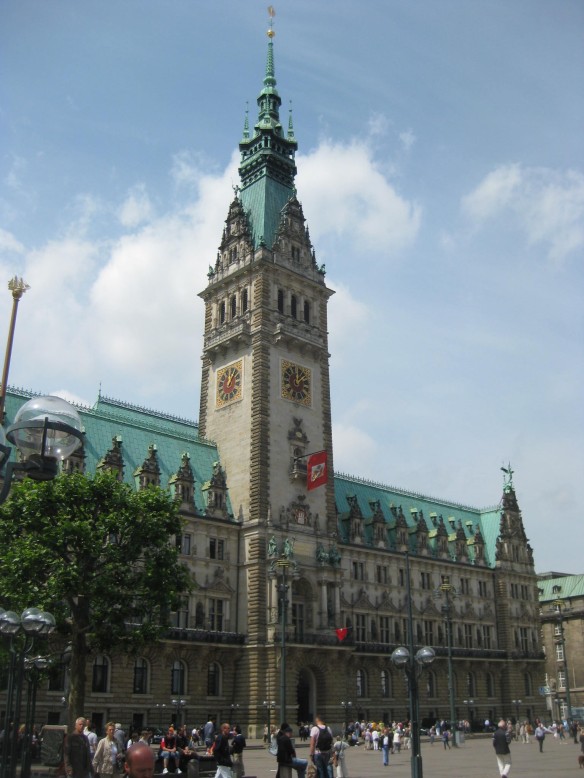 The next day I walked around the city with the Brazilian girl, Natalya. We saw Hamburg’s beautiful Rathaus (a.k.a. courthouse), and the St. Nikolai church, which was almost destroyed in World War II and has been left in its ruined state as a memorial against war. We strolled through Hamburg’s high-end shopping district, where we stopped at the Lego store and marvelled at how expensive and cross-marketed (with Star Wars, Harry Potter, etc.) Lego has become. Still, there were some sets in there I would have loved to have as a kid. On our way back to the hostel we walked by Hamburg’s magnificent port, a beautiful, colorful industrial vista. 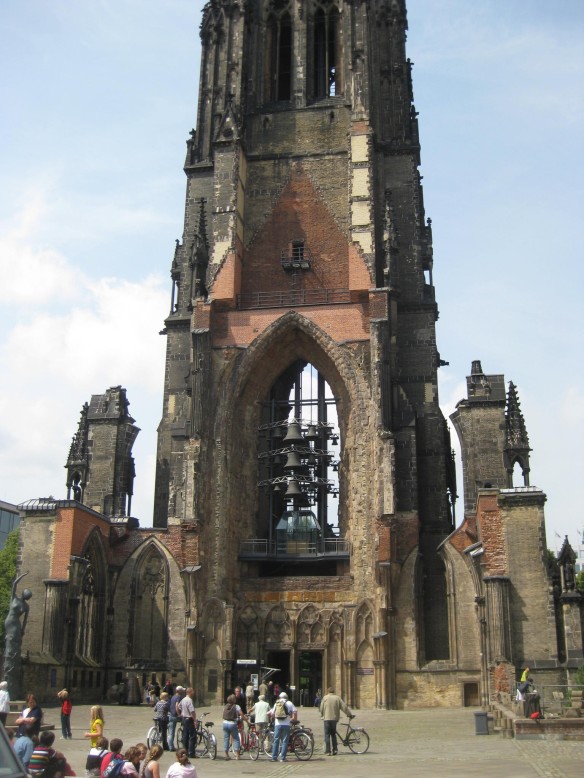 The ruins of the St. Nikolai church. 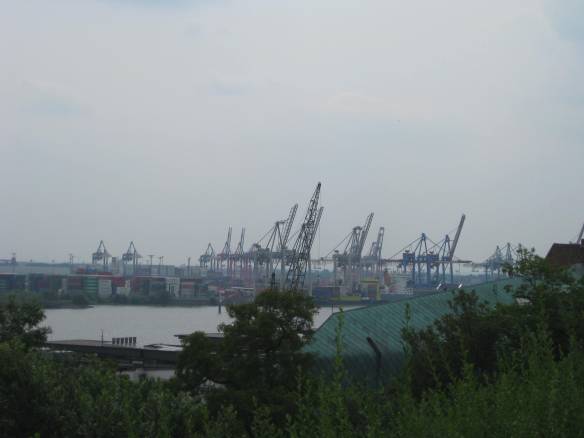 On my last day in Hamburg I took a day-trip to Lübeck, a small medieval town that is a UNESCO World Heritage site. Some of the buildings were beautiful, such as the entrance gate and the cathedral (which, unlike St. Nicolai, was repaired after World War II), but I didn’t like Lübeck much. There was too much construction, too many tourists and too much traffic. It wasn’t the quiet town I was expecting.

The next day I took a five-hour train to Munich. Munich seems to have suffered less damage in the war than Berlin and Hamburg, leaving more interesting architecture around. I spent a lot of my time walking around and taking pictures of the buildings I liked. 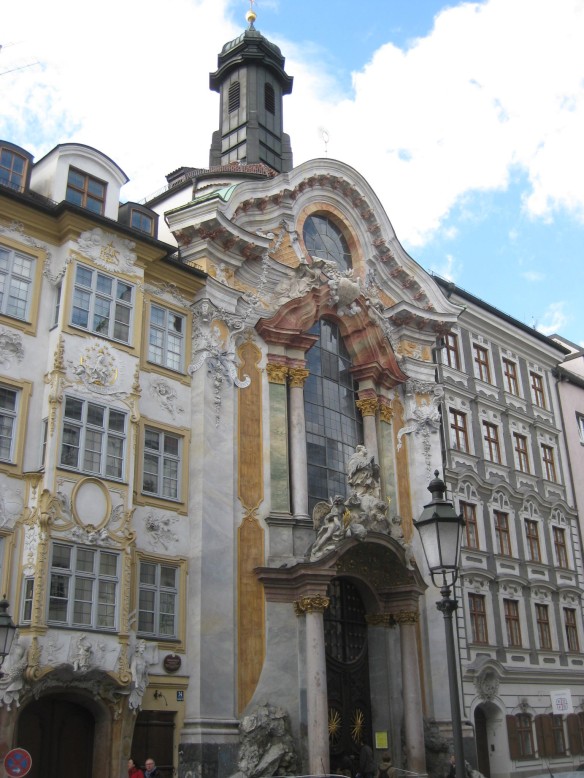 A church in Munich.

I also spent a lot of time in Munich’s beer gardens. On my second day in the city, I walked through the rain to the Hirschgarten park, where I ordered a large Augustiner beer. It was much bigger than I expected – I put the salt and pepper shakers next to the mug when I took a picture to give a sense of its size. I ordered some meatballs and potato salad to soak up some of the beer. 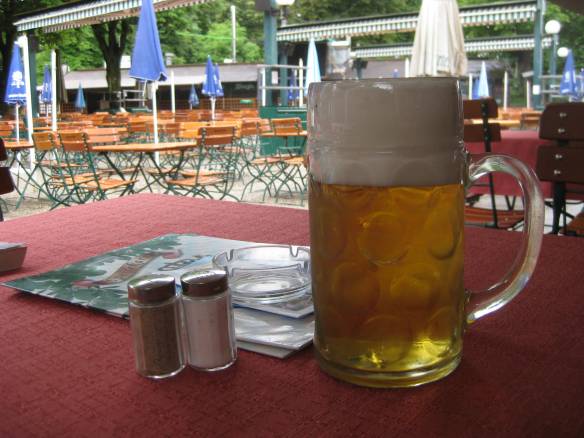 The Augustiner beer at Hirschgarten.

On the next day, a Sunday, there was a big Bavarian festival next to the Rathaus in the city center. I never found out for sure, but I think the festival is held every Sunday. When I first arrived there was a band playing traditional Bavarian music, with couples dancing in front of the stage in traditional Bavarian garb. Later, a younger band played music that seemed to be a Bavarian-rock hybrid. I ordered a Hofbrau beer and some sort of wurst in a bun. For desert, I bought a fist-sized wad of marshmallow and bread covered with chocolate. 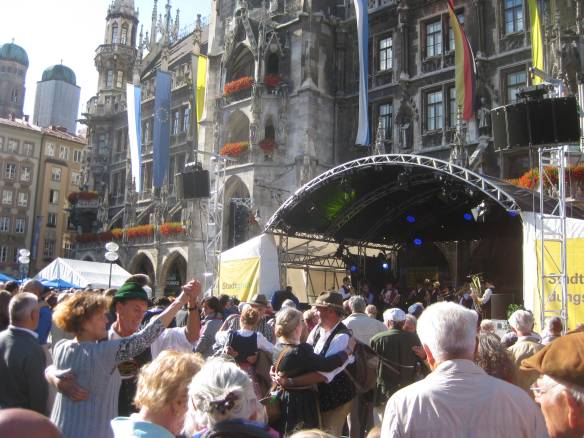 The festival in front of Munich's Rathaus.

I spent my last day in Germany at the Neuschwanstein castle in Füssen. The castle was built by King Ludwig II of Bavaria in the late 19th century as a fantastical version of a medieval castle. Later, it served as the inspiration for the castle at Disneyland. It is, predictably, a very popular place for tourists, many of whom were having a lot of trouble hiking up to it. 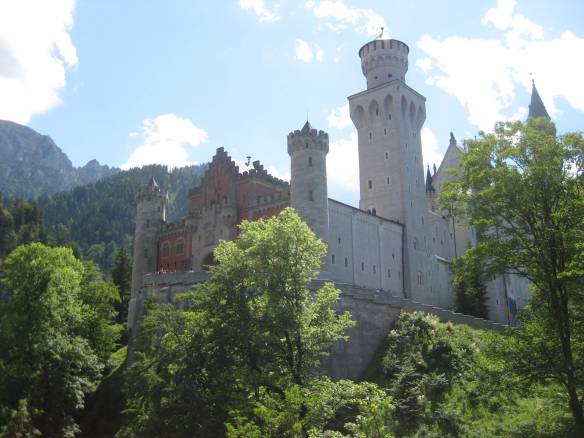 Although Neuschwanstein was magnificent, I enjoyed my trip to Füssen more because it gave me one last day in the Alps. As soon as the train entered the mountains, I remembered why I loved the Alps so much when I was in Switzerland. The air smelled fresh and woodsy, and the sky and water were special shades of blue. After experiencing the castle, I hiked to the nearby Alpsee lake and spent some time sitting on a bench, enjoying the view, before I returned to the train station to go back to Munich. 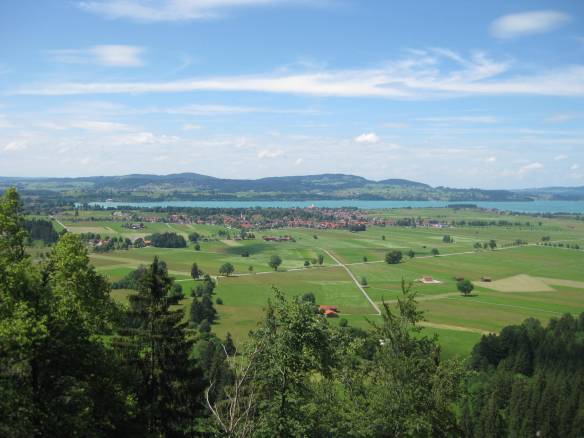 A view from Neuschwanstein. 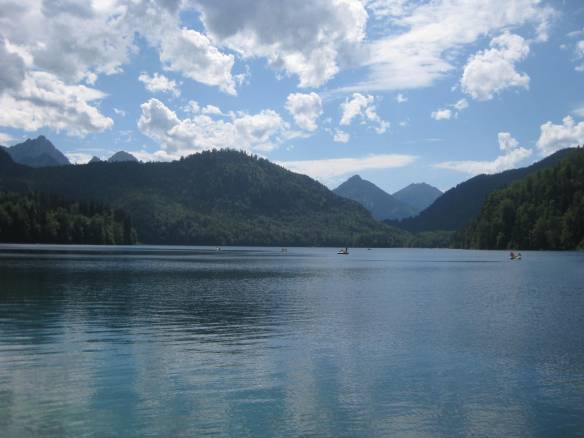 I woke up at 5 AM the next morning to get on a bus to Vienna, wondering groggily whether I booked the early ride out of necessity or because I wasn’t thinking. I spent more than two weeks in Germany, but there were so many cities I didn’t get a chance to see – Dresden, Stuttgart, Frankfurt, etc. Hopefully, I will get a chance to return someday.