Everyone knows that doughnuts are an irresistible food for human beings. Now there is evidence that the appeal of those ever-tempting, soft, sinfully sugary pastries isn’t limited to homo sapiens.

In LaBelle, Florida, a man and his horse have become regulars at the local Dunkin’ Donuts drive-thru line. Once a week, David Bosselait and his mount, Jackson, make a 12-mile round trip from their home to the doughnut emporium so Bosselait can get his cup of coffee and Jackson can enjoy his standard order: a plain doughnut hole. Jackson also gets a lot of love and attention from the Dunkin’ Donuts employees when he visits.

Bosselait says the weekly visits to the doughnut shop have had a positive impact on the horse, who is getting used to being around cars and staying “focused.” I’m not sure that introducing anyone–or any horse–to the wonders of doughnuts can really be described as a positive thing, because once you’ve enjoyed a doughnut you can never go back. Jackson may be getting better in traffic because his real “focus” is on getting that scrumptious doughnut hole every week.

Jelly is the Titanic of doughnut fillings. Whipped cream and custard are great, but jelly makes the filled doughnut risk-reward analysis truly daunting. No one likes it or wants it, but usually there is at least one jelly doughnut in every assortment, lurking and ready to hurl the unlucky into the pits of despair and, in most instances, a jelly-squirted stain on their shirt or blouse. Rational people therefore will do whatever they can to avoid one, but in a communal box it’s tough. Picking up a doughnut for careful examination of telltale jelly signs isn’t really encouraged at the tail end of a pandemic.

This morning, another wary lawyer and I decided to address the jelly analysis issues by securing a knife and making a dainty cut just sufficient to allow accurate identification of the filling—which fortunately was whipped cream. Armed with that knowledge and satisfied that we were not courting disaster, we made our selections.

Our kitchen later confirmed that they had specifically avoided ordering any jelly doughnuts. It’s just another reason why our kitchen staff is great. 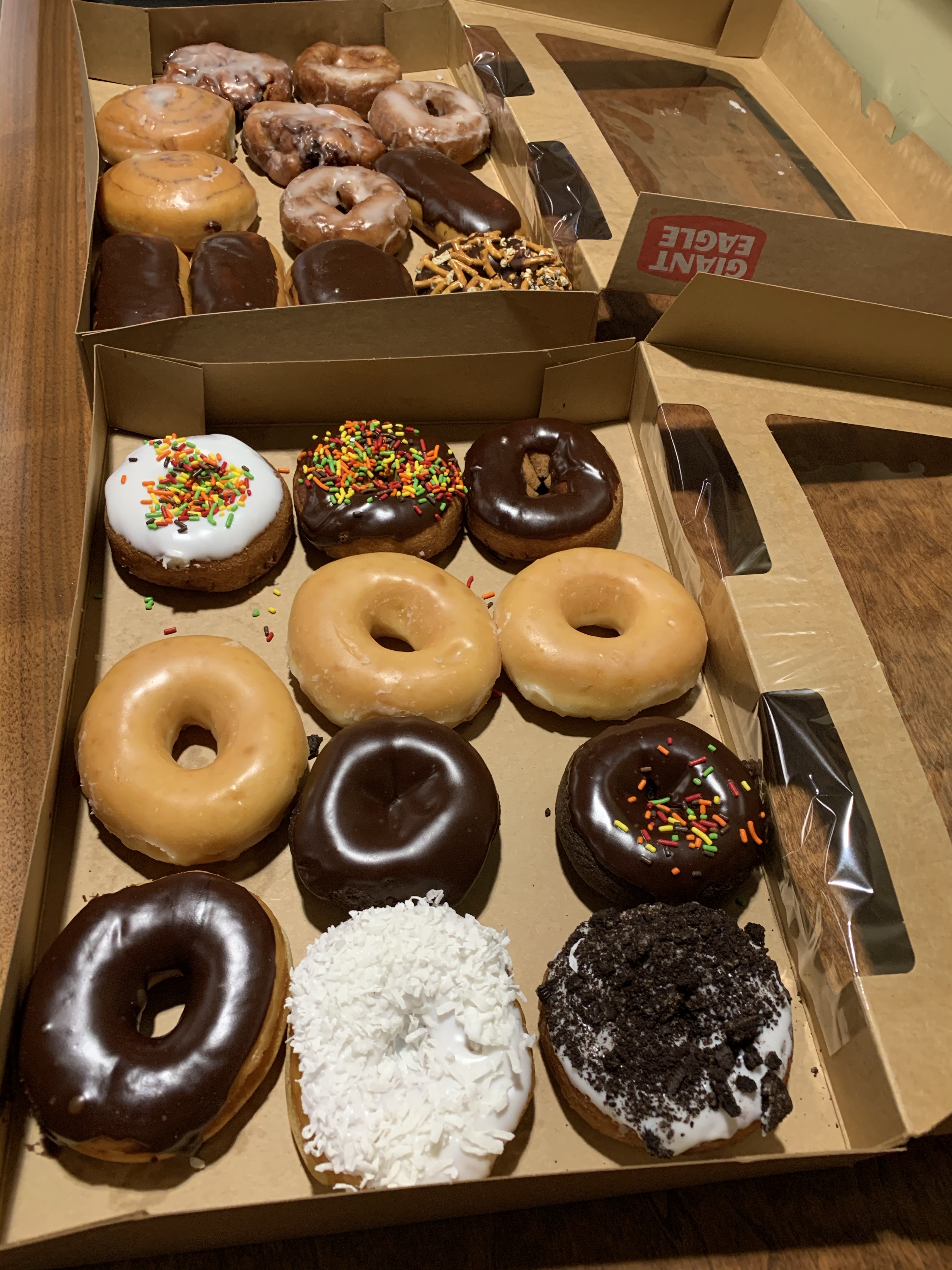 I’m getting ready for a morning presentation and asked that an assortment of doughnuts be provided. Doughnuts both help to assure decent attendance — who doesn’t want a doughnut in the morning? — but also an engaged and alert audience that is dealing with the initial doughnut sugar rush.

It’s important to get to the conference room early, to open the doughnut boxes and let that unique doughnut fragrance fill the room. Once a doughnut is sensed, it’s impossible to resist.

There’s a good assortment here, including my favorite — a cake doughnut with dark chocolate icing. Also a few new doughnut options, like one with crumbled Oreos and another with pretzel sticks.

How serendipitous!  Right after writing about fair food and America’s love of doughnuts, I see a news item that combines the two.

This year’s New York State Fair will be serving up the Big Kahuna Donut Burger.  This quarter-pound burger is served between slices of a grilled glazed doughnut.   With cheese, bacon, and the fixin’s, The Big Kahuna Donut Burger comes out to about 1,500 calories:  a true, over-the-top gutbuster.  What will they think of next?  Couldn’t they have worked a deep-fried Snickers bar into the mix somehow?

I’d like to see someone slug down a Big Kahuna Donut Burger and then take a spin on the Tilt-a-Whirl — at least, I’d like to see it from a safe distance.

Yesterday, America showed its love for doughnuts and put its money where its mouths want to be.

On a bleak day when the Dow Jones average plunged nearly 200 points on fears that the debt ceiling quandary will not be solved, Dunkin’ Brands Group — the parent company of Dunkin’ Donuts — was a lonely bright spot.  Yesterday, Dunkin’ Brands had its initial public offering.  It started the day’s trading at $19 per share and ended at $27.85 — up a robust 46.6 percent.  Dunkin’ Brands has ambitious growth plans that seek to feed on America’s insatiable appetite for fried rings of dough and expand into new markets on the west coast and in Asia and South America.

Americans — and not just policemen, either — eat billions of doughnuts each year, although our per capita consumption apparently lags behind that of our Canadian neighbors to the north.  We are addicted to consumption of those heavenly circles of doughy bliss, coated in glaze or honey or chocolate icing, filled with fruit jelly or whipped cream or custard, and topped with colorful sprinkles or coconut shavings or chopped nuts.

As for me, I can’t resist a basic glazed doughnut or a simple cake doughnut with dark chocolate icing.  I therefore try to give all doughnut stores a wide berth, lest my waistline mirror Dunkin’ Brands rapid expansion.