There used to be a saying in college football:  September is for pretenders, and November is for contenders.  The underlying concept was that the good teams played a bunch of patsies in September and the tough games really didn’t roll around until November.  Thus, November was when you’d finally separate the wheat from the chaff.

That saying is true no longer, at least for the Ohio State Buckeyes. 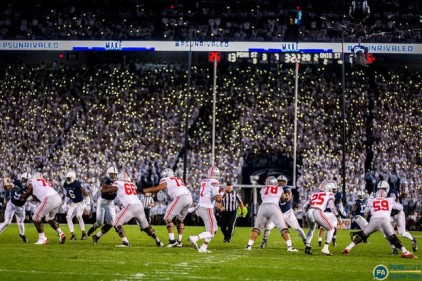 Last night — on September 29 — the Buckeyes had to play the Penn State Nittany Lions at Happy Valley.  Penn State is one of the toughest teams in the Big Ten and a perennial contender for the conference championship, both teams were ranked in the top ten, and 110,000 screaming, white-clad fans packed Beaver Stadium to cheer on the Lions.  The sound in that Stadium last night was deafening.  It’s hard to imagine a better atmosphere for a big-time college football game, or a more daunting challenge for the visiting team.  It was a November contest being played in September.

Somehow, the Buckeyes came from 12 points down in the fourth quarter and beat the Nittany Lions, giving Ohio State a leg up over Penn State in the always tough Big Ten East.  The offense sputtered and coughed and the defense gave up some huge plays to let Penn State take the lead, but Ohio State never gave up and kept fighting until the final play.  Kudos should go to everyone on the Buckeye team, with a special nod to the punter Drue Chrisman, who repeatedly pinned the Nittany Lions deep after each unsuccessful Ohio State possession.

These days, college football in September is not for the faint of heart.  The Buckeyes have passed their first huge Big Ten test.  But if this is September, what in the world is November going to be like?