The waterfowl were out in force at Schiller Park today. Even though it was a steamy day, most of the ducks and Canadian geese had forsaken the cool waters of the pond and ventured out onto the grass, looking for food and using their bills to tug away at potential sustenance.

It was interesting to see the ducks and geese out of the water, but you can’t let yourself get too carried away by the sight of our waddling water pals. When geese are about, you’ve really got to watch where you step.

This is the time of year when the ducks in Schiller Park are out and about. Instead of hanging out at the pond, as they typically do, at this time of year they clearly feel a certain wanderlust and could be anywhere–crossing the street, emerging from underneath bushes, or strolling across the lawns.

It can be a bit unnerving as you walk in the pre-dawn darkness. You’ll suddenly detect movement near your feet in the gloom and feel a surge of adrenalin in response to the unknown, and the next thing you know there are a pair of ducks waddling past, murmuring in apparent indignation at your presence. With the DuckShock over, you breathe a sigh of relief and continue on your way.

The roaming ducks always seem to be in female and male pairs, which makes me think the wandering is intended to secure a little privacy, away from the rest of the flock at the pond, for some springtime mating. I always feel a little bad for interrupting the roving of my waterfowl chums–whatever they are doing.

It was raining when I took my walk this morning — so much so that this drake decided to leave the immediate vicinity of the Schiller Park pond and venture out to the driveway of one of the houses along the park.

Here’s a tip for those of you who are taking “coronavirus walks” every day:  rainy days see less people out (but more ducks), so you don’t have to do so much social distancing zigging and zagging.  I would say my walk this morning is easily the most direct walk I’ve taken since the whole social distancing regime took effect.  In fact, I’d guess that all of the veering has added quite a few steps to our standard walks.  Nobody walks as the crow flies anymore.

As for our waterfowl friends, they practice social distancing as a matter of course.  You can’t get too close to a duck without it waddling off to an assured clear distance, shaking its tail feathers and muttering under its breath all the while.  It’s as if they had coronavirus training long ago. 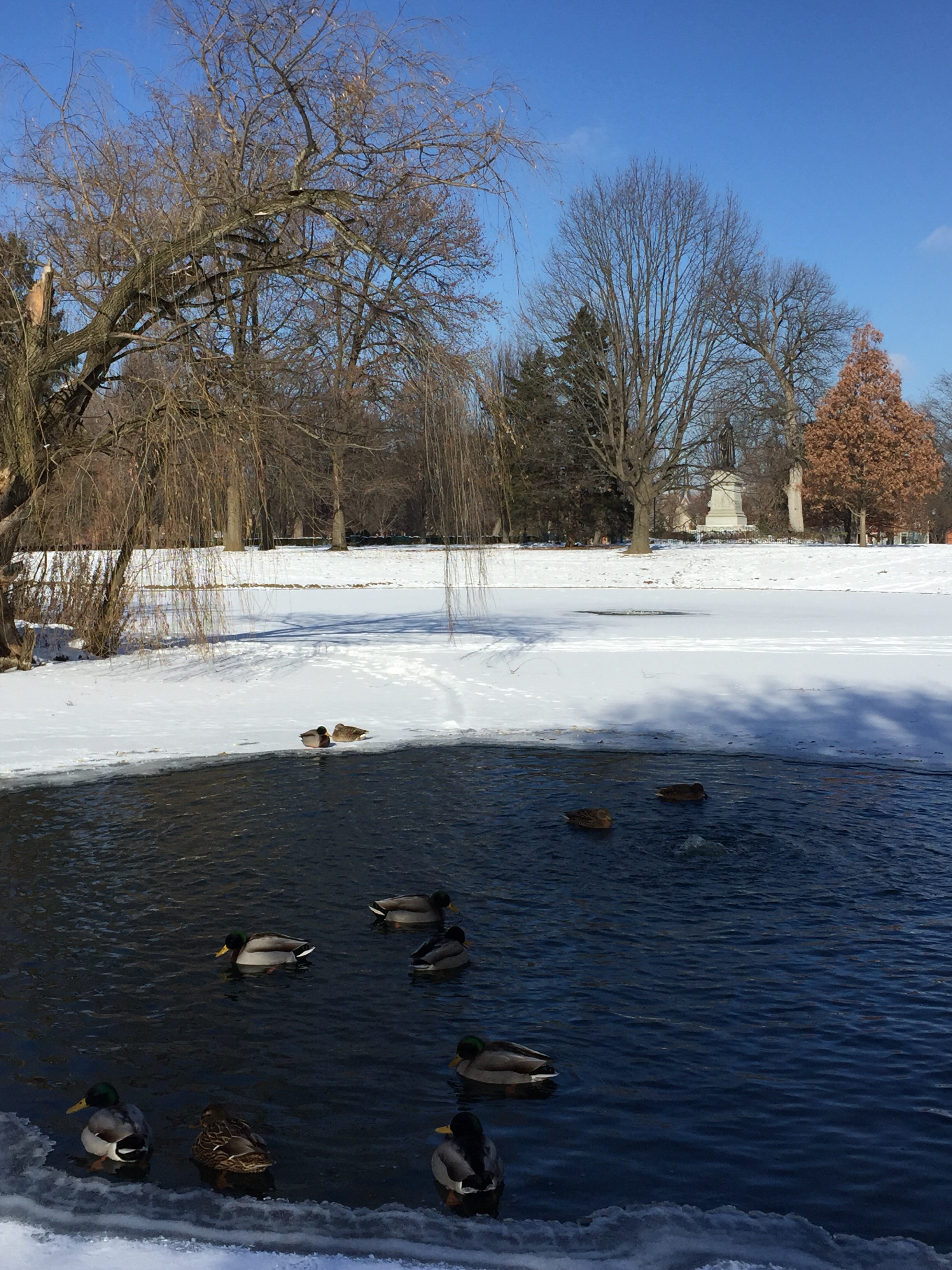 For the hardy ducks living on the Schiller Park pond, there is no escaping the arctic cold — but at least a bubbling device has kept the water in the center of the pond agitated and ice-free.

Why have’t these guys flown south for the winter? 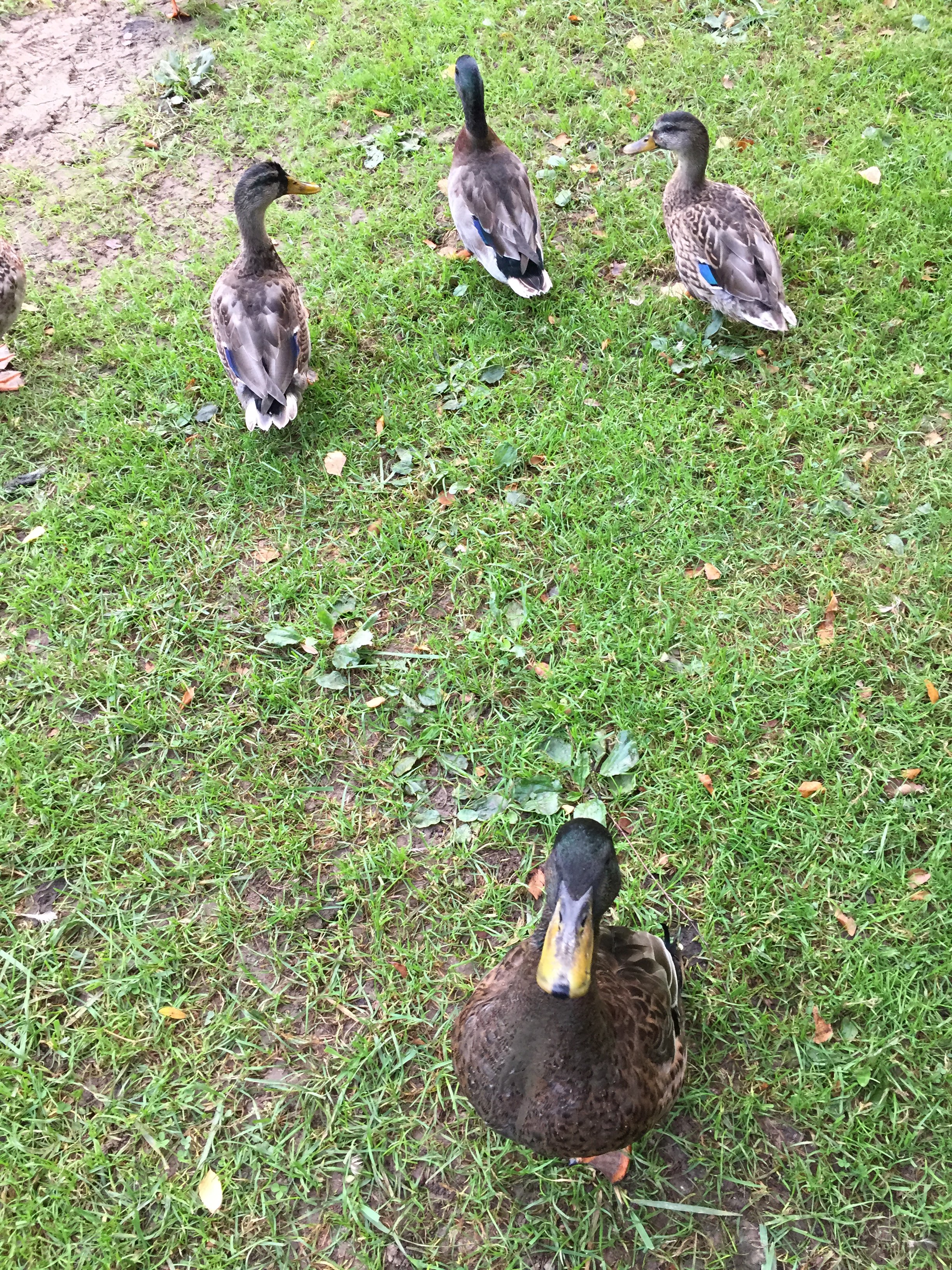 The ducks at Schiller Park are pretty tame.  If you approach them they will waddle right over to stand at your feet, expecting that you are going to toss them some pieces of bread to gobble.

This mallard sat patiently, peering intently to see if I was going to share a morsel.  Sorry, buddy!  Not today! 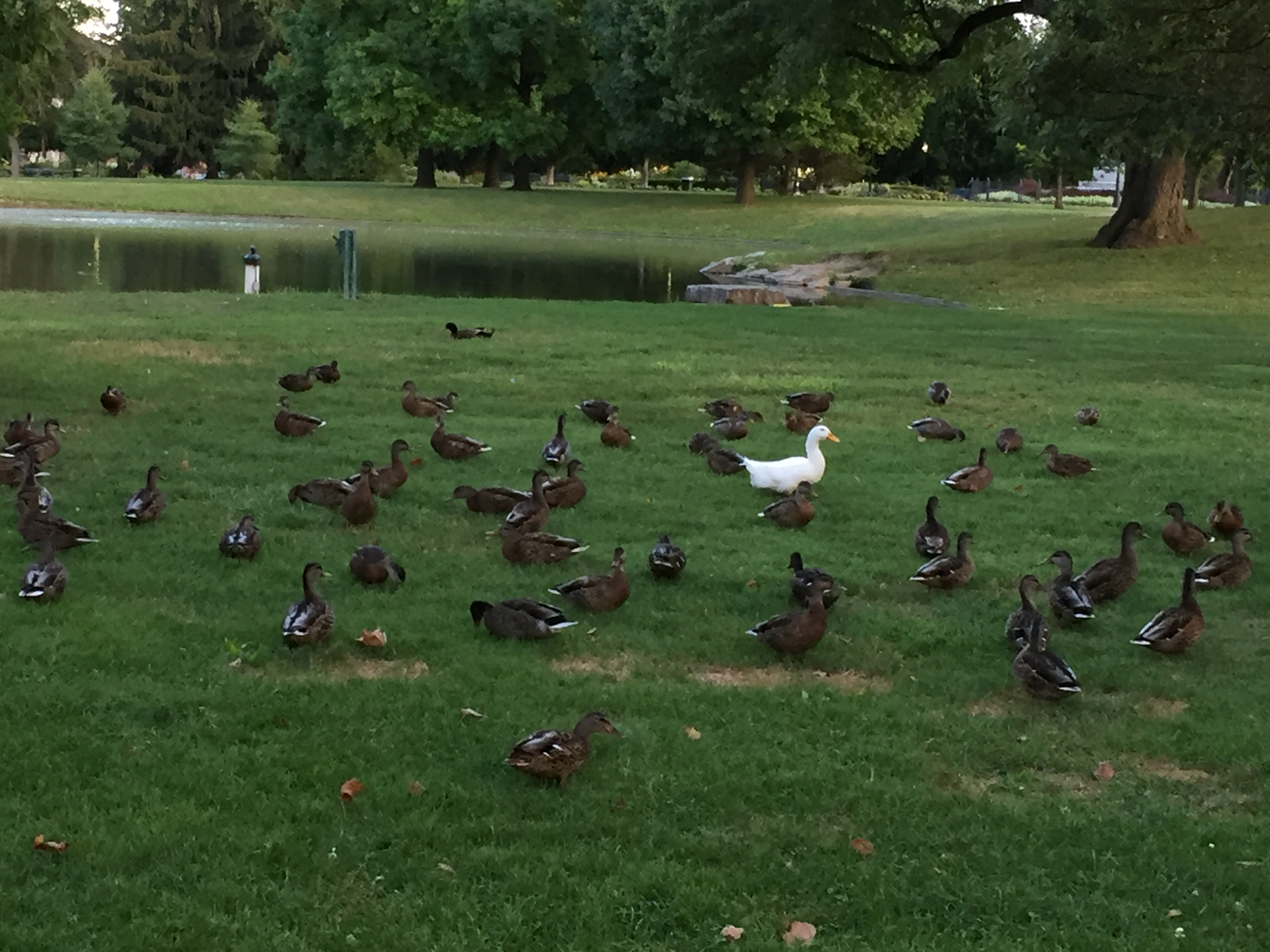 A snow white duck apparently has joined the brace of ducks around the Schiller Park pond — at least, I haven’t seen him before this morning, and given the appearance of his compatriots, you’d think I would have.

I’m arbitrarily naming him Waldo, because he’s hard to find.

I’ve always been an early bird.  I wake up at the crack of dawn as a matter of course.  On most Saturdays and Sundays, I try to roll over and get a bit more sleep.  This morning, though, I saw the early morning sunlight lancing through the slats on our blinds and had the opposite impulse — so I got up and got ready to head out for a walk. 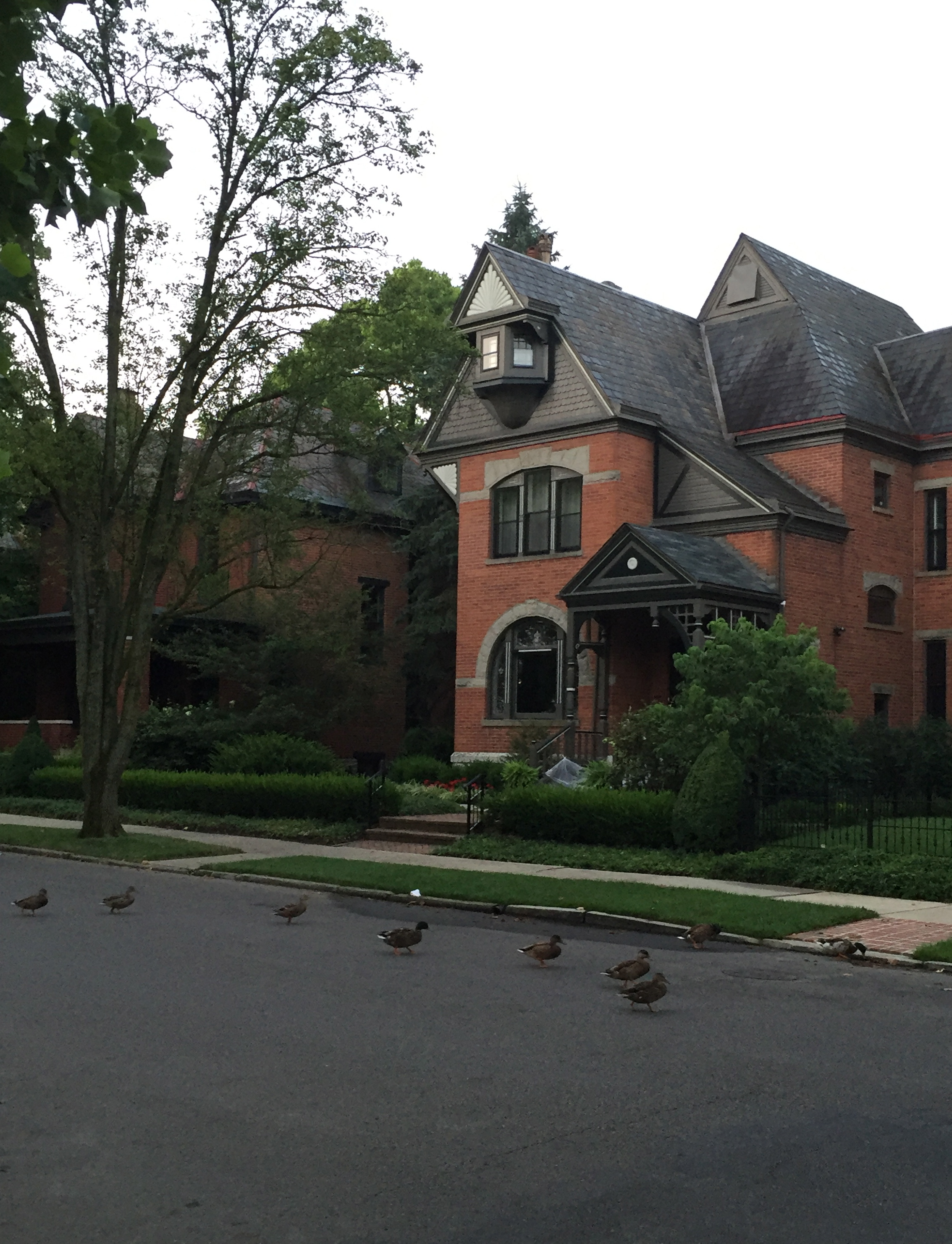 When you’re out for an early morning stroll, there’s no need to primp.  You’re not going to run into anyone at 6 a.m.  A ratty t-shirt and old shorts will do just fine, and don’t worry about totally eliminating that bed head, either.  Drag your fingers through your sorry excuse for a coiff, try to pat down the more egregious hair eruptions, and get going.

One nice thing about the early morning hours:  during the high summer days in the Midwest, when the daytime temperatures can reach the 90s as has been the case recently, they’re one of the few reasonable walking times of the day.  This morning there was still a delightful whiff of lingering nighttime coolness in the air, not yet burned to a crisp by the blazing sun and throttled by the steamy humidity that will be coming soon enough.  Simply breathing was a pleasure, and a few deep gulps of the fresh air tasted wonderful.

As I took my lap around Schiller Park, the robins were out on the lawns, hopping and hunting for worms with their sharp-eyed, birdlike intensity.  The duck pond was swarming with ducks and geese, and some of the adventurous fowl mysteriously decided to march across the street, apparently in search of food.  For the birds among us, it was time to be out and about, even if most of the sleepy human world was still fast asleep.

This morning, it felt good to be one of the early birds. 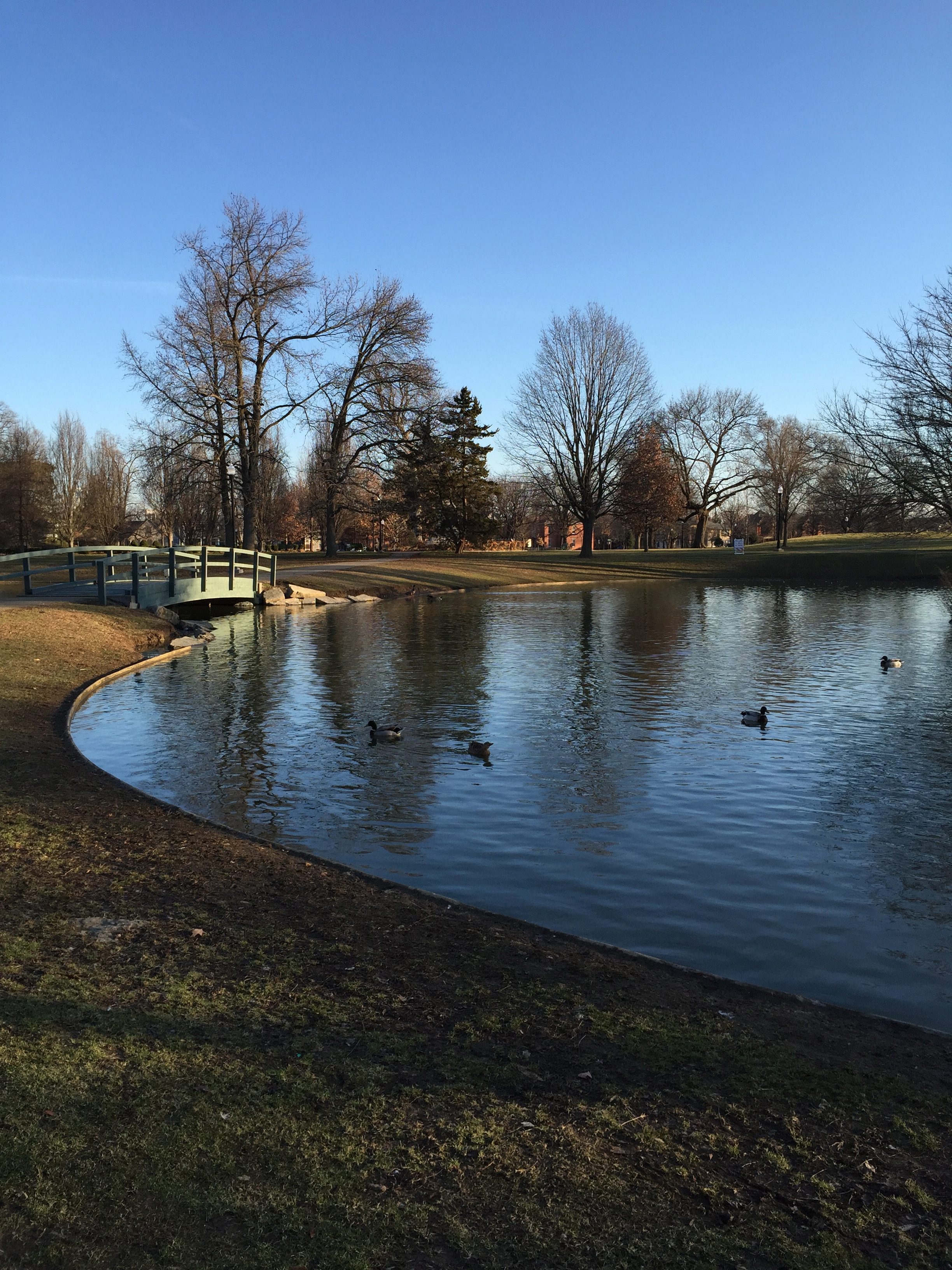 Today Kasey and I got up early and took a very long walk around German Village and neighboring Merion Village.  We passed through Schiller Park just as the sunshine was peeking through the surrounding trees, dappling the landscape, and the ducks were starting to quack and head out onto the water.  There was a slight chill in the air, but the sunshine and bright blue sky were hints of a glorious day to come. 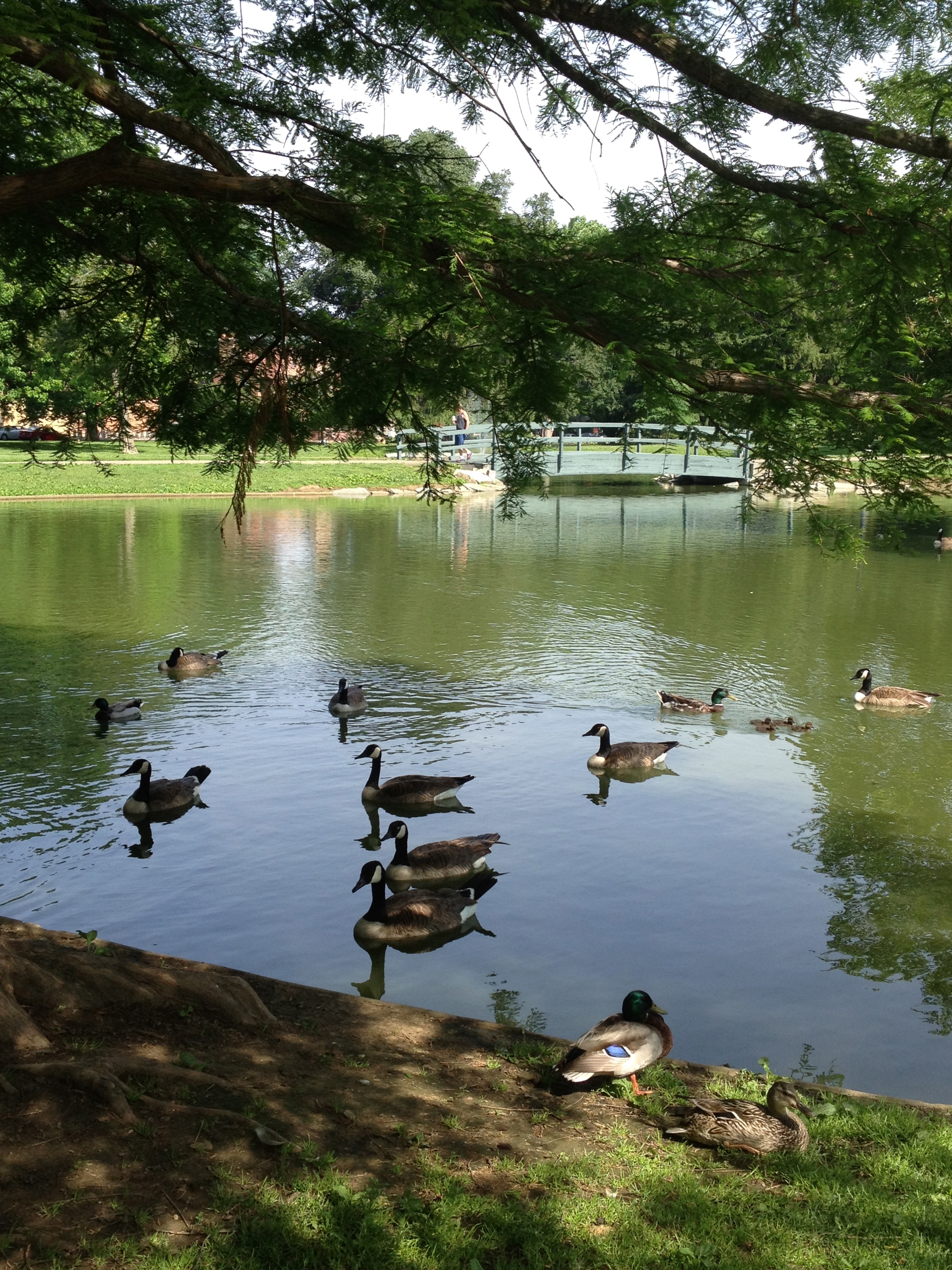 The ducklings and Canadian geese were coexisting peacefully this morning at Schiller Park, on the cusp of a beautiful sunny day, and ducklings were out testing the water under the watchful of their Dad.  The duck pond area is one of my favorite parts of this fine, sprawling, old-line city park. 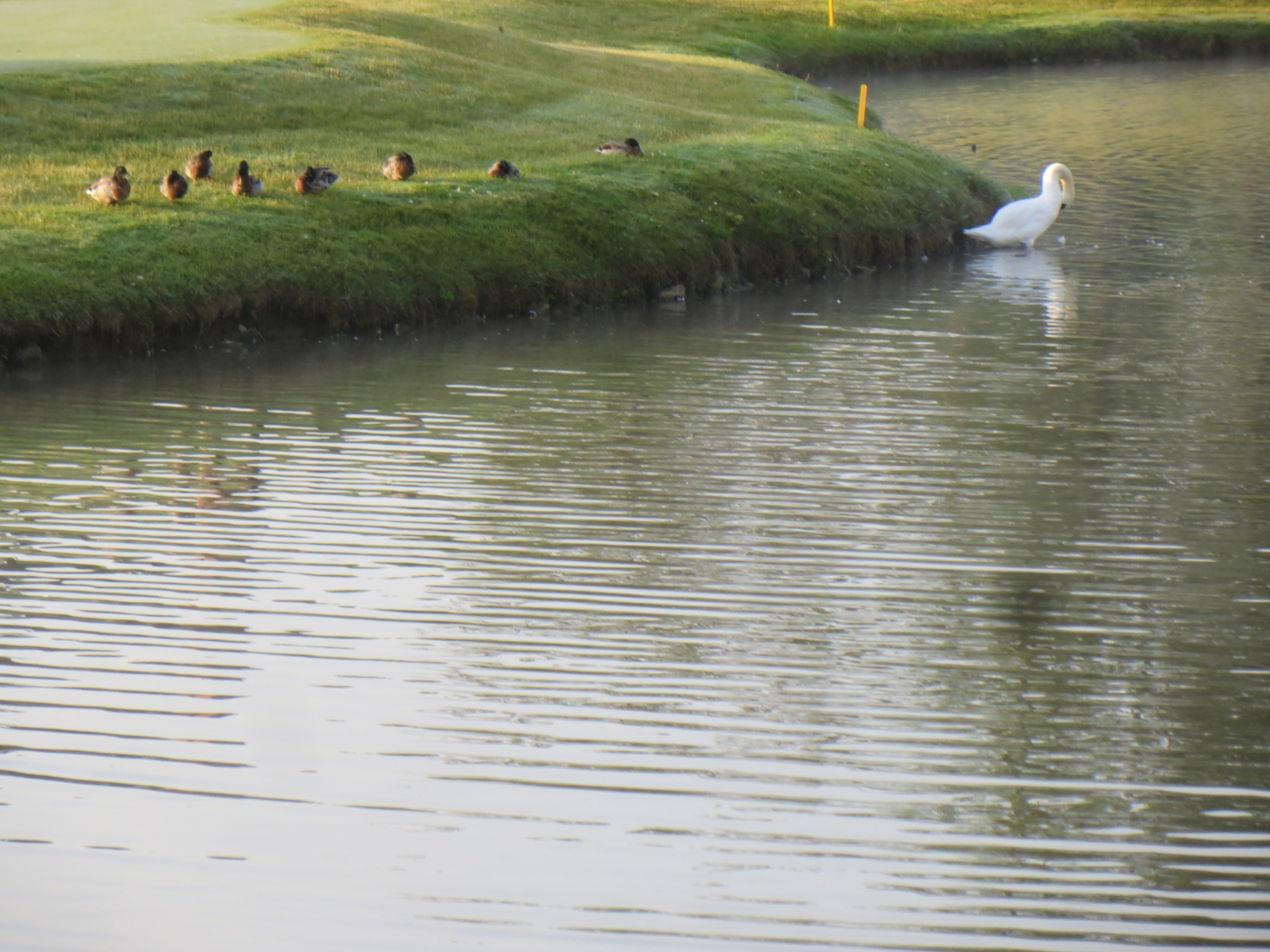 The swan was the early bird when I walked by the pond over the weekend.  The ducks were still snoozing and shaking away the cobwebs while the swan was grooming and getting ready for the day. 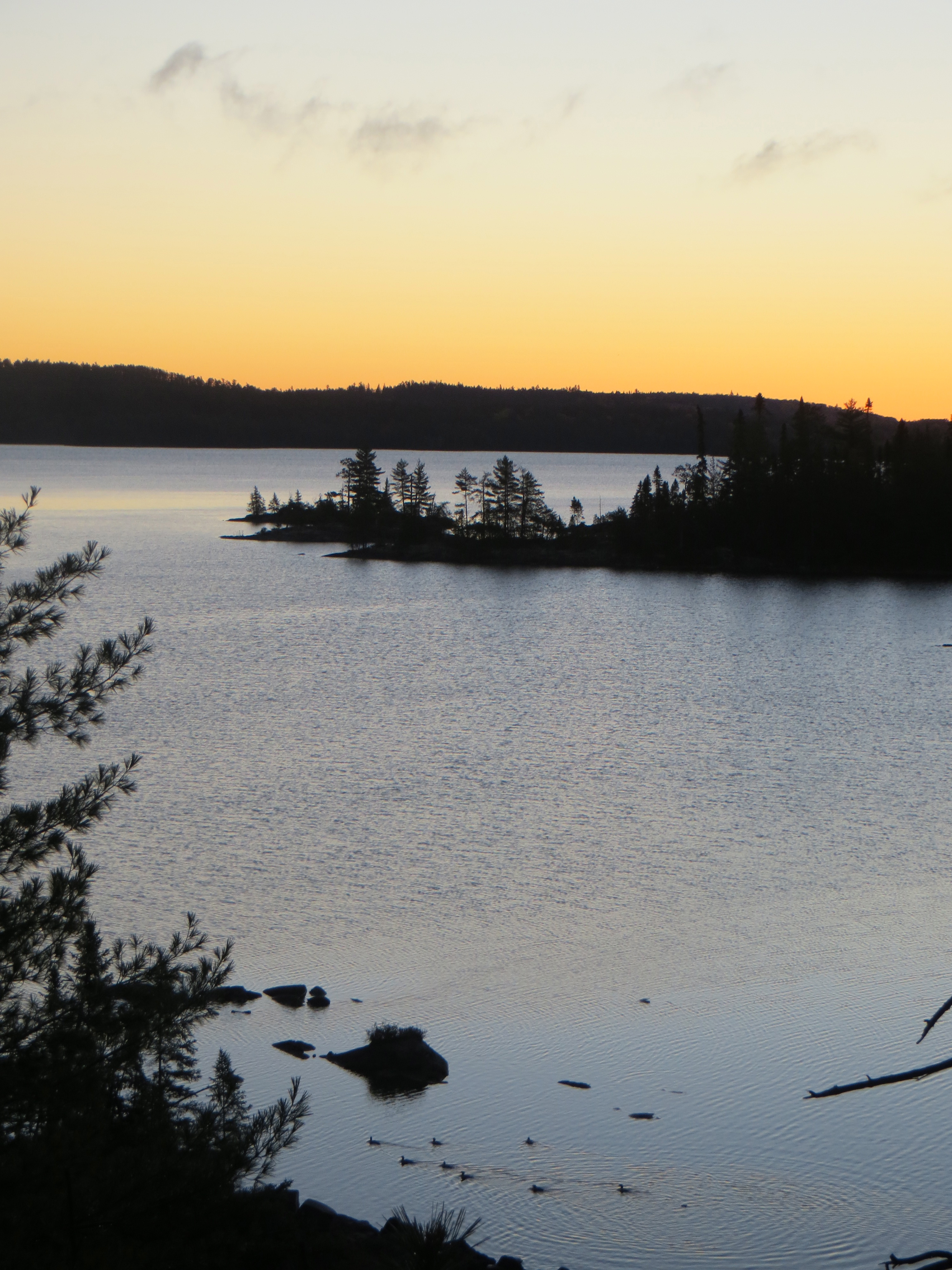 We didn’t see a lot of birds on our trip to Lake Temagami.  I’m assuming that most of them had already gone south for the winter . . . and if so, their timing was impeccable.

We did hear the cries of a few loons — a disconcerting sound if you’re not used to it — and early one morning I saw a flock of ducks land on the water near the island, do some quick diving for grub, and then get into formation and sail regally into the distance. 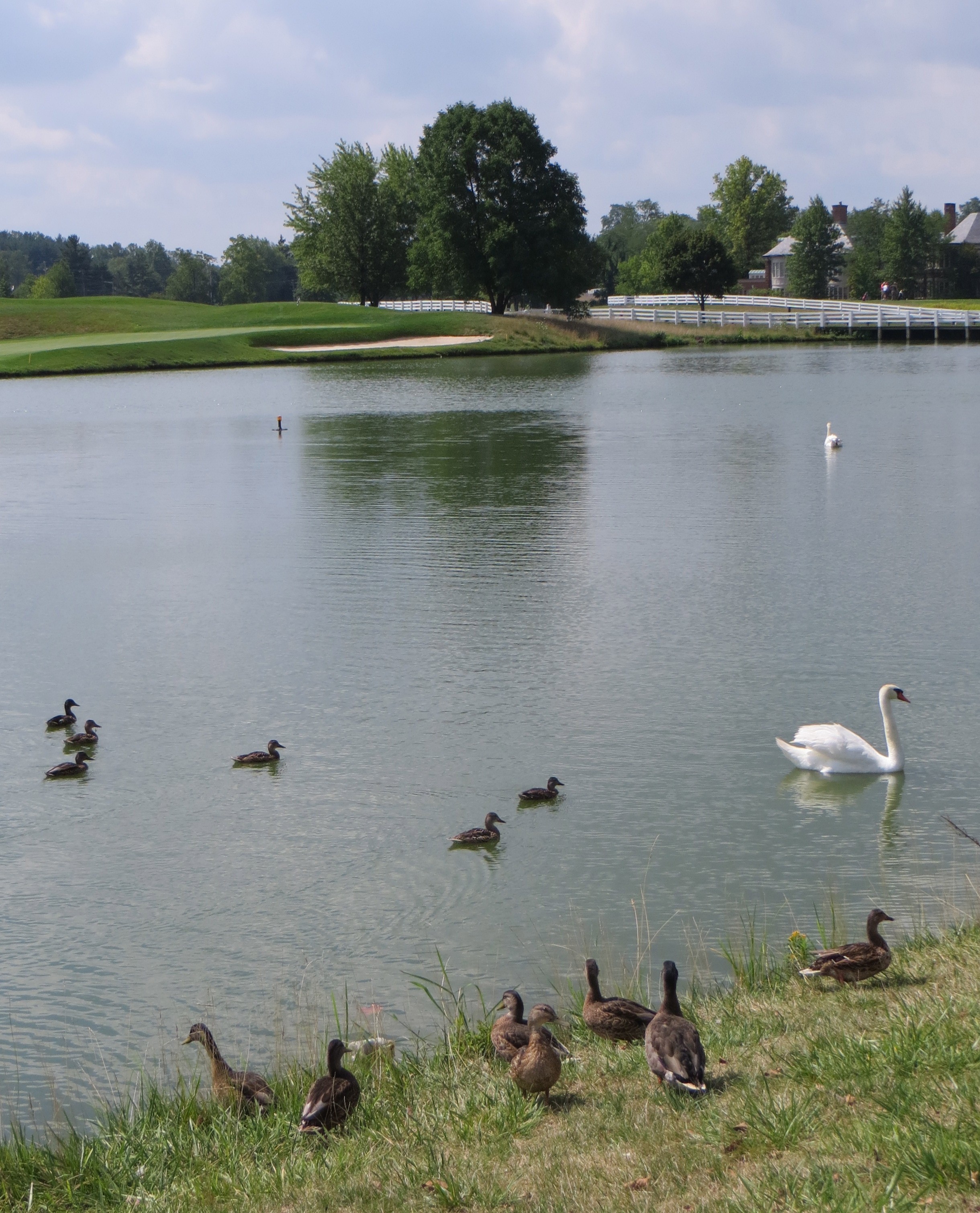 This summer, two swans and more than a dozen ducks call the pond at No. 5 North home.  They always approach when walkers tromp along the boardwalk, in hopes that the passersby might toss some bread crumbs into the water.

Yesterday, as Kish, Penny, Kasey, and I strolled past, the swans and the ducks had spotted a family at the other end of the boardwalk and were making a beeline in their direction, with the regal swan in the lead. 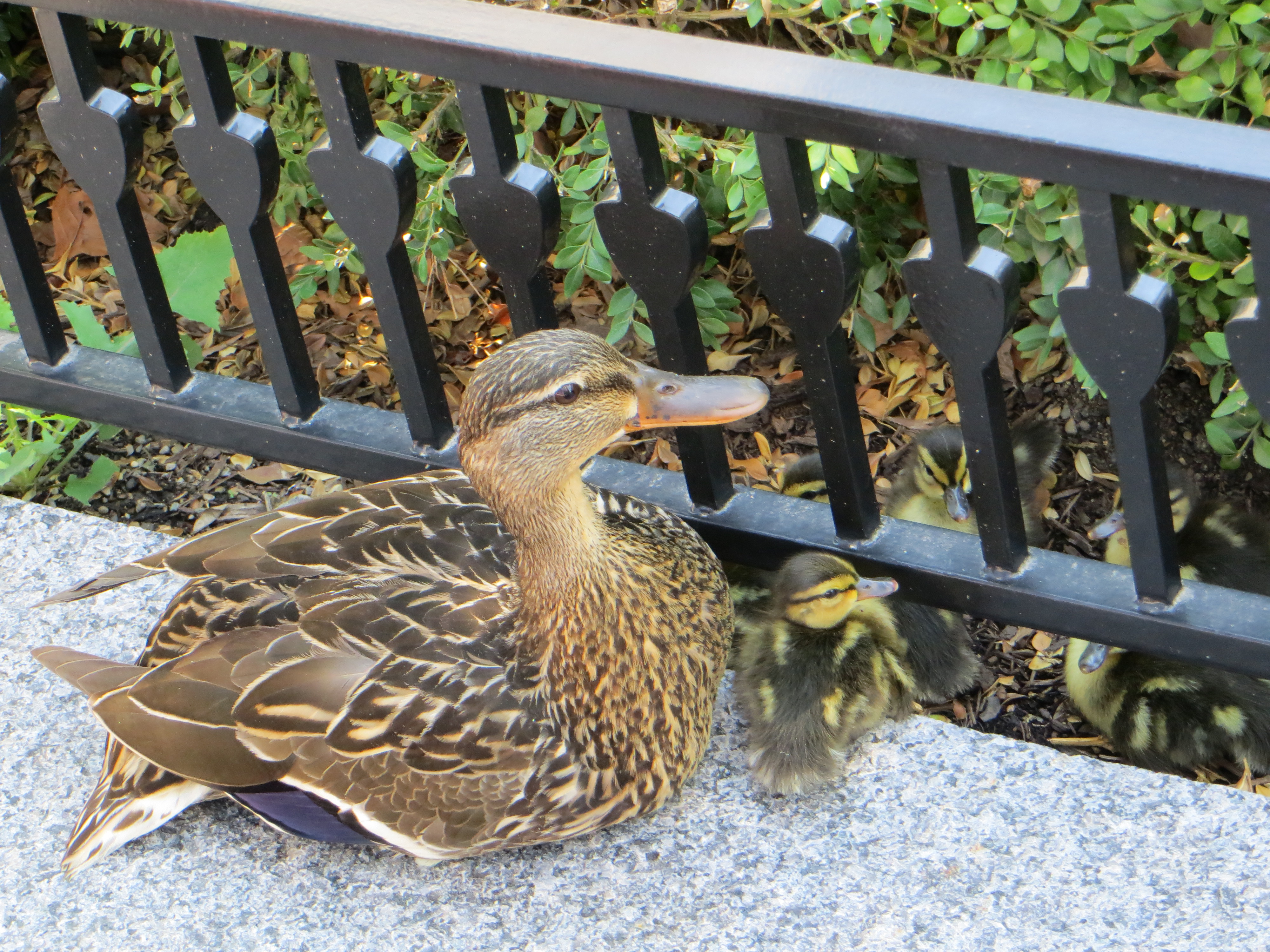 I should add that, as I walked along the Scioto Mile to the Columbus Arts Festival this morning, I ran across a mother duck who apparently had wandered out of the river with her ducklings.  She was fiercely protective of them — particularly when a dog trotted by — and tried to shield then behind a fence as I walked by. 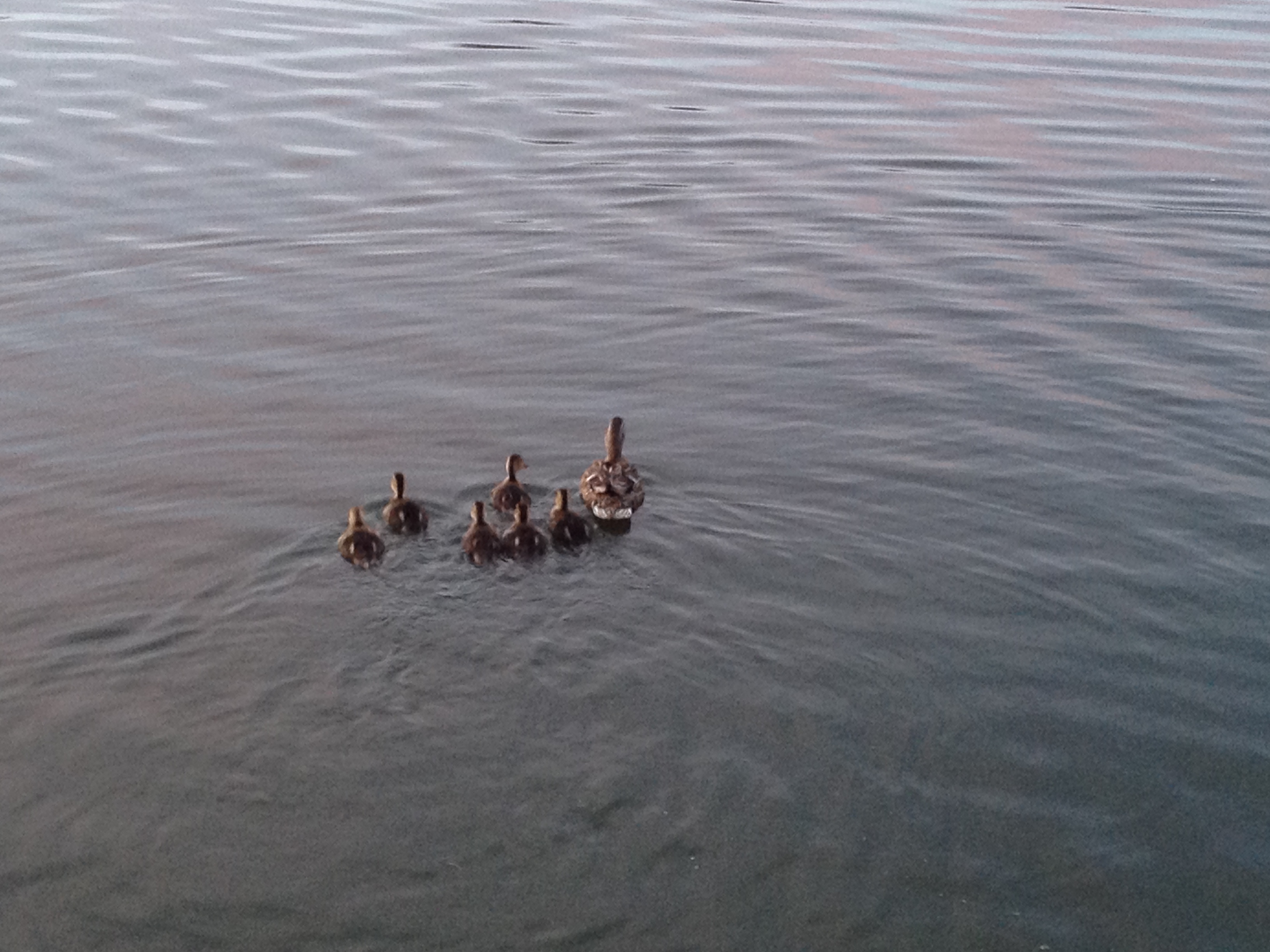 There is a new brace of ducklings — six in all — in the pond on number 5 North.  They were on the boardwalk as we approached on Saturday.  The sight of the dogs caused their mother to herd them, waddling all the way, to the edge of the planks, where they leaped into the water and paddled briskly away. 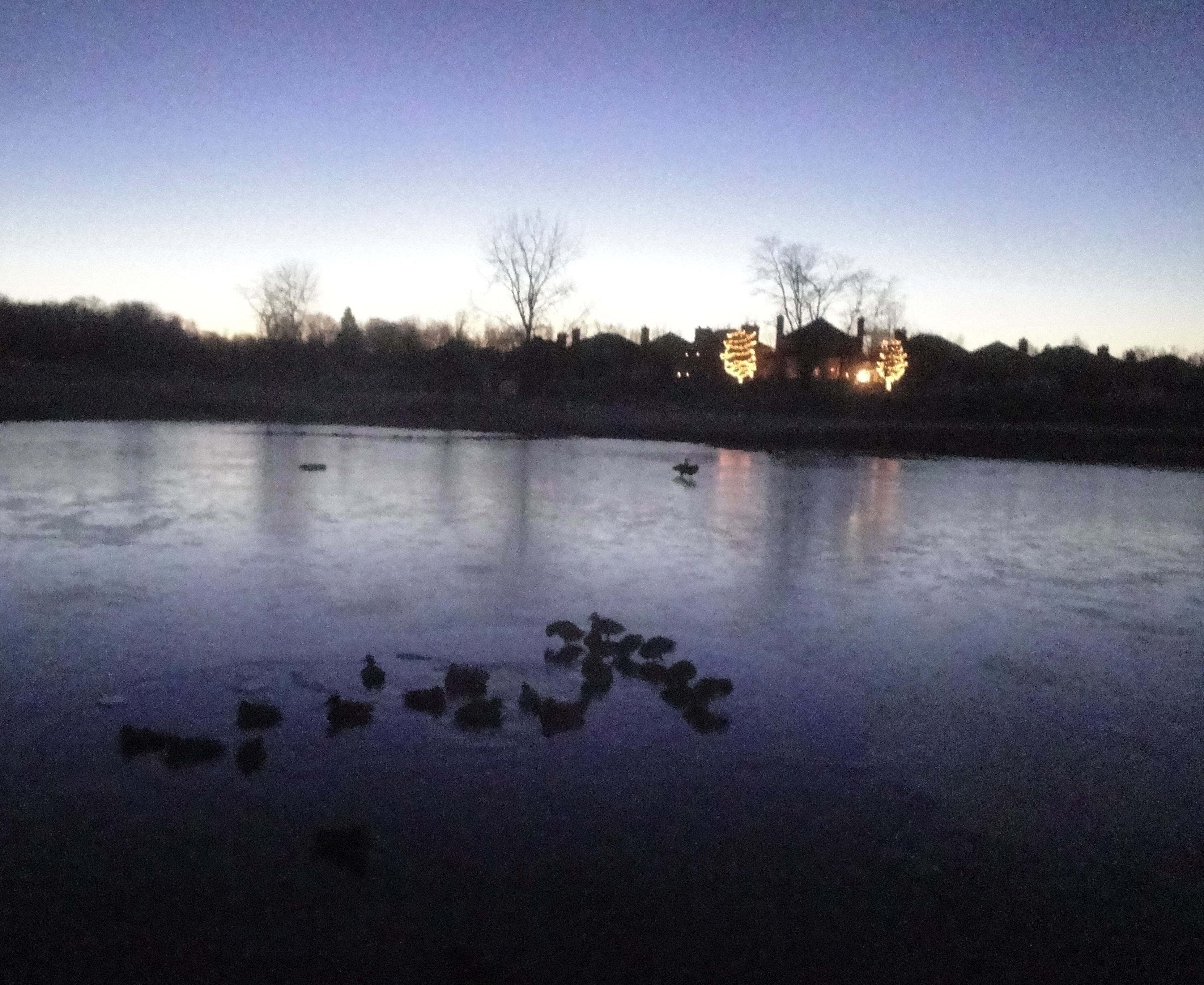 It’s been very cold here recently, and on this morning’s walk Penny and I saw that the pond at no. 5 North is now covered with a sheet of ice — one strong enough to support the weight of a pair of waddling Canadian geese.  The remaining ducks were huddled in the lone, rapidly shrinking unfrozen section, doing their best to stay warm on a frosty morning.