Yesterday Ohio State quarterback Dwayne Haskins announced that he will leave college to participate in the 2019 NFL draft.  Haskins is a redshirt sophomore, which means he will be giving up two years of college football eligibility in order to turn pro. 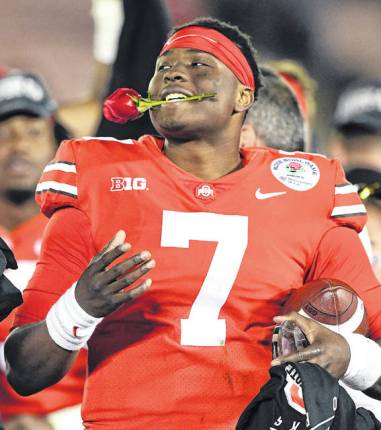 The decision surprised exactly no one.  Haskins was the Ohio State starter for only one season, but in that season he shredded the record books, setting new single-season Ohio State marks for attempts, completions, completion percentage, passing yards, and touchdowns and single-season Big Ten records for passing yards and touchdowns.  He’s easily the best pure passer and pro-style quarterback the Buckeyes have ever had.

He had a remarkable year, and the experts have graded him accordingly.  The NFL Draft Advisory Board, which exists to give college players who are considering leaving school early a sense of where they might go if they stand for the NFL draft, gave Haskins a first-round grade, and he is widely considered to be the best quarterback prospect in the draft and a likely top ten pick.

None of this is a surprise to anyone who follows football.  So why am I writing about Dwayne Haskins going to the NFL?  Because while his decision was predictable, what’s changed has been the reaction to it.  In the past, college football fans used to hold a grudge against players who left early, viewing them as betraying their alma maters to chase the almighty dollar.  Now, there may be some people out there who still hold to that view, but the majority have shifted to a different position.

We see how much money professional athletes can make, we know how that kind of money can be life-changing for the athletes and their families, and we also know that, in a sport as violent as football, you never know whether the next play might inflict a gruesome, career-ending injury.  As a result, for the most part, fans have come to view decisions to turn pro by high-caliber players like Haskins as a rational, reasonable judgments — even though we’d love to see them continue to perform for our favorite college teams.  We get why they don’t want to take a huge risk that they might end up regretting forever.  In short, we’ve reached the last stage of the seven stages of grief and have accepted the way the world now works.

So Godspeed, Dwayne Haskins!  It was fun watching you play football for the Men of the Scarlet and Gray . . . while it lasted.

Many people think that all football players are knuckle-dragging dimwits.  That may have been the case back in the leather helmet days, but it hasn’t been true for a long while — and it’s particularly not true these days, with the complicated offensive and defensive schemes found in college and professional football alike.

If you don’t believe me, watch the Big Ten Network segment above, in which former coach and BTN commentator Gerry DiNardo sits down with Ohio State quarterback Dwayne Haskins to break down a few plays from this year’s Ohio State-Michigan game.  You can’t help but be impressed by how Haskins analyzes defensive coverage, sets offensive blocking schemes, and evaluates his various “reads” — and then explains it all in a coherent, step-by-step fashion using the special vocabulary of football.

Ohio State used to be called Football U.  That’s never been true, not really, but even if it were it’s clear that Football U. does in fact involve a lot of teaching, and a lot of learning.

Yesterday Kish and I drove over to Indianapolis to join friends and watch the Ohio State Buckeyes play the Northwestern Wildcats in the Big Ten Championship Game. We had a lot of fun, and I’d recommend the experience to any members of Buckeye Nation.

The only downside was that I was seated next to Mr. Negativity during the game. He was the kind of angry, muttering jerk who talked non-stop about how much he hated watching the team and voiced loud obscenities after even marginal plays, like a run for no gain. He added a decided element of danger to the game, because you never knew when a bad play might make him start swinging. Fortunately, the Powder Keg never was fully set off. I wonder if he even dimly realized that everyone sitting nearby thought he wasn’t a “fan” at all, but rather a colossal ass.

As for the Buckeyes, it’s been an interesting and successful season. The team is now 12-1, beat Michigan, and topped a gutty and game Northwestern team to win the Big Ten Championship Game. Dwayne Haskins dissected another tough defense and has rewritten the record books, too. Now we’ll just have to see whether the College Football Playoff Committee is considering this question: wouldn’t it be interesting to see what Dwayne Haskins could do against Alabama, and vice versa?

Tomorrow night the Ohio State Buckeyes play under the lights in Dallas, Texas, where they will be matched up against the TCU Horned Frogs.  It will be a coming out party of sorts for Ohio State’s new quarterback, Dwayne Haskins.

For four years, J.T. Barrett held the QB position for the Buckeyes with a vice-like grip.  He was a terrific leader and a real winner — literally.  He set just about every offensive record that a quarterback could set, and under his guidance the Buckeyes achieved great success — but they never quite got to the mountaintop with Barrett at the helm.  Some Ohio State fans, possessed of the loftiest expectations, complained that J.T. didn’t have the arm or the accuracy, and was too quick to pull down the ball and run.  That very vocal segment of Buckeye Nation has been clamoring for a drop-back passer at the QB position.

Well, now they’ve got one, and his name is Dwayne Haskins.  In two games, he’s looked terrific.  Haskins has completed almost 80 percent of his passes, has averaged 270 yards through the air per game, and has thrown for 9 touchdowns against only one interception.  And, so far, at least, his passes are a thing of beauty — arriving on time and hitting receivers in stride and in the hands.  Haskins looks like the real deal.  He may just be the pure passer that Ohio State fans have been dreaming of since Woody Hayes made “three yards and a cloud of dust” synonymous with the Buckeye offense.

But . . . not so fast, folks.  Oregon State and Rutgers, Ohio State’s first two opponents, aren’t exactly national championship contenders.  TCU is a different story.  It’s been in the talk for a berth in the college football playoffs in recent years, and this year it’s ranked in the top 20 going into the game.  And its head coach, Gary Patterson, is a reputed defensive mastermind who will be sure to throw lots of blitzes and weird coverages at Haskins, who’s a redshirt sophomore who will be making only his third start, in hopes of enticing him into turnovers.  TCU knows that if it can get a signature win over Ohio State it will rocket up the rankings and be part of the college football playoff chatter, so we can expect that they’ll leave everything on the field in trying to baffle Haskins and beat the Buckeyes.

Right now, Dwayne Haskins is the young gun.  Tomorrow night, in Texas, we’ll get a better sense of how truly he fires under pressure.