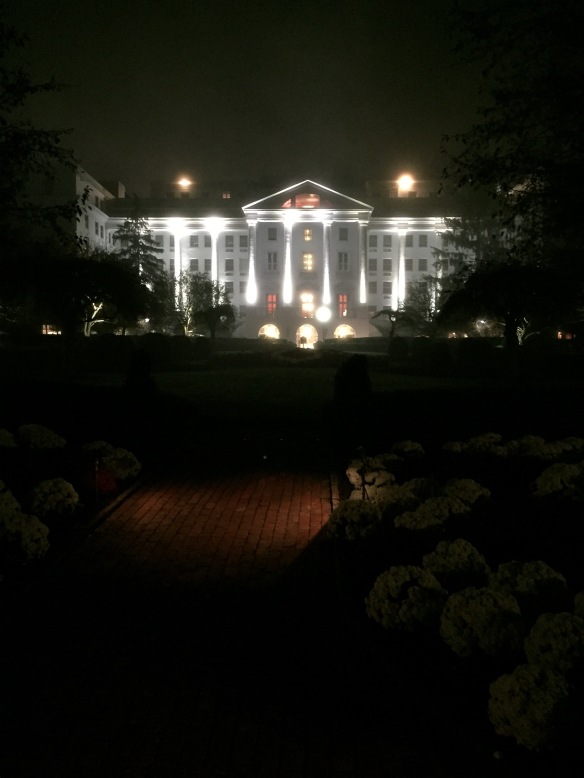 We had to get back to Columbus this morning, which meant we arose before the crack of dawn and were treated to a view of the Greenbrier in the wee hours.  With wisps of fog shrouding parts of the grounds, absolute, not a whisper to be heard silence, and no living soul out and about, the Greenbrier assumed an almost mystical dimension that made you almost expect to encounter the ghost of Dwight D. Eisenhower.  But no ghosts appeared, so we loaded up the car and headed out toward I-64 West. 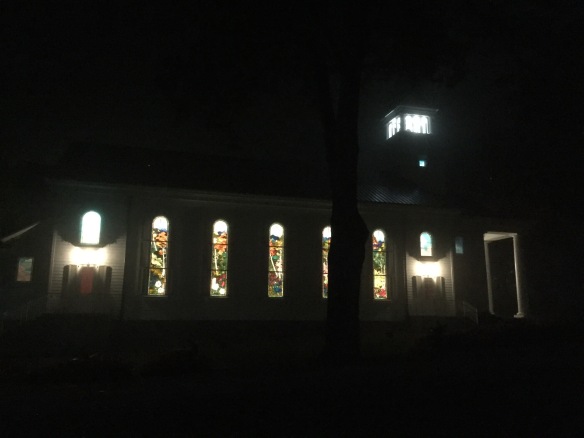 You can’t build a new memorial in Washington, D.C. without there being some controversy about the concept, the design, and the location.  The Martin Luther King Memorial, which opened recently, has experienced its share of criticism — as has virtually every other addition to the National Mall area in the past 50 years.  Now the Memorial to Dwight D. Eisenhower is being dogged by controversy.

Eisenhower clearly was one of the greatest Americans of the last century.  He led the Allied Expeditionary Force that invaded Europe and defeated Nazi Germany.  In that role, Eisenhower showed extraordinary political instincts and the ability to meld, and placate, disparate nationalities and personalities.  He was elected the 34th President, served for two terms, and left office a popular figure.  During the Eisenhower years America was prosperous and at peace, focusing on huge internal improvements like the interstate highway system and social and cultural developments like rock ‘n’ roll and television.  The Cold War with the Soviet Union was underway in earnest, and Eisenhower deftly managed to keep intermittent crises from turning the Cold War into a hot one.  His presidency also saw the federal government taking an increasing civil rights role that culminated in Eisenhower’s decision to send federal troops to ensure the integration of Central High School in Little Rock, Arkansas.

How do you memorialize such a figure?  The Eisenhower Memorial designed by architect Frank Gehry contemplates an area in which three large metal tapestries create an interior space.  The tapestries will feature images of Kansas, where Eisenhower was born.  Within the tapestry walls will be green space, passages from three Eisenhower speeches, and three depictions of Eisenhower — as a barefoot boy, as a general, and as president.

Eisenhower’s descendants don’t like the design.  They wonder if the metal will rust, they don’t like the focus on his boyhood rather than his accomplishments, and they want the work on the memorial to be postponed to allow for reassessment of the design.  Other critics call the design “ghastly” and say the memorial fails to really communicate why Eisenhower was such a significant figure — which, they submit, is one of the main reasons for a memorial in the first place.

The opposition to the design caused the National Civic Art Society to hold a contest seeking a more classical design.  The winning entry proposes a memorial arch with depictions of Eisenhower as general and as president along with two fountains.

The National Mall area is like America’s town square.  We all feel a special pride about it, and we all have an opinion about how it should look.  Some people love the classical designs and want only more of the same.  Others urge that we experiment with other styles and approaches.  I’m not sure Americans care a great deal about the design; I think they care more about the concept and the execution.  The Vietnam War Memorial was controversial when it was proposed — depicted as a sad, black gash in the ground — but it is now a must-see for most Americans who visit Washington, D.C.  That memorial, with its somber, sinking feeling and the grim weight of those thousands of individual names, is as impressive and awesome in its own, unique way as the nearby Lincoln Memorial is in its classical fashion.

So, I’m not opposed to the concept of metal tapestries, per se, so long as they are created to withstand rust and the elements.  Instead, I question what is depicted on the tapestries.  Eisenhower certainly was shaped, in some part, by his Kansas childhood, but there was much, much more to his life.  Bucolic scenes of rolling countryside don’t communicate anything about the man, his beliefs, and his achievements — and indeed seem to distract from them.