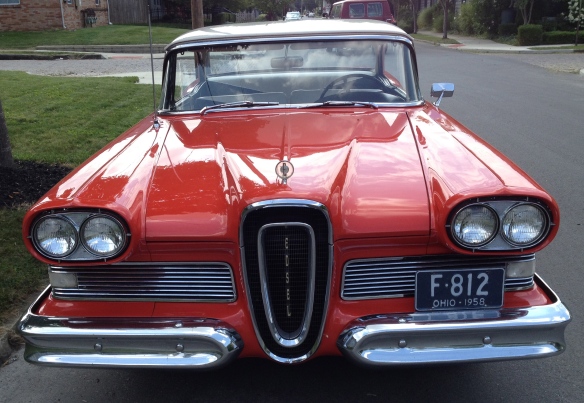 Its name is right up there with the Titanic:  a proper noun that, as a result of unfortunate circumstance, has morphed into popular language as a shorthand reference for disaster.  In this case, it is a corporate disaster — a highly marketed, ridiculously expensive roll-out of a new product that utterly fails to appeal to the masses.  It has endured for almost 60 years as the ultimate business failure, has survived challenges by New Coke and Betamax VCRs and countless other duds, and still tops the lists of absolute flops. 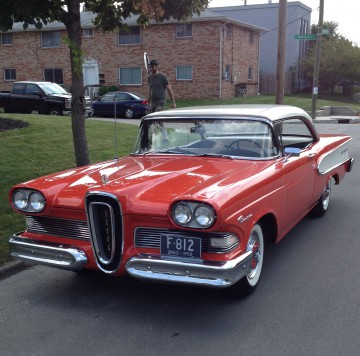 So when I saw a vintage, perfectly preserved 1958 Edsel — the year the car was first introduced to the American public — parked on the street yesterday, I just had to stop, give it a close, 360-degree inspection, and take these photos.  It was a big, gleaming, two-toned, orange-and-cream-colored beauty, with plenty of chrome that caught the sunlight just right — a classic example of a ’50s-era American car.

The reality is, the Edsel is a beautiful vehicle, and its allure is made all the more intriguing by the scent of failure and catastrophe that lingers around it.  I wasn’t the only passerby to stop, give a low whistle, and check it out. 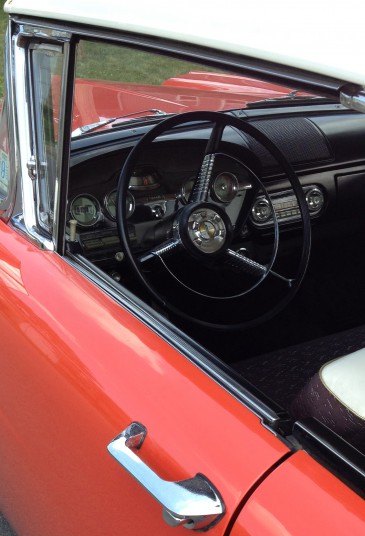 The back story of the Edsel is a familiar one.  Named for the son of Henry Ford, the Edsel was an effort by the Ford Motor Company to introduce an entirely new car brand that featured new approaches to standard car features. Ford and GM were in their glory days, and GM had a family of car brands that would allow car-hungry, upwardly mobile Americans to progress from the cheaper ones all the way up to Cadillac.  Ford, on the other hand, had only three brands — Ford, Mercury, and Lincoln.  Ford’s “dream big” solution was to create an entirely new brand.

The Edsel was heavily promoted in advance, in one of the first huge, post-World War II marketing campaigns, with ads that featured tantalizing pictures of shrouded models and suggested that America was on the cusp of an entirely new driving experience.  Then the Edsel was finally rolled out, with great fanfare, on one day in September 1957.

And the Edsel bombed, completely.  It was such a colossal failure that, despite sinking huge amounts of money into the effort, only a few years later Ford recognized the inevitable, production on the Edsel ceased forever, and its name entered the lexicon as synonymous with corporate catastrophe. 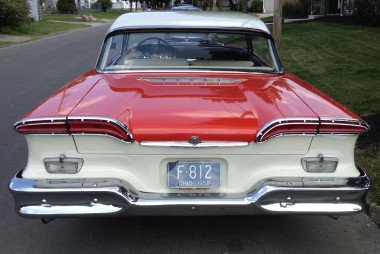 Why did the Edsel fail?  Countless people have weighed in on that core question, and no doubt the Edsel is still and will always be a case study in MBA and Marketing programs across the country.  And people have identified lots of potential reasons.  The economy was just moving into recession as the Edsel was introduced.  The marketing campaign had raised public expectations so high that no product, no matter how great, could possibly match them.  The Edsel was too technologically advanced, with a push-button transmission set-up in the middle of the steering wheel and other novel features.  Ford tried to do too much by creating an entirely new car brand, with 18 new models and more than 1000 brand-new dealerships. 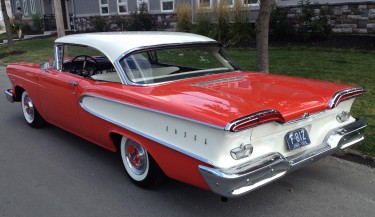 And some of the reasons even target the American car-buying psyche.  Some people argue that the top-of-the-world Americans of the ’50s were looking for huge, overpowered, rolling phallic symbols that would serve as tributes to their masculinity.  The Edsel’s distinctive front grille, they say, not only did not have the phallic element that Americans instinctively craved, but in fact suggested the exact opposite.

Why did the Edsel fail?  I’m glad to leave that question to the academics and armchair psychologists and marketing gurus and corporate planning executives.  All I know is that when I see an Edsel on the street, I’ll gladly give that low whistle and take a good look at what remains a very cool car.