The other day I was walking past the Ohio Statehouse when I noticed a sign that I’d never noticed before — the green one, down there below the blue parking signs, that says “Electric Vehicle Charging Station.”

When I was a kid my mother often said “you learn something new every day,” and she was right.  I had no idea that the Ohio Statehouse had a charging station. 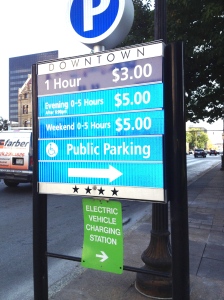 In fact, the Statehouse has six charging stations in its underground garage.  They were built and unveiled in 2011, at a total cost of $35,770.  No state funds were used; instead, the stations were built through grants from Clean Fuels Ohio and the U.S. Department of Energy and contributions from Honda of America, General Motors, Eaton Corporation, and Professional Supply, Inc.  Anyone using the stations pays 50 cents an hour for the electricity they draw, and the stations are supposed to be able to take an electric car battery from zero to full in six to eight hours.

I’m sure that there are electric cars in Columbus, but I don’t think there are very many.  I found myself wondering how often those six charging stations are used, and whether all six have ever been used at the same time.  I looked a report on the internet about usage of the stations, or how much has been paid for electricity, but I was unable to find anything.

Is the usage of the charging stations meeting the expectations that existed when they were announced, with some fanfare, three years ago?  I doubt it.  I wonder how many “green” initiatives end up not really panning out or producing the hoped-for results.  In the meantime, that little green sign looks kind of bent and lonely, doesn’t it?