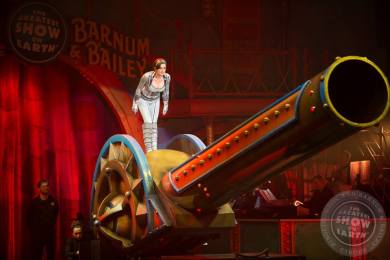 It’s another American institution clanking to an end.  Once, people in America were excited when the circus train rolled into town, with a circus parade down Main Street to let everyone know that it was time to come out to some nearby lot, sit under the Big Top, smell the sawdust, eat some peanuts, and watch the spectacle.  But tastes change, and the organizers of the circus have cited those changing tastes, reflected in declining attendance, as one of the reasons for the end of the circus.  Other reasons include high operating costs and the impact of a long dispute with animal rights advocates about using animals in the circus — a fight that ended with the decision in 2015 to cease using elephants in the show, which itself caused a significant drop in attendance.

I remember going to the circus when I was young.  I wasn’t one of those kids who dreamed about running away to the circus and romanticized the itinerant life of circus performers, but I did enjoy the show, and so did UJ and my grandparents.  I remember the bustle of the place, and the constant activity in the three rings, and the awesome sight of the people way up on the flying trapeze so far overhead.  I also remember the distinctive smell — a wild, heady combination of animals, dust, and human sweat, all charged with a kind of electricity running through the crowd when one of the more hazardous acts was being performed.  Now, though, kids apparently don’t have the same attention span; they won’t sit still for the hours needed to watch the full run of the circus show and end up fiddling with their cell phones and texting their friends.

It’s ironic, too, that the real circus is announcing its end just as the Trump Administration is getting ready to take office.  Based on what we’ve seen in the run-up to Inauguration Day, from both the new President and his Administration, its protesters, and its diehard opponents, American politics is going to be a wild, death-defying ride, full of surprises and unexpected actions at every turn.  Who knows?  Maybe these days we can only deal with one circus at a time.

Today the Ringling Bros. and Barnum & Bailey Circus announced that their circus will phase out the elephant acts from The Greatest Show on Earth.  The last 13 performing elephants will retire as of 2018.  As far as I’m concerned, it can’t come soon enough.

I loved the circus as a kid — who wouldn’t love the Death-Defying Trapeze Acts, the three rings, the Big Top, the tumblers and jugglers, the tightrope walkers, the clowns in their little cars, the smell of sawdust and peanuts and mustard, and the bright, piping sound of the calliope? — but I never liked the elephant acts and tiger acts.  While I marveled at the colossal size of the pachyderms, I felt sorry for them as they raised up to put their forelegs on each others backs, fell to the ground with an earth-shaking thud, and were put through the rest of their little routines at the crack of a whip.  Elephant faces always looking intelligent to me, and their eyes seemed sad.  I always thought they didn’t like what they were doing.

The circus officials said they came to this decision on their own.  Animal rights advocates say it is the product of years of protesting and lobbying their part.  I don’t care who is responsible for the decision, really, and I doubt that the elephants do, either.  I’m just glad the elephants won’t be a circus act any more.