The Ohio State Buckeyes did what they had to do yesterday.  On a beautiful fall day, they pounded the Eastern Michigan University Eagles, 73-20, to complete an undefeated September.  Now the Big Ten season begins, and the Buckeyes will be required to leave the friendly confines of Ohio Stadium.  The first test will come next Saturday, when Ohio State will play at Illinois.

A few random thoughts from the EMU game:

Obviously, the Buckeyes played well offensively.  You know your team has had a good day when it racks up 73 points, 30 first downs, and more than 600 yards in total offense.  Eastern Michigan looked totally overmatched, physically, against the Ohio State offense, but players still have to execute.  Quarterbacks have to throw the ball with accuracy, receivers have to catch, and so forth.  Even against an outgunned opponent like EMU, putting 73 points on the board is a notable accomplishment.  Regardless of the quality of the opponent, Terrelle Pryor will always remember this game, where he threw for four touchdowns, ran for another, and caught a pass for yet another.  Dane Sanzenbacher, who caught four touchdown passes, isn’t going to squawk that they all came against the EMU Eagles, either. 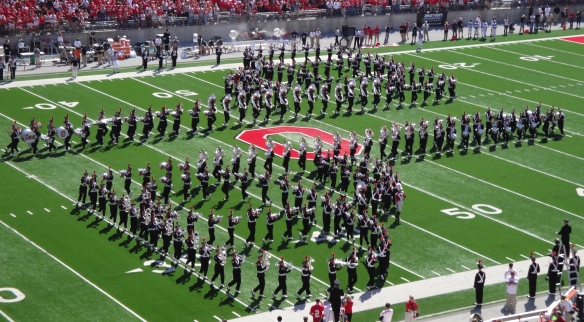 like the Buckeyes’ use of a hurry-up offense.  I think Ohio State has lots of offensive weapons, and playing at a quick tempo when you have the other team on their heels is just good strategy.  It also makes it easier to run trick plays, like the Jordan Hall pass to Terrelle Pryor.  Finally, it causes the offense to play with special aggressiveness and is good preparation for games where the Buckeyes will need to run the two-minute drill.

My only concern about the offense was the lack, again, of a consistent ground game by the OSU running backs.  Although the Buckeyes had more than 340 yards rushing, they still struggled to get consistent push against EMU when the first team was on the field, and much of the yardage that was gained was on Terrelle Pryor scrambles.  As the weather gets colder, Ohio State will want Boom Herron, Brandon Saine, Jordan Hall, and Jaamal Berry to shoulder more of the load and show that they can get the tough yards when the game is on the line.

Defensively, Ohio State stopped the run and was able to get consistent pressure on the passer.  However, EMU exposed some weaknesses in the OSU secondary, where a number of players are banged up.  The Eagles’ quarterback, Alex Gillett, played a fine game and made some unbelievably good throws under pressure.  He also gashed the middle of the Buckeye defense with big throws to the tight end.  I’m glad some of these issues were exposed in this contest, when the outcome was not in doubt, rather than later in the season during the closing minutes of a big game.  My guess is that the Ohio State coaches will work on the linebacker drops and hope that the dinged-up members of the secondary get healthy.

Finally, there were no special teams mishaps and no significant injuries.  The latter point may be the most important point of all.

Ohio State plays the Eastern Michigan University Eagles today.  The Eagles play in the MAC, and they aren’t very good.  In fact, they’ve lost 15 games in a row.  As a result, Ohio State is a prohibitive favorite to prevail in the match-up.

Today’s contest will be one of those games where Ohio State really can’t win.  You’re expected to pulverize your opponent.  If you don’t, questions get asked.  If you do, pundits criticize you for playing a patsy and give you no credit for the victory.  So, about the best you can hope for is that you notch a win, escape without an injury, and get some game experience for your back-ups.

Although the EMU team name is the Eagles, I can’t help but associate them with another species of bird — the emu, a large, earthbound bird that is native to Australia.  Let’s hope the Buckeyes keep EMU from taking flight today and can put another one in the win column without ruffling too many feathers.