At last night’s game we got a free Edwin Encarnacion jersey.  It’s the traditional design, in a size large enough to comfortably fit most reasonably sized people, and looks pretty sharp.  The jersey features that “press-on” type lettering, however — which means I’ll be giving it kid glove treatment.

I first learned this important life lesson in 1973, when I used my Big Bear bag boy earnings to buy a cool orange Eric Clapton t-shirt with a press-on picture of the Guitar God on the front.  (I know . . . “cool” and “orange t-shirt” are rarely used in the same sent, but you must remember it was the ’70s.) I wore it, put it in the laundry basket for Mom to wash, and got back a fundamentally changed garment.  The shirt had shrunk about five sizes and the picture of Clapton had become a cracked, crumbling, unrecognizable mess.  Gah!  But, because I paid for it with my own money, I continued to use it as one of the t-shirts I wore under my jeans shirt — and avoided buying press-on t-shirts thereafter.

It may be that press-on technology has improved in the last 45 years, but I’m not taking any chances.  The EE jersey won’t be seeing the washer, ever.

I probably first played air guitar when I was 13 or 14, after we moved from Akron to Columbus.  We were living in a bigger house and I had gotten my own room, which I equipped with a radio and with the family’s hand-me-down record player, a cheap and unsteady Panasonic unit with plastic speakers.  In that little enclave of my own, I really started to discover rock music beyond The Beatles and The Monkees.

Like many teenaged boys, I was drawn to the guitar gods of the day — Eric Clapton, Jimmy Page, Keith Richards, Ritchie Blackmore of Deep Purple, and others, the slouching, long-haired titans who delivered the intricate, crushing solos that kicked your spirits into another gear and managed to look uber-cool while doing so.  I saw clips of their performances on the late-night music shows and how they looked while playing. 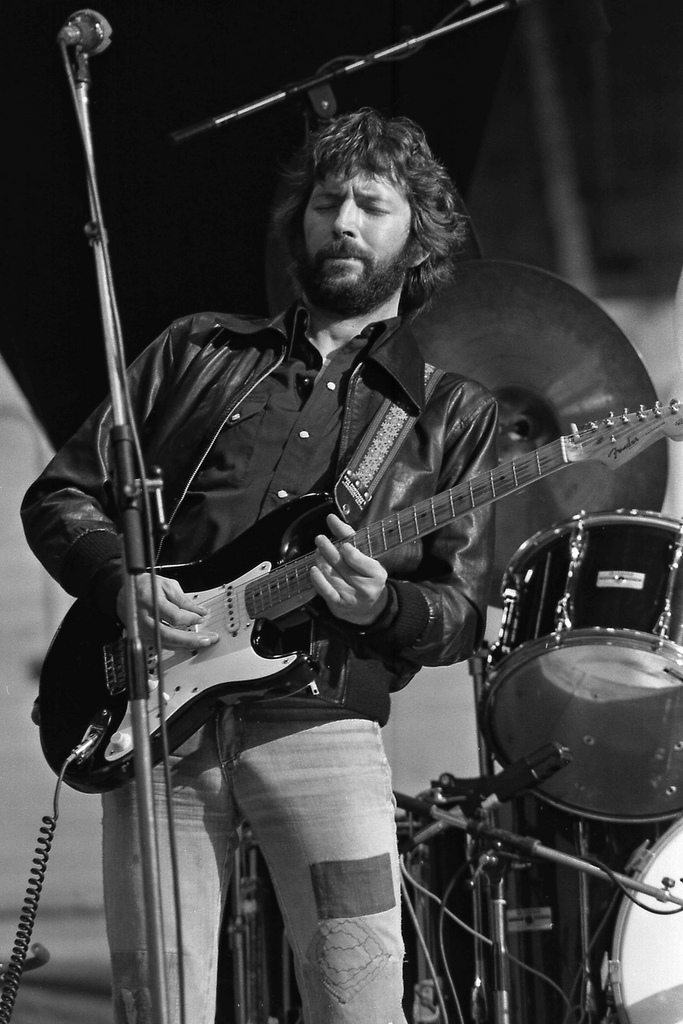 So, was it really so surprising that, when you put a song like Led Zeppelin’s Stairway to Heaven or Cream’s Crossroads or the Rolling Stones’ Monkey Man on that flimsy Panasonic turntable and felt the surge of energy that those songs inevitably produced, a little air guitar solo would surface?  When you were in the grip of those songs, you had to do something to participate, and the choices boiled down to playing air drums with the John Bonhams and Ginger Bakers and Keith Moons of the world — or playing air guitar.  I chose air guitar, even though I had no idea what I was doing and whether my chord-fingering on the air fretboard and picking and strumming on the air strings bore any relation to guitar-playing reality, and even though I knew I looked silly doing it.  It just felt like the right thing to do, and it was fun, besides.

It still does, and still is.  Even now, more than 40 years later, if you put me alone in a room and start playing Derek and the Dominos’ Key To The Highway or Deep Purple’s Smoke On The Water or Lynyrd Skynyrd’s Call Me The Breeze, the impulse to play a little air guitar (and in the latter case, a little air keyboards, too) and feel like a kid again while doing so will be irresistible.  Those songs are like a kind of time machine that transports me back to that poster-filled room with the scratchy Panasonic unit playing at the loudest decibel level I dared, and my guess is that the same is true for many of us fifty-something guys.

It’s nice to know that, lurking under the extra pounds and the grey hair and the aching back, there’s a little bit of that teenager energy and silliness still to be found.

This YouTube clip of Eric Clapton performing the song with the Allman Brothers Band — in recognition of Duane Allman, one of the essential members of Derek and the Dominos — is pretty darned good.  But then, I could listen to Eric Clapton play just about anything and still be a happy camper.

Today is Eric Clapton’s 65th birthday.  When I heard that as I drove to work this morning, it made me stop for a moment — and then the memories of all of the Eric Clapton music I’ve heard and loved came roaring into my mind and I was sucked back to my teenage years and the right rear bedroom on the second floor at 2440 Buckley Road in Upper Arlington, Ohio.

You see, I’ve loved Eric Clapton’s music since I finally got my own room as a teenager.  In that room I had a cheap stereo system with two tiny, blue felt-covered, plastic speakers that I mounted on the wall (poorly), and on that cheap system I played Eric Clapton’s records constantly and at maximum volume.  I had several double-record greatest hits albums — one called, I think, History of Eric Clapton and another called Clapton’s Greatest Hits — as well as what I still think is the greatest teenage boy air guitar album ever made:  Layla and Other Assorted Love Songs.  Clapton’s career had a hiatus of sorts after that legendary album, then he came back with 461 Ocean Boulevard and a terrific live album called E.C. was Here.  I bought and played and loved all of his records then, and I continue to love his stuff now.  Clapton helped to introduce me, and no doubt entire generations of music fans, to blues music, which he played faithfully yet with his own indelible stamp.

Clapton, who was known to some as Slowhand, had an amazing career by the time he was 30.  As a kid he played with John Mayall’s Bluebreakers and the Yardbirds, and then he formed two of the earliest rock “supergroups,” in Cream and Blind Faith.  He played with the Beatles on While My Guitar Gently Weeps, and George Harrison wrote Here Comes the Sun in Clapton’s garden.  By 1970 Clapton was the quintessential guitar hero who set songs alight with incredibly fast, liquid guitar chords that hit you deep in your gut.  He collaborated to extraordinary effect with Duane Allman on the Layla album, played on The Band’s The Last Waltz, has performed and recorded with a variety of blues greats and countless other rock artists, and has continued to make terrific acoustic and electric music up until the present day.  His concerts — and I was privileged to see him perform once, in upstate New York in the ’70s — are legendary for the quality of their music.  His official website reports, incidentally, that he will be in concert again this summer in Europe.

It’s hard to pick my favorite Clapton songs.  There are so many of them — Cream’s extraordinary Crossroads and massive, pounding Sunshine of your Love, the delicate recording of Can’t Find My Way Home by Blind Faith, Let it Rain, Farther on up the Road and Drifting Blues from E.C. was Here, the excellent and note-perfect Worried Life Blues and many other songs from his The Blues double-CD set, his acoustic Layla on MTV’s Unplugged, and a number of songs on his recent CD with J.J. Cale, The Road to Escondido.  For my money, however, the crowning achievement of his career was the Layla double album and his astonishing playing with Duane Allman — on Layla, on Have You Ever Loved a Woman, on Nobody Knows You When You’re Down And Out, and, most brilliantly, on the 9-minute, 41-second opus, Key to the Highway, a sinuous conversation back and forth between Clapton’s alternately sharp and ragged guitar and Allman’s slide, each trying to top the other in inventiveness and craft.  I think it is one of the great rock recordings ever made.

It’s really kind of stupid for someone like me to write about Clapton, because his music says so much more than words can.  And so, in honor of E.C.’s birthday, here is a more fitting tribute — a video of a 2001 acoustic performance of Key to the Highway:

There’s no point in getting too downcast about the economy and the weather — it is what it is.  This clip of Joe Cocker singing Feelin’ Alright with a little help from Eric Clapton, Ron Wood, and some other members of the Rolling Stones should make everyone feel a little better.