If you’ve read or heard about the “affluenza” kid, you’re probably angry. 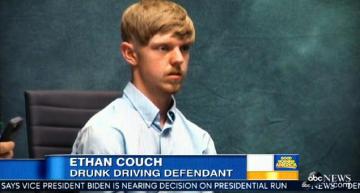 The kid’s name is Ethan Couch.  When he was 16, he went driving while drunk and struck and killed four pedestrians near Fort Worth, Texas.  Prosecutors wanted him to spend 20 years in prison.  Instead, his case was heard in juvenile court, where an expert testified and Couch’s attorney argued that Couch suffered from “affluenza” — the purported inability to tell right from wrong because he’d been spoiled by wealthy parents who never punished him for misbehaving.  (“Affluenza” is not a psychological condition recognized by the Diagnostic and Statistical Manual of Mental Disorders, although psychologists have no doubt that chronic spoiling of kids influences their behavior.)

To the outrage of the local community and the relatives of those killed in the drunk driving accident, the juvenile court judge did not sentence Couch to any jail time.  Instead, he got 10 years probation and had to do a stint at a rehab facility.  The lack of substantial consequences caused some people to argue about the injustice of our justice system — where the rich, who can hire the best lawyers and experts, can perversely argue that their own wealth can render their kids not culpable when they commit heinous crimes and kill multiple people.

But the “affluenza kid” did it again.  Ethan Couch allegedly drank alcohol at a party, in violation of his probation, and was being investigated by authorities.  Rather than face the consequences, Couch and his mom, Tonya Couch, fled to Mexico, where Couch died his hair and they hung out at the resort town of Puerto Vallarta.  But — in a nice little “affluenza” touch — authorities say that before they skipped town they had a going-away party for Couch and his friends.

Now Couch and his Mom have been caught, thanks in part to information provided by friends of the family, so we get to see some dead-eyed perp pictures of Couch and his dyed chin whiskers.  Couch’s Dad, who runs a successful business, apparently was one of the people who cooperated with authorities and is not suspected of being involved in his wife and kid’s decision to flee the U.S.

Unfortunately, Ethan Couch probably isn’t going to deal with much in the way of consequences for this misconduct, either.  Because Couch is still subject to the juvenile court system, and will be until he turns 19 in April, prosecutors say he is likely to face no more than 120 days in detention — after which he would be released, subject to another period of probation.   Tonya Couch, on the other hand, is going to be charged with hindering an arrest, which carries a sentence of two to 10 years.

It’s an infuriating and sordid story of a spoiled brat who apparently suffers no guilt from killing four people, was too stupid to recognize that he was lucky enough to get a second chance and blew it, and likely still won’t face punishment that is commensurate with his crime, and an enabling mother who probably spoiled the kid in the first place.

I don’t think it’s likely that Ethan Couch will become a productive member of society, and I hope he one day will be held accountable for his crimes.  As for his mother — who is supposed to be the adult in this situation — I hope they throw the book at her and get the maximum sentence, because somebody needs to actually feel the long arm of the law for making authorities engage in an international manhunt.  Who knows?  If Ethan Couch and his “affluenza” are incapable of distinguishing right from wrong, maybe he’ll at least feel some remorse for sending Mommy Dearest to the Big House.