The Wrestling Fan and his lovely wife recently spent a few weeks hiking around Turkey.  He returned from his travels with a gift for us — a blue pendant with an eye-like set of concentric circles on the front. 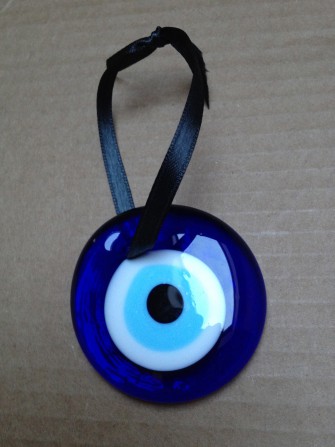 Called a nazar (in Turkish, the Nazar Boncugu) the little pendant is supposed to serve as a kind of good luck charm that can protect you from the ravages of the “Evil Eye.”  The notion that people can give you the “Evil Eye” — whether through witchcraft, or sorcery, or deviltry, or simply through the sheer force of outright, pulsating human envy and hatred, that certain people can hurt you with a glance — is one of the oldest superstitions known to homo sapiens.  And that superstition still has legs.  According to the WF, this little blue pendant is the most popular souvenir in Turkey, sold and seen everywhere.

It was nice of the Wrestling Fan to get us some protection from the Evil Eye.  But now we are faced with a true quandary:  where do we most need this important personal shield?  It would be great to have it at the office, where I probably could use every bit of help, from any source, in resisting the depredations of opposing parties and counsel.  However, I don’t want to hog the protection.  You never know when Kish might need the nazar on the homefront, to fend off the evil antics of slow-moving service providers.  And for that matter, maybe it’s greedy to keep the nazar to ourselves.  Let’s face it — the entire city of Cleveland could use a Nazar Boncugu to help one of its sports teams finally win a championship one of these years.

Now that I think about it, I wish the WF had packed a few more nazars into his suitcase.

In America, spitting is frowned upon, unless you are in the dentist’s chair and have just been handed a cup of mouthwash or are participating in a watermelon-eating contest.  My grandmother called spitting a “filthy habit.”  It is flatly contrary to the rules of etiquette and the norms of polite society.  Still, people keep doing it.  Earlier this year, for example, Tiger Woods was ripped by commentators and viewers, and then fined, for spitting on the golf course, and he later apologized for his “inconsiderate” behavior.

I think people keep spitting because our mouths are a very effective spit-ejection device, and spitting actually feels pretty good.  Your mouth and tongue taste foul and rank and then, suddenly, they don’t anymore.  In some cultures, spitting is much more common, and in others spitting is considered to be a way to ward off the “Evil Eye” and evil spirits.  (Apparently evil spirits have very tender sensibilities about the act of returning moisture to the environment.)  There is an innate, childlike pleasure in spitting, too.  You feel the exquisite, gathering heaviness of the saliva swirling on your tongue before you are ready to launch.  You can go for distance or work on accuracy.  And you know it’s naughty, bad boy behavior — which just makes it a bit more fun.

I’m not suggesting that people should spit on or at each other, or go around spitting on public streets as a matter of routine.  I’m just saying that, in the right place and at the right time, there is nothing quite so satisfying as a good spit.