We’ve had the blue Beemer for nine years and put on more than 100,000 miles.  The car has patiently endured paint splashes, clipped side-view mirrors, fender benders, coffee spills, and lots of dog hair.  It has borne us to and from faraway places, lugging loads of happy people, dozing dogs, suitcases, paintings, and stray furnishings.  It has delivered reasonably good mileage.  And it has continued to serve for years after it was paid off, requiring only periodic maintenance in order to provide the essential of reliable daily transportation. It has become a kind of member of the family.

But to every thing there is a season, and for the little blue Beemer the season of change came when the alternator gave up the ghost on I-77 and had to be replaced.  The worm of doubt about its continuing reliability was introduced, and with that its hour of career change inevitably drew nearer.  So today we trade it in for a new Acura mini-SUV, but we thank the BMW for its years of faithful service and wish it the best in its future endeavors.

And now, we’d like to present it with this plaque and a gift certificate to Jiffy Lube.

Yesterday as I was driving to Cincinnati my car passed 150,000 miles.  It is a milestone worth noting. 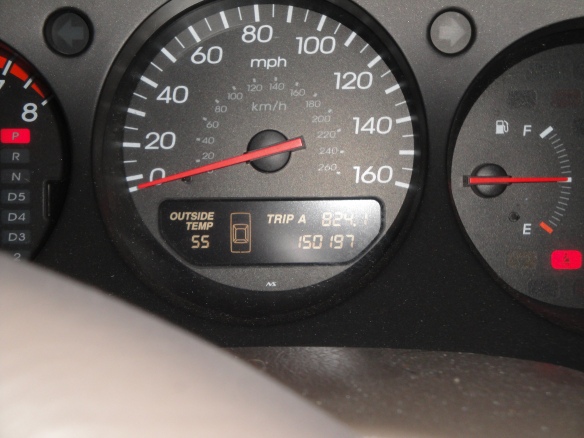 My car is a black 2003 Acura sedan, and its condition reflects the mileage.  After all, 150,000 miles is a bit more than 3.5 circumnavigations of the Earth.  The side doors are pitted and pockmarked, the inevitable result of countless dings suffered from parking in tightly packed garages.  The windshield has a chip or two, and the hood has uncomplainingly borne the indignity of innumerable bird droppings and scratches of unknown origin.  Yet still the car sits in the driveway — battered, yet triumphant and ready to serve, having survived to roll on and on where many of its fellow graduates of the class of 2003 have long since been consigned to the scrap heap.

The inside of the car feels as comfortable as an old shoe.  The seat and rear view mirror are positioned just where I want them.  I know every inch of the interior.  I love and trust this stalwart, dependable vehicle because I know it will faithfully take me where I need to go (and with pretty good gas mileage, too).  I want our mutual journey to continue.  My next goal is 238,857 miles, which is the average distance from the Earth to the Moon.

One of the most powerful memories I have of my childhood is riding in my dad’s 1988 Honda Accord. It was a mid-size four-door with a bronze exterior and tan upholstery, and it had a boxy design typical of cars from the 80s.

In retrospect it was a nice car, but everyone in the family, with the exception of my dad, regarded it as sort of a clunker. Its humble reputation probably resulted from it often being occupied by two male children who wreaked havoc inside. I once dropped a jelly sandwich on the emergency brake, and ever since then that area was really sticky. One time when we went to the zoo either I or my brother left crayons on an armrest, which melted over the course of the day, leaving permanent colorful waxy spots with little bits of Crayola wrappers sticking out.

Not all the destruction was our fault. Once, a mischievous friend of ours climbed on the roof and snapped the antenna off. The radio never played right after that. Also, our mother spilled milk in the backseat coming back from the grocery store, so it always smelled sort of bad.

I have fond memories of the car, though. It seems like I was only ever inside for two events: to go to the zoo or to go to work with my Dad on weekends. My Dad would always play a tape of Dark Side of the Moon by Pink Floyd. He says that this was the only tape I would bear to listen to, and, indeed, I remember liking that many of the songs bore a close resemblance to real-life things: “On the Run” of a man running; “Time” of the passage of time; and “Money” of money. This is the first memory I have of listening to music.

In his post on the Ford Grenada my dad mentioned that the velour upholstery heated up quickly on hot days. Maybe the Accord had velour upholstery too, because when we returned to the car after a day at the zoo and opened the doors, you could smell the heat inside. It was a dry, metallic smell that made even a hyperactive squirt like me realize we should air it out for a while before getting in.

The car gradually became less reliable and more of a joke. On the way to my first grade class, it stopped running and we had to push it a few yards. By the time I was in fourth grade it hardly worked at all. I recall a few weeks when my parents wouldn’t use it unless they had to. Finally there came a day when my dad called home to say that the car had broken down and he had steered it into the parking lot of a BBQ restaurant. We had to pick him up there. My parents sold the car almost immediately.

A few times in college I saw a 1988 Honda Accord parked around town that was the same color as my Dad’s. The first time I saw it I got excited and stopped to peer in the windows so I could see what the inside was like. My girlfriend thought I was acting stupid, but I was happy to see a 1988 Accord still chugging away.