If you’ve ever watched the TV show Bridezillas, you know that some people have a clear, overwhelming urge to make their nuptials “the perfect wedding.”  From the wedding dress to the bridesmaid’s gowns, from the rehearsal dinner to the wedding reception, from the flowers to the table decorations and countless other little details that some guests might not even notice, they have a clear mental image of what their wedding festivities should be, and they won’t settle for anything less than the ideal.

But what if your wedding reception ended up near the opposite end of the spectrum?

That’s pretty much what happened to an upstate New York couple at their wedding reception in the summer of 2015.  Things started to go south a little before 8 p.m., when the bride met one of the guests outside and found her incoherent and vomiting into a grocery bag.  The bride then saw one guest after another become violently, physically ill, and there weren’t enough bathrooms in the reception hall to meet the need.  Some unlucky guests weren’t able to make it to the bathrooms in time, while others began fainting.  Fire trucks and ambulances were summoned, tarps were laid down to allow guests to be triaged, and some guests needed to be given fluids intravenously to rehydrate them.

In all, at least 100 wedding guests became ill, and 22 had to be hospitalized.  The sickened guests turned out to have food poisoning in the form of a staph infection.  The not-quite-perfect wedding has now resulted in a lawsuit, with the bride and groom suing the caterer for the reception, seeking $12,000 in damages to pay the bills for the guests who were hospitalized.  The caterer denies that its food was the cause of the outbreak.

So the next time someone talks about wanting to have “the perfect wedding,” you might want to encourage them to go for a baseline that’s a little more reasonable — like having a vomit-free reception that doesn’t require guests to be hospitalized, for starters.

Yesterday we had just about the most hellish travel day imaginable. 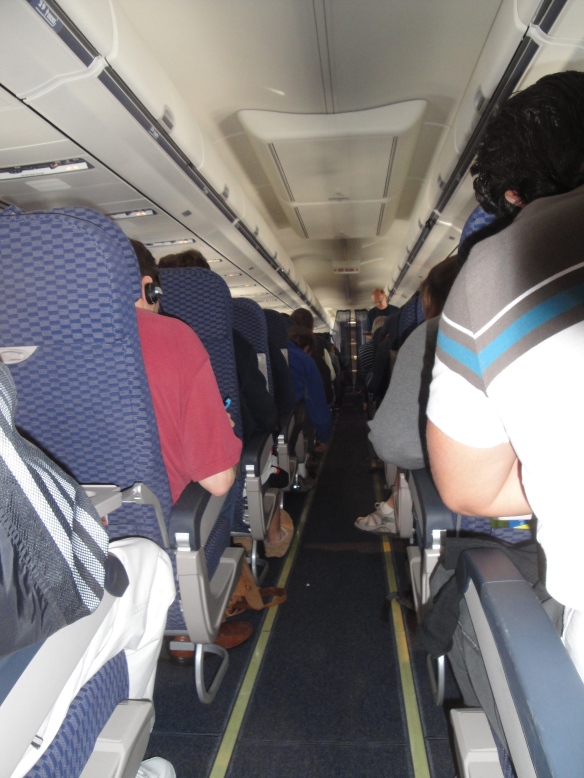 It began with Russell and me having food poisoning.  We’re not sure how we got it, but we both were feverish and sweaty, weak as kittens and sick as dogs.  I had been losing it from both ends and had vomited, with truly spectacular force, for the first time in as long as I can remember.  We then boarded a small van to take a five-hour drive to the airport.  Five hours! The combination of my unsettled stomach and the rutted Costa Rican roads, the many hairpin turns, and the tight shock absorbers in the van, which made every jut and jar a literal head-banging experience, had predictable results.  That five-hour ride was the longest and most unpleasant five hours of my life.

Once we reached the San Jose airport — and no airport was ever such a welcome sight! — the challenge then changed.  It is one thing to be barfing on a van, with only your family members and a hired driver as witness.  It is quite another to lose it in a crowded airport or on a plane packed with holiday travelers.  But through the trip from San Jose to Houston, the race to get through customs, and screening, and baggage claim, and re-entry in Houston, and then the final leg from Houston to Columbus, we held it together, and we finally got home around midnight, some fifteen hours after our hellish day began.

After that experience, being home sure feels good.