Regular readers of this blog will remember my brother UJ, who has posted occasionally about his adventures and travels. 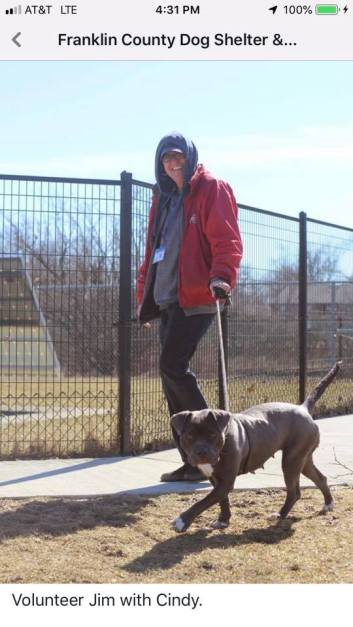 Lately UJ has been volunteering at the Franklin County Dog Shelter, where his principal activity is walking the dogs and, in the process, giving them a little bit of the human attention that dogs seem to instinctively crave.  Then, he posts about his exploits and the different dogs he has met on Facebook.

UJ had not previously indicated, from outward signs at least, that he was a big dog lover.  For example, I don’t think he’s ever had a dog of his own since he left our parents’ home, where we had a cantankerous “teacup dachshund” named George.  However, when one of his friends suggested the volunteer activity at the Shelter he gladly took it on, and it’s clear that UJ and the Franklin County shelter go together like hand and glove.  The Shelter has acknowledged UJ’s dedicated volunteer work with some posts of its own, like the photo to the right.

It’s interesting, too, that the focus of UJ’s Facebook posts has changed somewhat since he started his volunteer work.  After a few posts about what he was doing there, it really became all about the dogs he was walking and their desire to be adopted.  UJ will walk the dogs, take some pictures and video, and then post something about the dogs and how good-natured and easygoing they were.  And, UJ and his Facebook posts publicizing the dogs he’s walking have helped the dogs at the Shelter who are up for adoption find homes — including homes with some of UJ’s Facebook pals.

I’ve been a critic of social media, and I still think it has contributed mightily to our current polarized political situation.  But UJ’s efforts at the Franklin County Dog Shelter show how a little volunteer work and some social media attention can really have a positive impact.  I’m proud of UJ’s good work, and I think his use of Facebook to help orphan dogs find a human family illustrates what is the right role for social media in civic affairs — to let people know about what’s happening in their communities, and how they personally can make a difference.  Kudos to UJ!