Yesterday Kish and I went to screen Bohemian Rhapsody, which tells the story of Freddie Mercury and Queen.  Biopics about rock stars have become something of a genre unto themselves these days — according to the previews yesterday, there’s another one coming out soon about Elton John, by the way — and Bohemian Rhapsody is a worthy addition to the playlist. 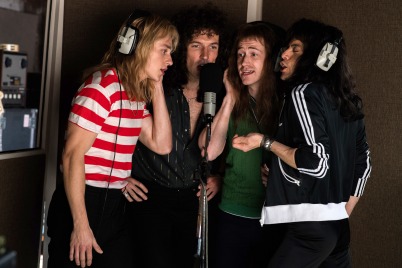 The film begins as Mercury and Queen prepare to perform at the Live Aid concert, then takes us back to the group’s earliest roots.  We meet Farrokh Bulsara, a buck-toothed baggage handler at a British airport who dreams of doing something bigger.  He finds a struggling band called Smile playing in pubs, and when the group loses its lead singer, Queen’s journey begins and Farrokh becomes Freddie Mercury.  The film traces the artistic arc of the group, which became one of the most inventive, boundary-breaking bands of the ’70s — as the song that gives the film its name attests — and the band steadily moves from playing small towns to filling some of the largest stadiums in the world, with the flamboyant Mercury leading the way.

As the band’s story is told we get glimpses into Freddie Mercury’s personal life, from his frosty relationship with his Indian parents and their Zoroastrian faith, to his long-term bond with a woman he called the love of his life, to his embrace of his gay lifestyle and ultimately to his discovery that he had AIDS at a time when that diagnosis was viewed as a death sentence.  And, as always seems to be the case with rock star biopics, enormous success and fame have their price, and we see Mercury dealing with drugs and alcohol, leaving the band that was like a family to him, and supporting the creeps and hangers-on who always seem to find a way to latch on to the successful creative minds and sap them of their unique energy.  But Mercury breaks the downward spiral, sheds the leeches, and reunites with the group just in time for a triumphant performance at the Live Aid concert.

Bohemian Rhapsody has been criticized for glossing over some aspects of Mercury’s life, especially his sexuality, but the film is telling a wide-ranging story that simply doesn’t allow it to delve deeply into every relationship — whether it be Mercury’s relationships with fellow bandmates or his relationships with his lovers.  The result is a film that increased my appreciation of Queen and the dazzling personality who was one of its principal creative forces.  And Rami Malek is himself brilliant as the brilliant Freddie Mercury.

Why are there so many rock star biopics?  I think it’s because the music world is home to a lot of very interesting stories that are well worth telling.  The story of Freddie Mercury and Queen is one of those stories, and Bohemian Rhapsody tells it well.

Earlier this week the policy that prohibited any homosexual or bisexual person from disclosing his or her sexual orientation or from speaking about current relationships including their marriage while serving in the military was eliminated.

In 2010 with the support of President Obama, Defense Secretary Robert Gates and Joint Chiefs Chairman Mike Mullen a Defense Authorization Bill which would have removed this restrictive policy was approved by the House of Representatives, but was stopped in the Senate with a successful filibuster led by Senator McCain.

I’m hopeful that a few years from now people will look back at policies like DADT and say this is not the kind of thing that represents America. Unfortunately there will be those that disagree, but this is the kind of change I voted for that I wouldn’t have gotten from John McCain.