Tonight the NBA Finals begin.  For the fourth straight year, the Cleveland Cavaliers will face off against the Golden State Warriors.

If you listen to the pundits, this will be the most uncompetitive, lopsided contest in recent sports history.   You’ll see headlines like “Everybody is counting out LeBron James, Cavs in NBA Finals Again” or “Is Warriors-Cavs IV the biggest mismatch in modern Finals history?”  You’ll read about how the mighty Warriors, with their entire roster filled with All-Star studs like Steph Curry, Kevin Durant, Klay Thompson and Draymond Green, are going to mop the floor with the poor Cavs, who can offer only LeBron James and a gang of unknowns and retreads.  You’ll see statistical analysis of why the Warriors are destined to win, and hear about how the Cavs are in the Finals only because the Eastern Conference of the NBA is like the minor leagues compared to the Western Conference, and see that the Las Vegas oddsmakers have made the Warriors a prohibitive favorite and set a double-digit point spread for the first game. 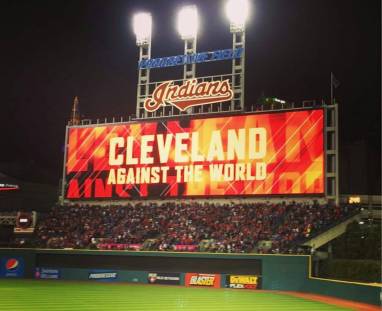 The only way puzzled commentators think the Cavs might even win a game or two is if the entire Warriors team comes down with the flu, or Draymond Green and a few of his teammates get suspended for multiple games after a crotch-targeting binge that can’t plausibly be viewed as involving “basketball moves.”

Is this the biggest mismatch in sports — say, since the mighty Miami Hurricanes were supposed to wipe the field with the Ohio State Buckeyes in the National Championship game on January 3, 2013?  I guess we’ll just have to see if the know-it-all commentators and talking heads could possibly be wrong, and the Cavs can luck out and scratch out even a single win against the media darlings — which would no doubt happen only with the help of the officials and an overconfident Warriors team that doesn’t bring its “A” game against a feeble opponent.

Sometimes, in sports, the underdog does win, and the conventional wisdom proves to be wrong.  Will it happen this time?  I’ll be watching to find out.  But if the impossible does occur, and David does manage to slay Goliath in 2018, it will be one of the sweetest wins in the history of sports.  Because this time, it truly is Cleveland against the World.

Tonight the Cleveland Cavaliers square off against the Golden State Warriors in the NBA championship finals.  It’s the first time in NBA history that two teams have played each other for the championship three years in a row, and the ledger stands at 1-1 — with Golden State winning the first year, when two of the three Cleveland stars were out with injuries, and the Cavaliers memorably winning in seven games last year, as LeBron James, Kyrie Irving, Kevin Love and their teammates brought the first championship trophy to Cleveland since 1964.

There are more story lines to this series than you can count.  There’s the tiebreaker angle, of course, and the fact that the lineups of the two teams are more studded with NBA All-Stars than any two prior teams that have met in the finals.  There’s the fact that Golden State hasn’t lost a game this post-season, going a perfect 12-0, and are pretty much invincible when Steph Curry, Klay Thompson, Draymond Green, and Kevin Durant are on the floor.  (Cleveland, on the other hand, has lost only one game in its march to the championship series.)  There’s the fact that the gifted Durant joined the Warriors specifically to try to win an NBA championship, and now he gets his chance.  And there’s the weird, post-“off the schneid” vibe of a Cleveland team playing for a championship without the weight of 52 years of futility, bad luck, and bad karma hanging on their shoulders.  A Cleveland team, playing as defending champions?  Who’da thunk it?

The overwhelming consensus seems to be that the Warriors will win handily, just as they’ve done in virtually every other game this season.  In fact, some people are betting that the Warriors will end this post-season 16-0, which has never been done before.  That conventional wisdom is not surprising, because in the last three seasons Golden State has won more regular season games than any team ever has, even though they are playing in the much tougher Western Conference — so they logically should be the favorite.   Of course, the same arguments were made last year, when the Warriors were of course without Durant, and the Cavs ended up winning anyway.

I don’t pretend to have any great insight into how tonight’s game will go, but I’ll be watching for one thing:  can the Cavs keep the game close?  The Warriors blow out so many teams, you just wonder how they will react if the game comes down to the wire and they’re thinking their home-court advantage might be on the line.  I’ll also be interested in seeing what kind of impact Cleveland’s other key contributors — players like Tristan Thompson, J.R. Smith, Iman Shumpert, Kyle Korver, and Channing Frye — have in this game.  If the Cavs hope to win, they need a significant contribution beyond just the James/Irving/Love trio.

Two other points:  First, the NBA playoffs seem to take forever, and there are long layoffs between series, so let’s hope the two teams are not too rusty.  Second, why does the game have to start at 9 p.m. Eastern?  I know it’s out on the west coast, but can’t the NBA have a little regard for the working stiffs among us who’ll need to get up tomorrow morning and get off to work?