Here’s an example of a really bad interview.

The sports editor of the Grand Valley State University student newspaper was doing an interview with the football team’s new offensive coordinator and asked the coach to name three non-football historical figures he’d like to have dinner with.  According to news reports, the coach responded as follows: 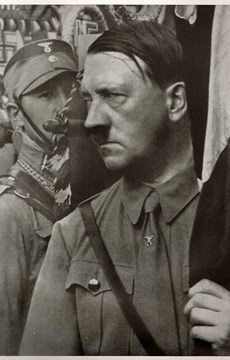 “This is probably not going to get a good review, but I’m going to say Adolf Hitler.  It was obviously very sad and he had bad motives, but the way he was able to lead was second-to-none. How he rallied a group and a following, I want to know how he did that. Bad intentions of course, but you can’t deny he wasn’t a great leader.”

Of course, Hitler directed the genocidal murder of millions of Jews and was the direct cause of a worldwide war that killed additional millions and left his country a crushed and ruined shell, and his brutal and repressive regime has left an indelible moral stain on the German people.  That’s not what most people would view as the record of a great leader, but the legacy of a seriously disturbed psychopath.  Not surprisingly, Grand Valley State University promptly suspended the coach, and he then resigned.  In a statement posted on social media, he said:  “In a poor effort to give an outside-the-box answer to a question, I mistakenly communicated something absurd,” and added: “There is no justifiable excuse — it was insensitive and not my intent.”

So what in the world was he thinking?