The new Star Wars is out in the theaters.  The commercials for Star Wars:  The Rise of Skywalker have been running for a while now, and the expected Star Wars movie hype machine is in full swing.  In one article, for example, a former Disney executive reports that George Lucas, the creator of Star Wars, felt “betrayed” by the studio’s plans for the last trilogy in Lucas’ contemplated nine-part opus, and fans and critics are already emotionally debating whether this latest film is a disaster or is helping to get the Star Wars franchise back on its footing. 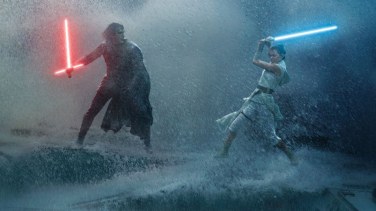 All of this, I think, is part of the fundamental problem with Star Wars.  It’s clearly a “franchise,” and it feels like a “franchise.”  When the first Star Wars came out 40 years ago it was fresh and new and funny and interesting and ground-breaking in its use of special effects.  Now the Star Wars model is old and tired.  When was the last time somebody had a good laugh, or even a chuckle, at a Star Wars film?  I’m guessing it probably coincides with the last time Harrison Ford was on the screen.  And when you’ve got obsessive fans debating every instant of a film for consistency with what has gone before and comparing it to the eight prior episodes, you’re never going to achieve “fresh” and “fun” status.  Every successive film is weighted down, more and more, by the ponderousness of the Force and the Jedi and the Sith and the increasingly confusing plot lines and story arcs.  How can anybody be expected to keep it all straight?

I’ll go see this newest Star Wars film because I’ve seen the prior eight and I suppose I need to, to close the book on what once was great.  But I’m hoping that this latest Star Wars is the last Star Wars.  Really.  It’s time.

It’s beginning to look a lot like Christmas — but who cares?  I mean, come on!  We’re less than two weeks away from the opening of Star Wars: The Force Awakens, and the geek world is in full Star Wars madness mode.

You could spend hours just surfing the internet for information about the new movie.  To save you at least part of the trouble, here’s a sampling of some of the diverse Star Wars stories out there:  an interesting BBC interview with Harrison Ford and director J.J. Abrams, a story collecting seven of the most far-out fan theories about the plot lines of the movie (Jar Jar Binks a Sith Lord?  Seriously??), and an article positing that a careful review of the Star Wars trading cards that are now being sold reveal crucial story elements.  And, of course, you can go to the official website if you want to watch the trailers a few dozen more times to get ready for the big day.

I’m not much for trying to figure things out before I go to see a much-anticipated movie, so I’m not going to actually read any spoiler reveals or try to guess what might happen to Han, Luke, Leia, and the new generation of Jedi warriors.  I’d rather take my Star Wars pure and unadulterated by anything other than approved previews.  So for now, I’ll count the days until the movie hits the theaters, check out safe stuff like the Spanish language poster printed above, and think:  that movie looks like it is going to be pretty cool.

Harrison Ford is 71 years old.  In June, his ankle was broken by a door on the Millennium Falcon, Han Solo’s ship.

There’s some bittersweet humor in Ford’s injury, because in the original Star Wars trilogy the Millennium Falcon was viewed by everyone except Han Solo as a piece of intergalactic junk.  There was always a question about whether the light drive or the shields would work, and Solo and Chewbacca and R2D2 spent hours working on the ship and trying to tie down some loose circuit or faulty system.  The fact that a malfunctioning door in the Millennium Falcon broke the ankle of the actor who plays Han Solo therefore is ironic indeed.

But here’s the thing:  Ford is back on the set after only two months, and filming has resumed.  Ford was recently seen on the red carpet at some event and was walking without a limp or any assistance.

Speaking as a 50-something guy who is still somewhat gimpy after toe surgery six months ago, I’m stunned at what Ford has done.  For a 71-year-old guy to bounce back so quickly from a broken ankle is nothing short of amazing.  It just shows why Harrison Ford was the perfect Han Solo — and also the perfect Indiana Jones, for that matter.

The new Star Wars movie, featuring all three of the actors who created the iconic characters of Han Solo, Princess Leia, and Luke Skywalker, is set for release on December 18, 2015.  Mark your calendars!

When we last saw Luke Skywalker, Han Solo, and Princess Leia, they were on a forest moon, celebrating the death of the Emperor and the downfall of the Empire, surrounded by happy Ewoks and the ghosts of Yoda, Darth Vader, and Obi Wan Kenobi.

Next year, they’ll be back.  The new installment of Star Wars begins filming in a few weeks, and all of the original cast members, including Harrison Ford, Carrie Fisher and Mark Hamill, as well as the actors who played Chewbacca, R2D2 and C3PO, will be back.  They’ll be joined by some new folks as well as the actor who plays the distasteful boyfriend character on Girls, who apparently will be a villain.  Obviously, the story will take place years after the end of Return of the Jedi.

When George Lucas decided to make The Phantom Menace, he was taking a risk in reinvigorating a beloved and colossally popular movie franchise — but the risk involved in reintroducing the familiar characters from the original Star Wars movies in this latest feature is even greater.  What has happened to Han and Leia?  Did they get married and have kids, or did something happen to keep them apart?  Do any of the characters die?  Whatever happens, people will be second-guessing the story, and the fact that this new film won’t be directed by George Lucas is just going to increase the scrutiny.

I loved the original Star Wars films and fondly remember watching the first movie at the old University Flick theatre next to the Ohio State campus and then going back to see it again and again.  I’m looking forward to being reintroduced to some of the most iconic movie characters of all time, but I’m warning new director J.J. Abrams — handle with care.