From time to time here in Columbus we’ll get an “amber alert” to our smartphones asking us to be on the lookout for a particular car, or a “serious weather alert” notifying us that tornadoes have been spotted in the surrounding area. 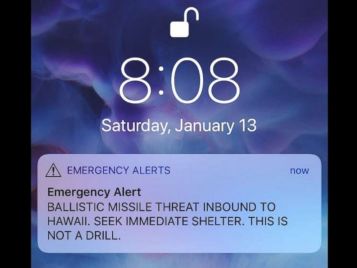 Imagine feeling a vibration, looking at your phone, and seeing an alert like this:  “Emergency Alert.  BALLISTIC MISSILE THREAT INBOUND TO HAWAII.  SEEK IMMEDIATE SHELTER.  THIS IS NOT A DRILL.”

Hawaii residents received that very message on their phones yesterday morning, producing about 30 minutes of terror, panic, and mass confusion until emergency officials notified everyone that the alert was a mistake.  Hawaii officials went to social media to notify people of the error after about 15 minutes, and eventually put up messages on highway road signs to let people know about the mistake, but it took 38 minutes for the officials to send a follow-up text to the people who received the first alert to advise them that missiles weren’t going to be raining down on the islands.

How did such a colossal blunder happen?  Hawaii officials say that, during a drill, one person pushed the wrong button.  Several months ago the state emergency management agency instituted a program to periodically test a program to alert Hawaii residents to a possible attack from North Korea, and the false alarm message apparently went out to the public during a “shift change.”  Hawaii now says that, when it is doing future drills, it will have two employees involved rather than just one.  (Hey, Hawaii — why not make it three employees, just to be on the safe side?) 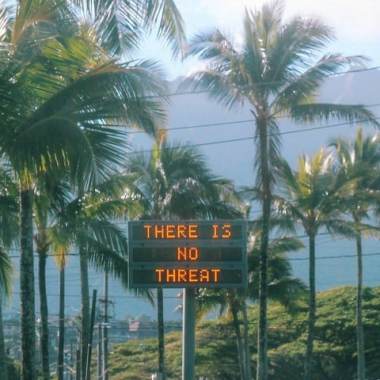 It’s one of those bizarre, hard-to-believe stories about our governmental institutions that leave you shaking your head and wondering if we’re being told the whole story.  So, before yesterday, Hawaii left it up to one person to decide whether to send a message to everyone in the state about an impending nuclear missile attack, and there was no “fail safe” element built into the program to make absolutely certain that the right message went out?  And how would a “shift change” contribute to the mistake?  Could it really be that one employee of the Hawaiian emergency management agency would leave in the midst of a drill because his/her shift ended, and leave it up to the incoming employee to figure out which message to send?  Could employees of an emergency management agency, of all places, really have that kind of clock-in, clock-out mentality?

It’s no wonder that X-Files-like conspiracy theories immediately surfaced, with some people contending that there actually was a missile attack that was successfully thwarted, and the government just didn’t wanted people to know about it, and others claiming that the state’s emergency management system must have been hacked.

I feel sorry for the people of Hawaii who enduring long minutes of panic and worry that they were facing imminent obliteration.  Obviously, we deserve better from our governmental officials — but the Hawaii issue makes you wonder how many other states have similarly ill-considered, poorly staffed programs that might send false alarms out to unsuspecting citizens.

At the time, some critics argued that the decisions of states with Republican governors to refrain from building their own websites was politically motivated.  In retrospect, however, the decisions to eschew developing state-specific health care exchanges seem more like a wise recognition of the limitations of state capabilities, because the experiences of states that did attempt their own websites have been decidedly mixed.

Six of the 14 states that chose to create their own exchanges — Masschusetts, Oregon, Nevada, Maryland, Minnesota, and Hawaii — have had severe functionality problems and have become tremendous cash drains and political albatrosses.  In Massachusetts, Oregon, Nevada, and Maryland alone, the federal government has paid at least $474 million to support the establishment of non-functional exchanges, and that cost total seems certain to increase significantly.  In those states, Democratic politicians are blaming the website contractors and threatening litigation, and Republicans are saying that the states never should have attempted to build the exchanges in the first place.

Obamacare has become such a political football that every fact and development gets spun to death — but if we can’t learn from the current reality, and recognize that mistakes were made in the legislation and its conception, then we are just compounding our problems.  In all, the Kaiser Family Foundation estimates that about $5 billion in federal funds that have been shelled out to states to allow them to assess whether to create state-specific exchanges and then, in some cases, to support their creation.  That’s an enormous sum of money, and it is becoming clear that a significant part of it has been wasted.  Whatever happens with Obamacare, let’s at least hope that in the future we refrain from enacting statutes that require states to develop large-scale, complicated technological systems, on their own, with the federal government picking up the tab.  As the mounting Obamacare costs demonstrate, that approach is fraught with peril.

Brown snakes are overrunning Guam.  They came to the island aboard U.S. ships after World War II.  Now they are multiplying like crazy, have killed off virtually every native species of bird, and are biting humans and wrecking power lines.  As a result, Guam’s jungle areas are coated with spider webs, because the birds that normally would eat the spiders aren’t there to keep the spiders in check.

Guam’s snake infestation is giving Hawaii the heebie-jeebies.  If a pregnant brown snake, or a mating pair of snakes, hitched a ride on a boat and landed in the snakeless Hawaiian Islands, Hawaii’s beautiful bird population — which has no fear of snakes — could be decimated.

Guam officials are concerned that the brown snake problem could hurt Guam’s reputation as a tourist destination.  No kidding!  Guam sounds like a nightmare.  If your small island is infested with biting snakes and spiders, you’ve already managed to creep out the vast majority of humans.  All Guam needs to do to complete the hair-raising, creepy-crawlie trifecta is to throw some scorpions into the mix.

The U.S. government has come up with a drastic solution to Guam’s brown snake problem.  It will drop dead mice laced with painkillers over the island’s jungles.  The theory is that the brown snakes will eat the mice and die by the score.   Presumably, the government has some reason to believe that other mice-eating creatures won’t gobble down the tainted mice.

I’m not so sure — and I therefore composed this bit of doggerel:

Brown snakes hitched a ride to Guam, hoping to find some lebensraum

They bred and grew to levels absurd, ’til little Guam had not a bird

And as the bird population ebbed, the isle became more spider-webbed

So, cats of Guam!  Good cats, beware!  Toxic mice are in the air! 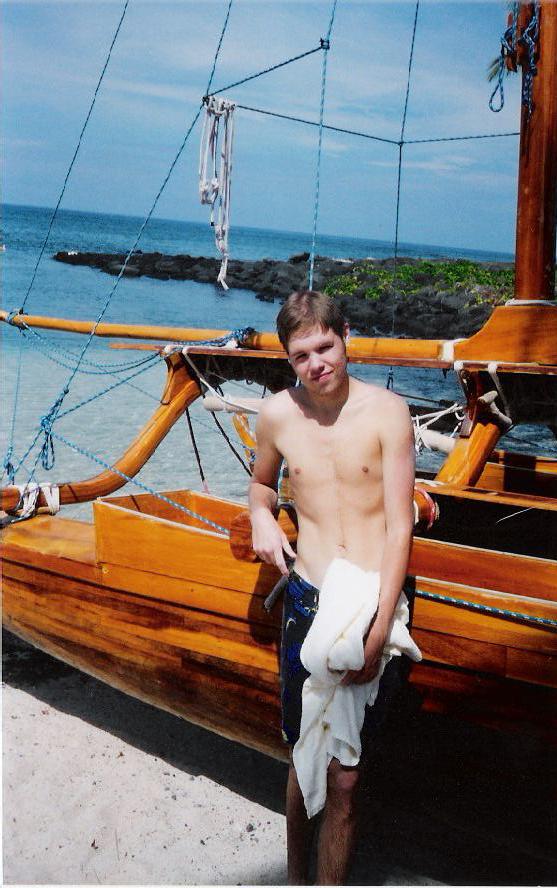 On The Big Island

On this gray Friday morning, when the weather is supposed to turn cold again and rain splatters against the window, I thought we could all use a beach photo to lift our spirits. This is a picture of Richard from our trip to Hawaii during his senior year at CA.