When Kish and I saw that Jimmy Carter had another book out, we wondered aloud whether he possibly could have anything new to say.  Today I stumbled across this article, which notes that the former President has written 25 books — 25! — and urges him to please, please stop. 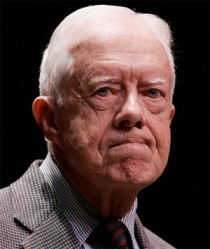 The linked article treats the former President as a joke, which is sad.  I think, rather, that President Carter comes across as a desperately needy and therefore somewhat pathetic figure.  His ego seemingly cannot accept that, 30 years ago, he was voted out of office after one term and is generally regarded as a failed President.  Since his defeat, President Carter has worked feverishly to try to stay in the public eye and somehow resurrect his reputation, even if it means churning out dozens of books that no one reads or even cares much about.  Recently he even made the weird, and ultimately pitiful, claim that his work since he left office was somehow “superior” to that of other ex-Presidents.  All of these activities are unfortunately reminiscent of Richard Nixon’s hopeless and doomed campaign to overcome the disgrace of Watergate by writing “serious” books about foreign affairs and foreign leaders.

It would be better for Mr. Carter if he put down his pen, stopped injecting himself into world affairs, and simply accepted that history inevitably will judge him solely on the basis of his presidency.  He can’t change the verdict of future historians.  But by ceasing his hyperactive attempts to do so, President Carter could retain the remaining shreds of his dignity and self-respect, and that counts for something.