Recently I drove out to Marysville, Ohio to attend a farewell celebration for a Honda employee who was moving on to a new position with the City of Columbus.  The event was held at the Honda Heritage Center, a new building in the Honda complex of buildings that have sprung up in western Ohio since Honda built its first factory more than 30 years ago. 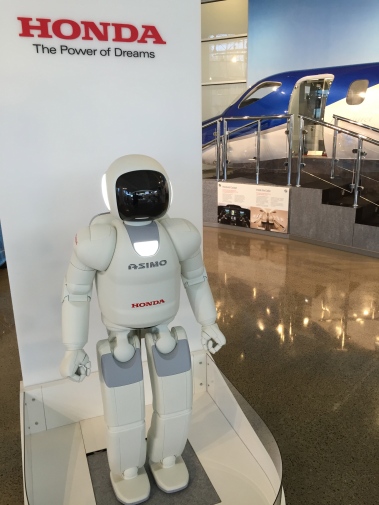 While I was at the Heritage Center I visited a little Honda museum that is located in the building.  It’s a neat feature, and provides the opportunity for car buffs like me to take a nice trip down memory lane.  I got to see the very cool, sleek-looking Asimo in person — or should that be, in robot — gape at the Honda race cars, and check out some of Honda’s other manufactured products.  For me, though, the highlight was the vintage cars that are displayed there, in pristine condition.  They included the very first Honda car that I ever remember seeing on American streets:  the Honda Civic, circa the early ’70s, which is pictured below.

Honda has been an important part of Ohio for a long time now.  It employs huge numbers of Ohioans — all clad in the trademark Honda white uniform — in good-paying jobs, emphasizes quality and teamwork, and continues to build lots of excellent vehicles. Last year, Honda North America reached a new record:  1,862,491 Honda and Acura vehicles.  And for those who emphasize made in America values — which always seems to be someone’s theme during election years — it should be noted that Honda reports that its eight auto plants in North America produced more than 99 percent of the Honda and Acura cars and light trucks sold in the U.S. in 2015.

Honda has been a great corporate citizen ever since it first came to Ohio.  I’m glad it is using the Honda Heritage Center to celebrate its past, its present, and its future.