Earlier this month, the Hollywood Casino opened on the outskirts of Columbus.  About 25,000 gamblers showed up for the opening day festivities. 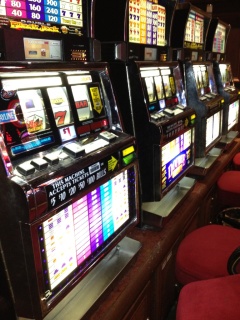 In 2009, Ohio voters approved a constitutional amendment authorizing the construction of four casinos — one each in Cleveland, Toledo, Columbus, and Cincinnati.  When the constitutional amendment was considered in 2009, state officials estimated that the 33 percent tax on gross casino revenues from the four casinos, plus approved video lottery terminals, would produce $470 million annually in tax revenue.  The promise of that kind of tax contribution, plus the jobs the casinos would create, caused Ohio voters to end their long-standing opposition to casino gambling in the state.

The Columbus casino is the third to open, following casinos in Cleveland and Toledo.  It’s early yet, but the trend lines in Cleveland and Toledo aren’t knocking anyone’s socks off.  For both of those casinos, June was the first full month of operation — and also was the high point for revenue, which has declined every month since June.  In Cleveland, revenue has declined from $26.1 million in June to $21.1 million in September; in Toledo, revenue has dropped from $20.4 million in June to $15.9 million in September.  The casino operators and experts say that the novelty of a new casino wears off and it takes a while for standard gambling patterns to get settled, and that the Ohio casinos might not follow the patterns seen in other locations.  The casinos also are tweaking their operations as they learn their markets; in Cleveland, for example, the Horseshoe Casino is now formally welcoming bus tours and providing some slots credits to entice bus visitors.

A few months won’t tell the tale, of course, but you have to wonder if we’ve reached the casino saturation point in this country, and there just isn’t that large of a market for more casino gambling.

On Monday Cleveland’s Horseshoe Casino opens.  It will be the first to open of the four casinos Ohio voters authorized when they passed a constitutional amendment several years ago. 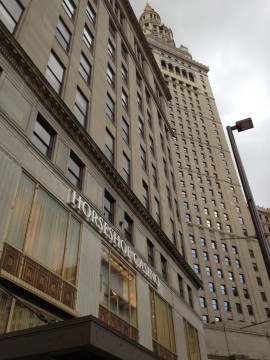 The casino, which is located in the heart of downtown, right on Public Square, next to Cleveland’s landmark Terminal Tower, has been the focus of significant hope and concern.  The hope is that the casino will kick start the struggling downtown economy by bringing jobs, foot traffic, and tourist dollars to local restaurants and businesses.   In some ways the casino has already delivered on some of the hope; it is housed in a vacant space formerly occupied by a closed department store that had to be refurbished, and it has hired workers to deal cards, serve drinks, and do the other things that casino workers do.

The concern is that the Public Square location might not show Cleveland off to the greatest advantage.  It is an extensive open area that is frequented by vagrants and panhandlers; it’s also the place where RTA riders board buses and vice versa.  Clevelanders fear that casino visitors who see homeless people in the surrounding area might not venture out to explore the rest of downtown Cleveland — and the hoped-for broader economic impact won’t materialize as a result.  In an effort to spiff up the area, Cleveland police have increased their patrols and worked to roust vagrants from the area.

The big question with casinos as an engine of economic activity is whether visitors will leave the casino grounds and check out the rest of the area.  If casino patrons don’t feel secure enough to do so, they’ll just stay in the casino, punching buttons on their slot machine of choice and eating and drinking the casino’s fare.  The challenge for Cleveland is to do what it can to prevent that from happening.