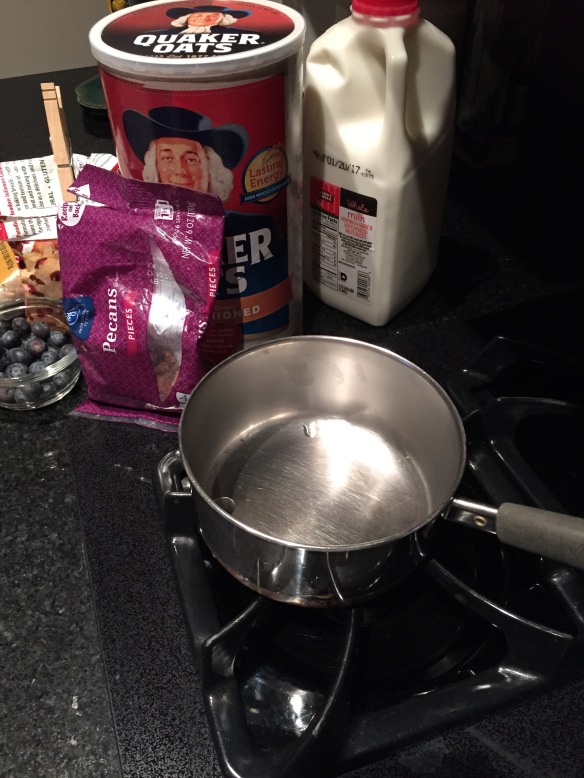 As I was on this morning’s walk, inwardly grumbling about the 10 degree temperature with face stiff from the brutal chill, I heard my mother’s voice.  “On a cold morning, nothing is better for you than hot cereal,” she said.

It’s true.  Mom was right up there with the Quaker Oats guy in advocating for hot cereal as a crucial part of the cold weather diet.  Every year, at some point around Halloween and responding to some innate motherly weather instinct that was beyond the ken of little kids, she would declare that the hot cereal season had begun.  In explaining why, she would use phrases like “fortified against the cold” and “stick to your ribs” — but in any case her declaration had the force of law.  From then on the Webner kids ate nothing but oatmeal, Cream of Wheat, Maypo, Malt o’ Meal, and Coco Wheats until, months later, the winter weather finally broke and Frosted Flakes would once again appear on the kitchen countertop.

They say a boy should always listen to his Mom, and I’d hate to be a disobedient son, so today I’m making some oatmeal with blueberries, brown sugar, and pecans for breakfast.  And because I’m now a grown up, a cup of steaming hot coffee and some orange juice sound good, too.

In the Webner household during the 1960s, there was a hard and fast breakfast rule:  during the winter months, you ate hot cereal, period.  No Frosted Flakes or Quake!  No sir, winter was for Malt O Meal, Cream of Wheat, Coco Wheat, Maypo, and particularly Quaker Oats.

On a cold day like today, my mother was a firm believer in the views expressed by this vintage Quaker Oats commercial (which aired in the days of the original, vastly superior Darren on Bewitched).  If it was cold outside, you needed to have something hot and gooey in your stomach when you started your day.

By the end of March, we Webner kids were sick of hot cereal and counting down the days when we could start our morning with something cold and sugary.