Every day, those of us in the Midwest read stories about awful conditions in Staten Island and other parts of New York and New Jersey — people without power, without gas, without food, without help, and without hope, a week after Sandy the Superstorm made landfall — and we shudder.

The media is eager to label politicians as winners or losers in all of this.  They ask:  Did President Obama do a great job in the first 24 hours, or has he fallen down on the job recently, when he left the East Coast for the campaign trail?  Was New York City Mayor Bloomberg crazy to even consider holding the New York City Marathon under these circumstances?  And will FEMA ever perform flawlessly when a hurricane scores a near-direct hit on a major city?

It’s ludicrous to try to identify political winners and losers when disaster strikes; it just cheapens the colossal human tragedy to view it solely from a political perspective.  The conditions left in the wake of Hurricane Sandy are unimaginable to those of us who are accustomed to modern life — a group that includes all of the wretched souls in New York and New Jersey who have had their lives turned upside down.  Imagine living in a small apartment in one of the affected communities, having to deal with overflowing toilet bowls, spoiled food in the refrigerator, rotting trash at the curbside, no food or water, unheated rooms in near-freezing temperatures, and fears of armed looters when darkness falls.  The victims of Hurricane Sandy can’t understand why, a week later, they aren’t being helped to get their lives back to normal, and I expect they find it infuriating that the media has passed judgment on which politician performed well and which didn’t, and then moved on to another story.

If there is a lesson about this, it is that natural disasters are, in fact, disasters — incidents that have catastrophic consequences that can’t be easily reversed or repaired.   Mayors, Governors, and Presidents do the best they can, but often the scale of the disaster makes appalling human suffering unavoidable.  We should just accept that fact, let the governmental bodies do their job under difficult circumstances, try to help however we can, and not be quite so quick to judge. 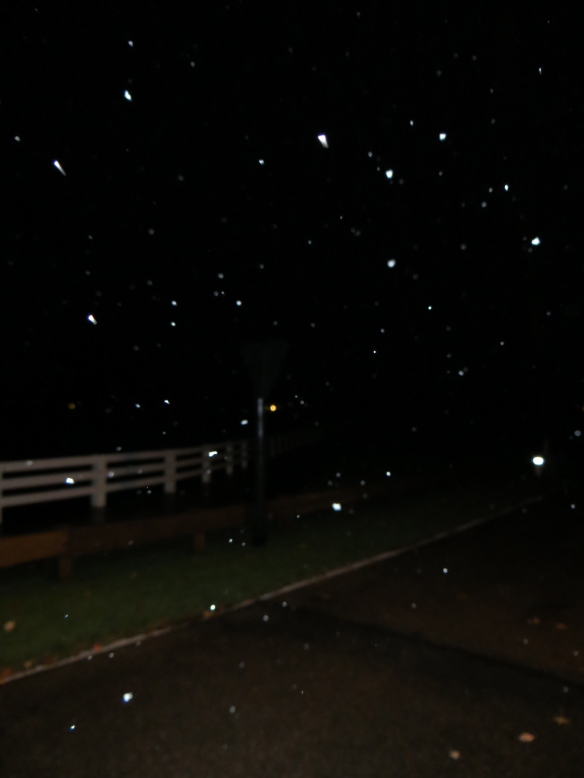 Not content with flooding lower Manhattan and wreaking havoc up and down the eastern seaboard, Hurricane Sandy’s wet arms have now reached New Albany, combined with a northern cold front, and brought high winds and our first snowfall of the season.  On the day before Beggar’s Night, it is a cruel trick, indeed.

These days, we seem to see everything through the lens of the presidential election — even a potentially catastrophic storm like Hurricane Sandy.

Rather than focusing on the storm and its potential human cost, much of the media buzz today seemed to be  about how the storm would affect the campaign.  Would Sandy interrupt Mitt Romney’s apparent momentum?  Would it allow the President to be “presidential” and therefore give him an advantage?  Would Mitt Romney continue to campaign and risk a backlash from disgusted voters?   Would the storm delay the release of economic figures on Friday, or be used as an excuse to delay the release?  Could the disruption caused the storm and potential power outages affect early voting, or cause the President order some kind of delay of Election Day?

In this instance, the politicians showed better sense than the nattering talking heads.  President Obama — who is our current President, after all — canceled his campaign appearances and focused on doing his job in connection with the hurricane and disaster preparedness.  Mitt Romney canceled his campaign appearances, suspended fundraising activities in the affected areas, asked supporters to help victims of the storm, and turned his campaign offices in New Hampshire, Pennsylvania, North Carolina, and Virginia into centers for collection of relief supplies.  The candidates and their campaigns, at least, recognize that there are more important things than squeezing in a few more campaign appearances when a dangerous storm is hurting some of our fellow Americans.

It makes you that maybe there’s some hope that our political leaders, ultimately, have their priorities straight, even if the news media doesn’t.

Here comes Hurricane Sandy, the tropical storm that is scaring the pants off everyone from the east coast to the Mississippi.

Sandy is still far to the south, but speculation about the disasters it might inflict makes for juicy headlines.  It could be a “Frankenstorm” that might pile water up against Manhattan Island, swamping low-lying areas and flooding subways tunnels.  It could wipe out hundreds of miles of beachfront through massive storm surges.  It might combine with a cold front and then drop huge amounts of heavy, wet snow up and down the heavily populated eastern seaboard, snapping rotted old trees like matchsticks, downing thousands of miles of power lines, and leaving the most densely populated part of the nation without power for days.  Under the right circumstances, the storm could paralyze multiple states and municipalities just as Election Day arrives, throwing the nation into chaos.

The dire warnings of forecasters whip us into full panic mode before cautioning us all to stay calm.  But we know what they’re really telling us.  It’s a zombie apocalypse!  Old Testament stuff!  Dogs and cats, living together!  Mass hysteria!

Hey Russell, get your flashlight ready!  Soon Brooklyn could be underwater, and the veneer of civilization may well be ripped away from the citizens of New York City, leaving marooned residents to battle savagely for the last scraps of dirty water hot dogs.  Or not.