I miss SkyMall, the curious catalog that used to be found in the pocket on the backside of every airplane seat along with the airline’s in-flight magazine.  SkyMall vanished from the seat back pockets some years ago, when the company that published it went into bankruptcy. 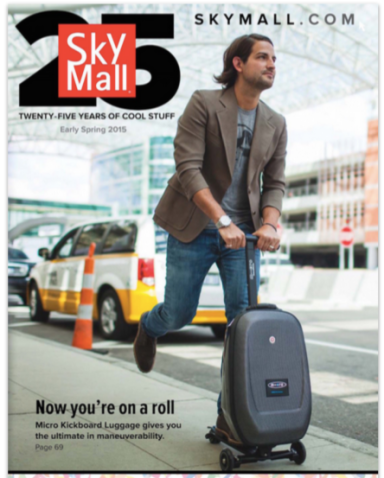 I liked SkyMall, because it was the perfect reading material for the beginning or end of any airline flight, when all of your stuff is “stowed” in the area below the seat in front of you and you’re just killing time until the flight finally takes off or lands.  You could pick up that magazine, flip to just about any page, and find some bizarro product that made you wonder whether any real human being actually owned this stuff — and, if so, how much money they must have to use some of it to purchase things that could only be considered as complete luxury items for the idle rich.  You would look at the strange products and marvel about what it would be like to have enough money to actually purchase one of them.  Before you knew it, the plane was taking off or landing and you could return the SkyMall to the pocket and get back to your actual life.

The products offered in Sky Mall always raised a lot of compelling questions.  An enormous, telescoping plastic device that would vacuum up spiders from your cathedral ceiling?  (How often would you ever need to use it, and where would it be stored?  Is there some part of the country where ceiling spiders are a serious problem?)  An expensive Harry Potter replica wand?  (Was it intended for a child, who might break it or lose it, as children often do, or for a nerdy adult who liked the Harry Potter books?  How would you react if you went into someone’s den or office and saw such a wand prominently displayed?)  A sizeable Yeti statue for the garden?  (Who would want a statue of Bigfoot for their garden?  A gnome or a fairy, perhaps, but . . . Bigfoot?)

When you think about it, it’s not hard to see why SkyMall disappeared.  I don’t think I’ve ever seen any recognizable SkyMall item in anyone’s home or office.  And, if the products were designed for the idle rich, they’re really not likely to be back in coach on a United flight, are they?  But boy — SkyMall was the ideal disposable, briefly entertaining reading material for a boring plane flight. 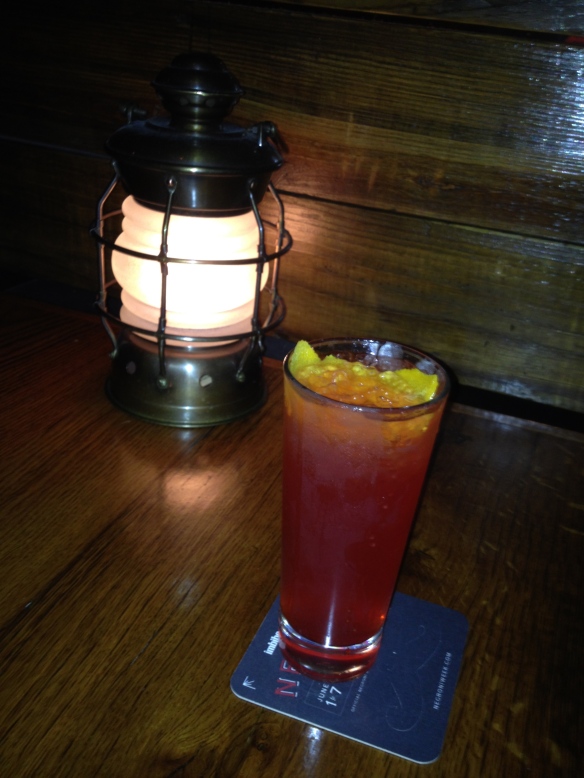 What do the idle rich do in the modern world?  Apparently, nothing.  That’s why they’re called the idle rich.

In the old days, though, the rich and titled did do worthwhile things . . . like invent cocktails.  Consider Count Negroni.  In 1919, this Italian nobleman decided that the recent end of World War I and the Spanish flu epidemic that was ravaging the world wasn’t going to keep him from experimenting with tasty combinations of different liquors and inventing a drink that he humbly named after himself.  At least, that’s the takeaway I got from a bar coaster at Curio that announced that last Saturday was part of Negroni Week — and if you can’t trust a bar coaster for accurate historical information, what has the world come to?

I figured that if a Negroni was so noteworthy that it has a week named after it, it was worth a taste.  For those of you, like me, who had never tried a Negroni, the basic concoction is made with gin, vermouth, and Campari, garnished with an orange peel.  It’s an interesting drink, with a complex taste (and aftertaste) that includes some bitterness.  It’s not a drink for everyone — but I can see where some people could grow to love it, and where the old Count might decide that he had come up with a winner.