More than a year ago, my iPod unexpectedly died on me.  I didn’t have any of my iPod songs or playlists on iCloud, nor did I have my iPod playlists on iTunes. 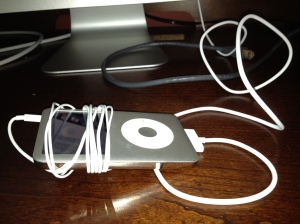 This was a disaster of the first order, because I love to listen to music.  I crave music, and I had created playlists to suit my every mood.  Suddenly, all of my carefully crafted playlists were . . . gone.

After a solemn ceremony and reassurance from the Genius Bar that I truly was screwed, I bought a new iPod and decided to start all over — going through every song on my iTunes library, from A to Z.  I’ve been doing it for more than a year now.  Along the way I deleted songs that were duplicative, or songs that I didn’t like.  Those that remained were placed into new  playlists.  My progress was delayed when our old iMac also quit on me, but I kept at it.

Tonight, after more than a year of work, I finished culling the iTunes library and rebuilding the iPod.  I went through an original library of more than 15,000 songs and chopped it down to a mere 7716, starting with Take on Me by a-Ha and ending with Love Song by 311.  I’ve got baroque, and Motown, and holiday music, and Ashokan Farewell, and Sharp Dressed Man, and Jeff Beck’s Freeway Jam.  I’ve got it all in my little bit of metal magic that’s smaller than a pack of cigarettes, and I’m ready to face the world again.

I’ve still got work to do, adding new songs from time to time, tinkering with the playlists, and perhaps creating a few more that I might discuss in the future.  But tonight I’m done with my year-long project, and I feel like celebrating.  Time to unhook the iPod and listen to Derek and the Dominos’ Key to the Highway.

Richard was home for a few days last week.  It was great to see him and catch up on how he’s doing — and it was also great because I got to tap into our very own “Genius Bar” and solve a problem that had flummoxed me for weeks.

Any parent with kids under the age of 30 knows what I mean.  They’ve grown up with technology, are wholly comfortable with it, and seem to know, intuitively, how to fix any problem.  Richard and Russell have solved countless technology issues that have perplexed me — whether it is setting up wireless networks or explaining cell phone functions or diagnosing computer problems.

I was trying to deal with fallout from the demise of our old iMac.  My iTunes were on the old iMac and my iPod was synced with it.  I had the Apple folks remove the hard drive, bought a shell to store the hard drive and allow it to be connected to the new iMac, and was able to do that — but I couldn’t figure out how to transfer my iTunes from the old hard drive to the new computer.  The prospect that I would not be able to do so really sucked, because it meant my old iTunes were lost forever, I couldn’t sync my iPod with the new computer, and ultimately I probably would have to rebuild my iPod and its playlists.

When Richard was home I asked for his help.  He took a look and immediately figured out what to do, transferred the music, and this morning I was able to sync my iPod without losing everything on it.  Thanks, Richard!

And, incidentally, I disagree with those who will contend that this means I have officially moved into the “helpless and clueless senior” category.  I would argue that there is, or should be, a technology exception.

After a few weeks of trying to make do with just Richard’s old laptop, I broke down today and bought a new iMac.  I was just afraid that Richard’s laptop, which already has no battery power and is somewhat battered, was going to break down.  Given that computers have become my main informational resource, I thought we just couldn’t do without one. 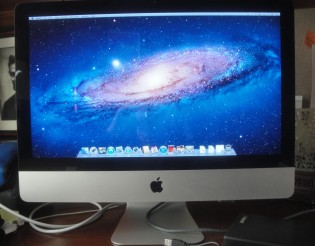 I’m enjoying the wireless keyboard and the magic mouse, which are big improvements in my book.  The screen is a bit bigger, which is nice for my aging eyeballs.  There are some weird new icons on the desktop, though, and I can’t yet figure out how to access the stuff that was on the hard drive of our old computer.  That will just have to be a new project.

There’s a kind of “getting to know you” period when you get a new computer, even if it is just a newer model of the kind of computer you had before.  (In our case, a much newer model.)  It’s like getting a new car.  For a while you have to figure out where the windshield wipers are, and how to program the radio to your favorite stations.  The things fall into place and the car, or the computer, become as familiar and comfortable as an old shoe.

Yesterday, I got the bad news that I feared — the resolute iMac, faithful blogging friend and desktop companion, has permanently given up the ghost.

Earlier this week the iMac screen went opaque.  I turned it off, hoping it was just a rebooting issue, but I couldn’t turn it back on.  Yesterday I took it to the Apple store and the blue-shirted folks at the Genius Bar opened it up.  It was weird seeing the iMac with its innards exposed — like being present in the operating room when a family member is getting an appendix removed.

The Geniuses took one look, saw that the capacitors were blown out, and advised, with appropriate respect and regret, that nothing could be done.  Our iMac is so old — or, as one of the Apple Geniuses said, “vintage” — that they don’t even make replacement capacitors for it anymore.  We removed the hard drive so that I can try to retrieve stuff from our iPhoto and iTunes folders, closed it up, and I carefully carried it back to the car.

The demise of the iMac leaves a physical void on the desktop in our study, and I think wistfully of its 8+ years of steady reliability and service.  But life goes on.  I’d welcome any suggestions from readers about Apple desktops that can fill the void and try to fill the big shoes left by the iMac.

We’ve had our home iMac for six years, and during that long period (too long, according to Richard) it has served faithfully and well.  Lately, however, it has been a bit slower than normal, and somewhat balky.  I asked Richard to take a look at it, and he found that in six years we had managed to use up a lot of space, which could be slowing the iMac down.  He deleted a few programs for old games, but also pointed out that by far the biggest user of space was our iTunes.  It would be a good thing, he said, to go through it and see whether any of the music could be deleted. 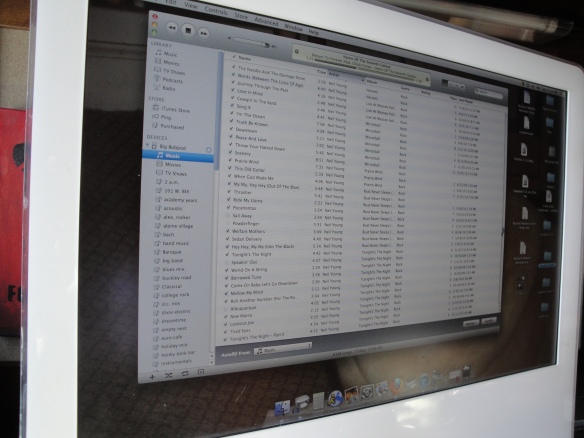 It’s amazing what kind of stuff you accumulate on a home computer over the years, and iTunes is no exception.  We had some 93 GB of music on the iTunes, and as I began deleting I found that it was pretty easy to do so.  How did Britney Spears and Jessica Simpson get on there, anyway?  (How embarrassing!)  I don’t think I’ll need, for now at least, the Arabic language primer that I downloaded when we were preparing for our trip to Egypt.  And — sorry, Russell! — I don’t have any problem deleting the heavy metal, electronica, and hip hop/rap music that I don’t like and don’t listen to. The main purpose of the iTunes, now, is to store songs and sync my iPod, so we don’t need to keep music that is never going to make the iPod cut.

So far I’ve deleted about 25 GB of files that were on the iTunes.  We’ll have to see whether the iMac becomes a bit more frisky as a result — but in any event it feels good to discard some of the outmoded musical baggage and cull the iMac herd.

Our large home computer — the faithful, yet aging, iMac — went on the fritz about three weeks ago.  It was a devastating development.  All of our photos are on the iMac.  All of my iTunes are on the iMac.  My iPod is synced to the iMac, and therefore I couldn’t load new holiday songs.  Blogging continued, fitfully, through use of an old laptop, but it wasn’t as easy as it would using the wide, responsive iMac keyboard.  It made me realize how much of our lives and conveniences are tied up into one computer unit.

The problem with the iMac was one of those annoying, frustrating computer issues.  The unit would turn on but never engage.  Instead, you would see the Apple logo and a ceaselessly spinning wheel.  After starting and restarting, plugging and unplugging, tinkering with power supplies, and whispering fervent but unanswered prayers to the capricious technology gods, we finally broke down and took the iMac to the nearby Apple store.  They promptly and happily fixed the problem, and now the iMac is back in its rightful place on the desktop, ready to provide crucial services in the Webner household.

Tonight, at least, all is right with the world.