HBO has confirmed two of the four leads for the next season of True Detective.  They are Colin Farrell and Vince Vaughn.

Is this the same True Detective that featured tough, riveting, two-fisted portrayals of Louisiana cops by Matthew McConaughey and Woody Harrelson?  You know, the one that followed two radically different personalities over a number of years and believably depicted how they became close friends while they were trying to track down a terrible, twisted serial killer?

The same True Detective that Kish and I concluded was one of the very best TV shows we’d ever seen, period?

I thought Vince Vaughn only made stupid, cookie-cutter comedies with Owen Wilson that people stopped going to about five years ago.

HBO is pretty good at casting against type.  Maybe Vince Vaughn is tired of portraying an oily, bloated, fast-talker and wants to get into a serious role that allows him to show he can actually act.  I’m not sure it will work, but it’s certainly an intriguing casting choice.

As for Colin Farrell, if he shows the same acting ability he showed in In Bruges, I’ll buy it.

My voyage from Porto to Bruges on the 28th was a big turning point in my trip: I was leaving Latin Europe for Germanic Europe. For the first time, I would be outside the borders of the former Roman empire.

I experienced some culture shock after arriving in Bruges – surprising, considering that I didn’t experience any when I arrived in Istanbul from the U.S.A. The chilly, windy, cloudy weather made me homesick for the Mediterranean clime. The people seemed more reserved. The prices were higher. I understood less of the language (my Latin and tiny bit of Italian help me with the Romance languages). However, I quickly acclimated myself, thanks in large part to the coziness that even the buildings in Bruges seem to radiate.

In Bruges, in case you haven’t seen it, is a movie about two hit men hired to kill someone in Bruges, who develop spiritual qualms when they see what a nice city Bruges is. I think that the director got his idea for the movie from walking around the city and taking in the atmosphere. It’s a pretty, peaceful, unpretentious town unsuited for murdering.

I was only in Bruges for two nights, and I spent much of my time planning the rest of my trip, so I didn’t have as much time for sightseeing as I’d have liked. I took a walk recommended by an employee at my hostel, which took me past some beautiful canals, windmills and Flemish architecture into a part of town that was empty due to lack of tourists. According to a brochure I read while in Bruges, the city has more tourists than local residents in the summer.

My hostel, the Snuffel Backpacker Hostel, had a bar for a common area – a quality I usually hate in a hostel. But, they served a great local beer called Brugse Zot.

On my last night in Bruges I spent 7 euros to see Tree of Life at a local theater. They showed it in English with Flemish subtitles. I thought it was great, but many of the other people in the theater didn’t have much patience for its slow pacing and lack of dialogue. They cheered when the movie ended, not in a complimentary way.

The next day I took a train to Amsterdam. Frankly, I didn’t like Amsterdam much. My hostel was in the middle of the red light district, somewhere you don’t want to take a walk through at night. Just down the block from my hostel, there were prostitutes behind glass doors with red lights on top. 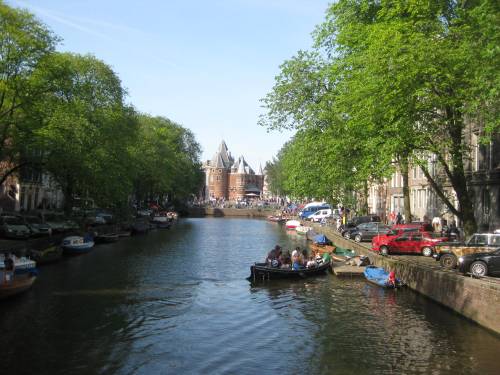 The city is rather pretty outside the red light district, however. It reminded me of a blown-up Bruges, with wider canals and bigger buildings.

On my first afternoon in Amsterdam I went to the Van Gogh Museum. I was expecting a mixed experience after Roland told me that he was kicked out for making a sketch there. An art museum that doesn’t allow artists to make sketches doesn’t have its priorities straight. Yet, I enjoyed my time there, thanks to the large variety of Van Gogh’s work.

The next morning I went to the Anne Frank house. It was fascinating to see the small, winding rooms I remember imagining when I read Anne Frank’s diary in 8th grade English class. I can’t imagine living in such close quarters with so many other people. I suppose that being in such a tense setting provided the creative fuel for Frank’s diary, which is so insightful for a 13-year-old.

Amsterdam has more cyclists than any other city I’ve been to. There are extra lanes for bikes between the roads and the sidewalks that you quickly learn not to walk across carelessly. Sometimes the cyclists make it hard to navigate the streets as a pedestrian, but thanks to them there are very few cars on the road.

I spent four and a half days in Amsterdam – three nights, plus a fourth day before boarding an overnight train to Copenhagen. I later wished I could have added one of the days to Bruges or Copenhagen. I spent most of my time in Amsterdam wandering around the canals or chilling out at my hostel.