Pulp Fiction is a great movie.  In my view, so is Reservoir Dogs.  I thought Inglourious Basterds was pretty good, and the Kill Bill duo were interesting and entertaining films, too.  Those movies made many of us willing to go to any Quentin Tarantino movie, just to see what he’s come up with next.

The Hateful Eight isn’t a great movie, however.  It’s not even close.  In fact, I’d be hard-pressed to think of a movie that I found more affirmatively offensive and unpleasant to watch.  And when Kish and I left the theater yesterday, I decided that I’m done with Quentin Tarantino movies. 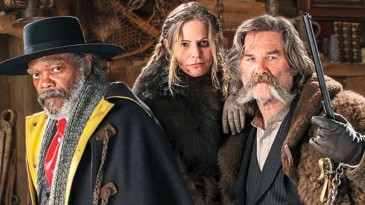 He’s still got a huge amount of talent, there’s no doubt about it.  He can bring slow-building, eventually unbearable tension to a scene better than just about any other living director, he’s still got the ability to inject quirky humor into movies in unexpected ways, and the photography and staging of some of the scenes in The Hateful Eight — especially in the first part of the movie, when a stagecoach is moving through snow-bound Wyoming sometime in the 1870s — is terrific.

But Tarantino has, I think, gotten lazy.  He comes up with a good setting and idea — a bounty hunter taking a fugitive to a town to be hung when a blizzard makes him stop at a way station filled with mysterious strangers — and won’t do the heavy lifting to get the idea into a tight, taut script.  So you end up with what The Hateful Eight is:  an exercise in hyperviolent shock theater, where Tarantino seemingly has simply dreamed up new ways to push the boundaries of Hollywood films beyond the breaking point.

(Don’t read this paragraph if you plan on going to The Hateful Eight don’t want to have some of the plotlines spoiled.)  So filmgoers are bludgeoned with constant use of the n-word. They get to see a woman punched out repeatedly.  They have to watch a naked man performing oral sex on a bounty hunter in a snowy Wyoming field.  They see a dead man’s arm chopped off so a woman who is chained to him can make it to a gun.  They witness a woman being hung, kicking and twitching, from the rafters.  And they see just about everyone who appears in the film die a horrible death, some by poison that makes them vomit up enormous gouts of blood but most by just about every type of gunshot wound — including pistol shots that make their heads explode, shotgun blasts that spray red chunks of flesh toward the screen, bullets that blow off their gonads, and every other form of gunplay that a disturbed mind could concoct.  The film ends with the two wounded survivors soaked in gore and surrounded by carcasses — and, for me at least, a sense of immense relief that the killing and racist language and other unrelenting unpleasantness would finally, blessedly, stop.

Maybe there’s an audience for this kind of stuff, and I am sure that some apologists would argue that Tarantino’s staging of death after death after death shows deft camera work or pays tribute to Hitchcock or Sergio Leone or some other famous director, but don’t be fooled.  This is a sick and appalling movie made by someone who’s resting on his laurels and apparently needs a payday.  It’s too bad that a really good cast — including Kurt Russell, one of my favorites — wasted their time on this dismal effort.

When you go to a Quentin Tarantino film, you don’t expect historical accuracy, or even plausibility.  Instead, you expect a glimpse of Tarantino’s dark, twisted soul.  You expect to see hyperviolence.  You expect a few scenes of torture.  You expect kitschy credits and ’60s vintage music.  You expect uncomfortable, non-politically correct things to happen.  But you also expect crackling dialogue, and unexpected humor found in oddball situations, and a few stunning set pieces that simmer with high-wire tension that builds and builds and builds until you almost can’t breathe.

I thought Reservoir Dogs and Pulp Fiction and Inglourious Basterds were terrific movies.  They showed what Tarantino can bring to the big screen.  I was more than willing to take the occasional over-the-top Hitler death scene along with all the really good moviemaking.

Django Unchained isn’t terrific, however.  In fact, I’d say it sucks.  I wouldn’t watch it again, and I wish I had the 2 hours and 40 minutes I spent in the theater squirming at my latest exposure to Quentin Tarantino’s weirdness.  It’s overlong and apparently unedited and, even worse, it’s really kind of boring after you become desensitized to all the blood and guts.  Only one scene, where members of an early version of the KKK debate the quality of the hoods they’ve been provided, has the kind of witty, hilarious dialogue that made Tarantino famous.  But as for the Tarantino hyperviolence — well, prepare to be drenched in it, and in the sickest forms imaginable.  You’ll see great geysering gouts of blood by the gallon.  You’ll see dozens of people blasted to oblivion and screaming in agony.  You’ll see a captured slave torn apart by dogs, slaves whipped and branded, slaves tortured and beaten to death with a hammer.  And you’ll hear the “n” word, time and time and time again.  I kept thinking to myself:  “What’s the point of all of this?”  And I concluded that there was no point, really.

This movie has quite a cast — Jamie Foxx, Samuel L. Jackson, Christoph Waltz, and Leonardo DiCaprio, among many others — and they turn in good performances, I suppose . . . but it’s hard for me to get past all the violence and the feeling that the movie really somehow cheapens and exploits the entire appalling history of slavery in America.  When I left the theater, I felt like I needed to take a shower.  I also found myself wondering if the fountain of Tarantino’s creativity has run dry, and his only response is to just try to shock.

With the number of recent, real-life hyperviolence incidents we’ve experienced in this country, I also find myself wondering about Hollywood.  Do we really need to make so many movies where corpses could be stacked like cordwood, and the message is that one man with a gun can kill all of his enemies and right all the wrongs by blowing his enemies to Kingdom Come?

The hottest ticket at this year’s Berlin Film Festival is a self-proclaimed “B Movie” called Iron Sky.  Its consciously over-the-top plot features Nazis trying to conquer Earth from a swastika-shaped base on the far side of the moon.

I doubt Iron Sky will ever make it to our local multiplex cinema, but the movie’s popularity shows, once again, that people are endlessly intrigued by Nazis.  Books, movies, and TV shows involving Nazis always seem to find an audience.

The original Star Trek had two episodes involving Nazis — one in which a drug-deranged Dr. McCoy goes back in time and changes history so Germany wins World War II, and another where a famous historian tries to help a culture by modeling it on Nazi Germany, with predictably disastrous results.  Nazis make great bad guys (and often comic relief), as Raiders of the Lost Ark, Indiana Jones and the Last Crusade, and Inglourious Basterds, among many others, have demonstrated.  Some years ago the book Fatherland, about a detective who uncovers a dark secret in a triumphant Nazi Germany, was a best-seller.  Alternative histories in which Germany prevails in World War II also are a staple of that genre.

Nazi Germany was one of the most brutal, bloody, awful regimes in the history of the world.  Why is it such a popular subject for fiction — to the point where it can even be the subject of humor?  Why does Nazi Germany seem to be a far more popular setting for fiction than, say, Imperial Japan?

Perhaps it is just because Nazi Germany, with its goose-stepping soldiers, stiff-armed salutes, and elaborate uniforms and ceremonies, already seems so fantastic that it is especially well-suited to whatever embellishment a creative mind could supply.  I also wonder, however, whether fictionalizing Nazi Germany is just a kind of cultural defense mechanism.  If you routinely depict Nazi Germany as a setting for outlandish activities, maybe it is easier to forget that a racist, bloodthirsty, soulless government actually existed, slaughtering Jews by the millions and dominating Europe, only 70 years ago — within the lifetimes of millions of still-living people.

Yesterday, my friends and I went to the Arena Grand to see Quentin Tarantino’s new movie, Inglorious Basterds, which he has supposedly been working on for almost a decade. At the very end of the movie, after carving a swastika into a Nazi’s forehead, Brad Pitt’s character turns to the camera and says “I think this is my masterpiece.” Obviously, Quentin Tarantino was speaking to the audience with this line, and is quite proud of this movie.

Tarantino should be proud. He took his usual routine – humorous violence, cool villains, non-stop cheesy pop culture references – and made it work in the setting of the Holocaust, a historical event that few like to joke about, at least openly. Tarantino’s style is toned down slightly, since the 1940s didn’t have the cheesy pop songs or fast food orders of the late 20th century, but everything is still there. When one character, known for killing dozens of Nazi SS officials, is introduced, his name shoots across the screen in bold, bright letters that look like they came from the seventies, and a power guitar chord is sounded. The movie also features a montage set to David Bowie and Giorgio Moroder’s early eighties hit “Cat People”.

Despite Tarantino’s sarcasm, I never felt that the gravity of the Holocaust was disrespected. Brad Pitt’s crew of American Jews intent on killing as many Nazis as possible is always understood to be on a righteous mission, despite their ruthlessness. If anything, the Holocaust setting makes Tarantino’s formula work better. Tarantino’s movies have always glamorized violence, and the fact that most of the violence in Basterds is affecting Nazis makes it easier to enjoy. The scenes that show the violence and hatred of the Nazis are intense and could upset some people, but they served to make Brad Pitt’s murderous acts more excusable and, frankly, enjoyable. They are certainly easier to root for than John Travolta’s character in Pulp Fiction and even Uma Thurman’s in Kill Bill.

The movie is flawed, mostly in the same ways all of Tarantino’s movies are flawed. The dialogue sometimes drags on too long and feels awkward, some characters (including Brad Pitt’s) are underdeveloped, and the movie itself is too long. But it is good, and Tarantino should get credit for presenting the Holocaust from a new, bold perspective, and doing so quite masterfully.