Tomorrow is St. Patrick’s Day. It’s a day when everyone is Irish, or at least claims to be.

The Webners are no different. Richard recently took one of those mail-in DNA tests, and the results showed a significant percentage of Scotch-Irish DNA. I get the Scottish part; our extended family tree includes Neals, McCollums, and Fergusons. My grandmother, born a Brown, claimed Irish ancestry, and I’ve no doubt that there are other, now-unknown branches that undoubtedly touched the Emerald Isle. It’s enough, at least, to allow us to celebrate March 17 with a heartfelt Erin go Bragh.

I’m proud of whatever Irish ancestry we have. In my view, you have to give the Irish credit — of all of the countries that have contributed to our melting pot nation, the Irish have the best traditional holiday, by far. St. Patrick’s Day blows Columbus Day and Cinco de Mayo out of the water, and most other countries aren’t even in the running. There’s no Deutschland Day, or British Bash. And no other country has the branding of Ireland, either. Whether it’s leprechauns, shillelaghs, four-leaf clovers, or pots of gold at the end of the rainbow, the Irish stand alone at the top of the heap.

It’s also admirable that the Irish made drinking beer an essential part of St. Patrick’s Day. Sure, we know St. Patrick had something to do with chasing snakes off the island, but most people associate the holiday with beer. Beer drinking also is an essential part of the culture of the Germans, the Brits, the Belgians, and even the French, but the Irish have co-opted it completely. Years ago, some savvy Irishman obviously understood that focusing a holiday on beer-drinking is bound to increase the amount of participation.

St. Patrick’s Day is an easy day to celebrate: you wear something green and drink beer. You don’t have to go to church, and there’s no significant physical danger involved, such as you might find in running with the bulls in Pamplona. Instead, there’s just an opportunity to bend an elbow with your friends, quaff a few dozen ales, and pretend you like droning Celtic music. The only risk is being punched in the face by some drunken, red-faced IRA member, getting a wet kiss from a beefy red-headed woman wearing a “kiss me, I’m Irish” pin, or ending up face down in a vomit-filled gutter. 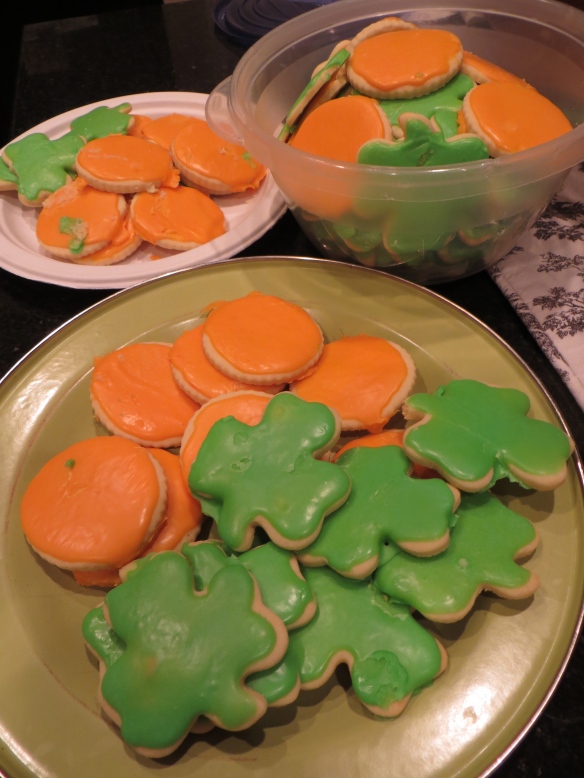 Happy St. Patrick’s Day to all of our friends who are Irish and Irish wannabes.  Although we have a touch of Irish ancestry on my Mom’s side of the family, I’m not a green beer drinker or a huge celebrant of the holiday.  I decided to mark the occasion, instead, with some cookies shaped like shamrocks and the gold coins found in the leprechauns pot of gold that I’ll be delivering to Mom today.