I’m in Boston for meetings, and last night I went to an event at the John F. Kennedy Presidential Library and Museum.  I had a chance to walk through the exhibits, which included photographs, letters, television footage, a recreation of the Oval Office as it was in the Kennedy White House, shown above, and a gigantic American flag high above the reception area, shown below.  Of course, the exhibits end with the tragic events of November 22, 1963 and an effort to capture JFK’s legacy.

JFK’s presidency has always been a huge historical “what if” — Steven King wrote an entire novel exploring that premise — and a story of unfulfilled promise.  Viewed from the standpoint of the modern era of PACs, attack ads, internet memes, and rancorous “debates,” though, it seems like a golden era, where politics was less bitter, less nasty, and less divisive.  For all of the heightened feelings about the Bay of Pigs, the Civil Rights movement, the Cuban missile crisis, and the fighting in Southeast Asia, Americans somehow managed to avoid the bleak corrosiveness that now seems so pervasive in our politics.

I’ve never bought into the depiction of the Kennedy presidency as Camelot, but I don’t think you can walk through the exhibits at the JFK Library and Museum and compare what you see to the present day without thinking our system has taken a wrong turn somewhere. 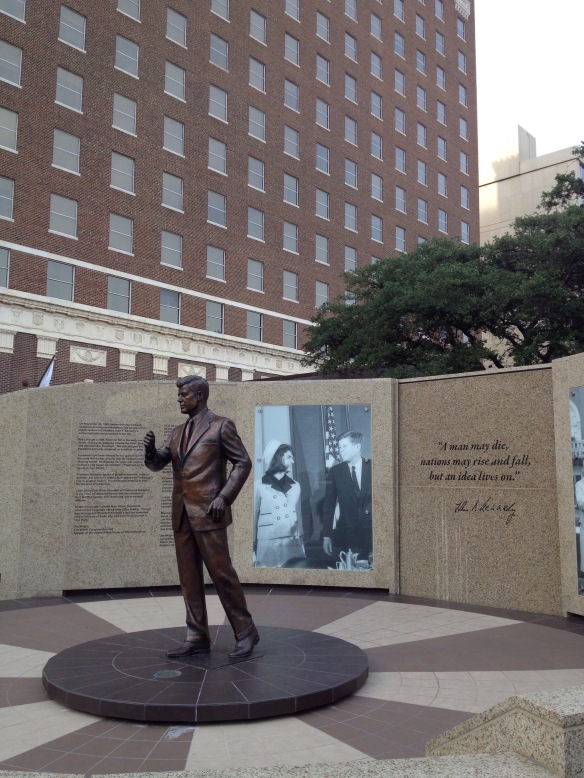 I’m in Fort Worth, Texas for meetings and spent last night at the Fort Worth Hilton because it’s close to the meeting location.  When I learned the hotel also is the site of John F. Kennedy’s last speech, it gave me a chill.

JFK spoke here on the morning of November 22, 1963,  at a breakfast meeting of the Fort Worth Chamber of Commerce.  For a man who was a forceful orator and turned many a memorable phrase, the speech is a thoroughly unremarkable effort, with a standard joke about Jackie Kennedy’s celebrity status, recognition of the politicians and dignitaries who were present, and then a discussion of Fort Worth’s contribution to the continuing need to maintain a strong defense against the Communist threat.  The speech, of course, gave no hint that the history of the country and the world would shift forever a few hours later due to an assassin’s bullet.

There is a little plaza next to the hotel that commemorates the occasion with a statue of JFK, some photos, and some quotes from his speeches.  One of them is:  “A man may die, nations may rise and fall, but an idea lives on.”. With the red brick hotel looming in the background, it’s a sobering place.