We’re leaving Montreal today, and as we passed through each stage of the travel process at the United terminal of the Pierre Trudeau International Airport I was struck at how much of our lives has become automated and self-directed.

We used the standard ticket terminals to check in, entering our confirmation numbers and scanning our passports and credit cards and retrieving our boarding passes from the printer slot at the bottom.  The agent directed us to an automated baggage loading machine, where we scanned our tickets and input information into a terminal, hoisted our bags on a conveyor belt, then watched while a laser scanned our bags and a machine lowered them into the vowels of the airport.  It’s the first time I’ve used one of these machines, but the instructions are easy enough to follow and they are bound to discourage travelers from overpacking super-heavy bags.  We went through all of the security scanning devices, then moved to Customs. There we found another machine on which we scanned our passports and had our pictures taken — they were unflattering, of course — before talking to the Customs agent and passing through to our departure gate.  It’s the first time I’ve encountered one of those machines, too.  I’m sure it’s just a matter of time before we see all of these devices in the U.S.

Science fiction has long forecast that we would enter the age of robots and machines. I think it’s here, now.

Google has announced that it will be building and producing its own self-driving vehicles, rather than retrofitting cars produced by other manufacturers.  The announcement means that we’re one step closer to the future envisioned in sci-fi books of days gone by — but I’m not sure it’s a future that I like.

According to the BBC story linked above, the Google car will look like a cute little cartoon bug, with two lights like eyes.  (That’s a specific design feature to make a self-driving car seem more harmless and fun and to encourage people to give it a try.)  It will seat two, be electrically powered, have a top speed of 25 mph, and have only a stop-go button — no steering wheel or pedals.  The car will follow Google maps built for the vehicle and operate using radar and laser sensors.  Google says its self-driving cars have already covered 700,000 miles of roadway, and it will produce a fleet of 200 cars and test them in Detroit within a year to make further advances in self-driving technology.

Advocates of self-driving cars say they will be safer for the car’s drivers, for other drivers, and for pedestrians.  If the cars are limited to 25 mph, of course, there is bound to be a safety enhancement, because there is a direct correlation between vehicle speed at the time of a crash and severity of injury.  Pedestrians also will benefit by a design that features a foam front end rather than a bumper.  But the safety arguments go deeper than that.  They assert that computer programs, lasers, and machines are bound to be more precise and careful on the road than humans, with no risk of distracted, texting drivers, drunken, impaired drivers, or macho, road raging drivers.

I’m somewhat skeptical about relying wholly on a machine guidance system — anyone who has GPS knows that it isn’t infallible — but more than that I’m leery of a future where machines do more and more for human beings.  We’ve already got problems with people becoming less active, less creative, and less self-reliant; self-driving cars is just another step toward a future of flabby, passive people waiting for a machine to move them around in slow-moving cars designed to maximize safety and security.  Sorry, but I don’t like it. 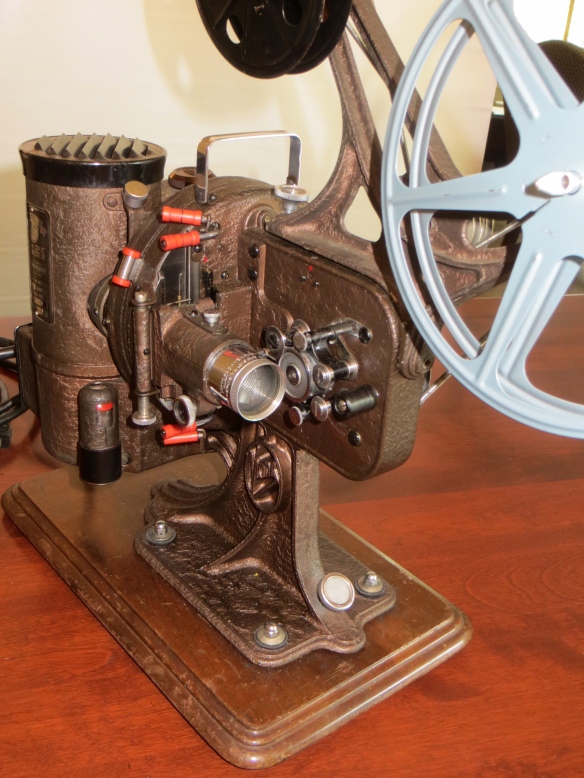 One of the items taken from Mom’s basement was this Victor Animatograph Corporation 16 mm Cine Projector, Model 11.  From the design of the machine, and the lettering, I’m guessing it dates from the ’30s.

It’s an impressive device, made with lots of metal and burnished plating and a sturdy wooden base.  It probably weighs between 20 and 30 pounds.  Amazingly, it still seems to work perfectly — with the the original fan, motor, and lens.  Even the original light bulbs haven’t burnt out!  Richard and I had some fun figuring out how to thread the film and marveling at the ingenuity of the design.

Unfortunately, we don’t have any 16 mm film to run through this this well-preserved projector.  The carefully made machine has outlived its form of technology, like a car that still runs perfectly but has no road to drive on.

I was at the GE Aviation Center in suburban Cincinnati yesterday to participate in a CLE program.  The Learning Center on the GE campus features huge examples of the aircraft engines that GE has built there for decades.

It’s jaw-dropping to walk around these enormous, intricately designed and manufactured engines that are capable of producing earth-shaking power and thrust.  I was particularly struck by the GE-90 pictured above, a massive engine large enough for a person to stand upright in, yet possessed of obvious grace and artistic quality with its curved blades.