Sears announced this week that it is going into bankruptcy.  Once the largest retailer in the United States, Sears disclosed in August that it was closing 46 stores, and with its bankruptcy filing this week Sears identified another 142 stores that will be shuttered. 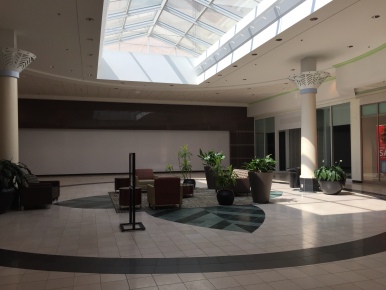 If you’ve been to one of the ubiquitous indoor malls in America recently, you didn’t need the bankruptcy filing to tell you that Sears has been having serious problems.  For years, Sears was one of the mainstay, “anchor” tenants in countless malls, usually located at the end of one of the concourses.  Sears and other department store tenants were key parts of the mall structure, giving shoppers a chance to check out their varied offerings, from women’s clothing to home furnishings to makeup and perfume, before the shoppers wandered out to hit The Gap or Foot Locker while sipping a drink they got from Orange Julius.  For generations of kids, the “mallrat” experience with their friends on a weekend day was a big part of growing up.

But if you’ve been to one of those malls recently, you’ve seen that some of those big storefronts for the anchor tenants at the end of the concourses are vacant.  Kish and I went to a mall in Bangor, Maine this summer, and it had the big void where one of the department stores used to be.  Many of the slots adjacent to the anchor location also were empty and closed up, leaving the whole section of the mall, where I took the picture for this post, feeling shuttered and empty.  And there’s nothing quite so desolate and deserted as a cavernous mall that is totally devoid of shoppers.

I’m old enough to have seen the whole arc of the American mall story.  I remember when the Summit Mall in Akron, Ohio opened to great fanfare, drawing throngs of shoppers away from the downtown stores to one convenient location.  In Columbus, the City Center mall in downtown Columbus opened in the ’80s as a key part of the downtown Columbus redevelopment plan — but then it failed within only a few years, to be torn down and replaced by a park.  The new approach to retail eschews the closed mall design in favor of open air developments like Easton in Columbus — which feels a lot like the downtown shopping areas that got elbowed to the curb by the malls.  Now we’re seeing many malls struggle, and in some extreme cases, city planners are left wondering what the heck to do with the huge, empty edifice that used to be a roaring hub of commercial activity and tax revenue.

And now Sears is going into bankruptcy.  The story linked above reports that liquidation sales at the 142 stores that are closing will begin in the next few weeks.

Richard had a story recently about the unexpectedly rapid demise of a Jacksonville-based company called Body Central, which sold clothing to teenage girls and 20-somethings in the “fast fashion” industry segment.  After years of strong growth and expansion of its outlets into new malls, Body Central suddenly hit the wall and closed its doors.  Richard’s story is an interesting treatment of the arc of a company’s existence in modern America.

What happened?  Basically, capitalism.  Body Central, and other stores catering to the same market segment, kept expanding to new locations and storefronts and expected the demand for clothing from teenage girls and young women prowling the malls to continue to grow indefinitely.  But the tastes and buying habits of Body Central’s target audience changed.  They decided that going to malls wasn’t necessarily the bees’ knees and started looking for more clothing on-line.  In the meantime, Body Central had growth-related problems, like managing distribution centers.  Revenues shrank, efforts to redesign stores to reattract customers failed, and ultimately the enterprise crashed.

Capitalism has a long and proven track record for incentivizing production, creating wealth, and enhancing efficiencies — but it’s a messy process.  Businesses begin, occasionally thrive, and often fail.  Sometimes the failures are of mom-and-pop shops, but sometimes they are of companies that experienced some success but just couldn’t move to the next level, and sometimes the failures are of mega-corporations like Blockbuster that are killed by new technologies, changing consumer tastes and buying habits, and competitors who develop a better product or service.  It happens, but it doesn’t make the situation any more enjoyable for employees who are out of a job when the company hits the wall.

Goodbye, Body Central!  You’re just the latest in a long line — and you won’t be the last.

I’m up in Minneapolis for meetings and was scheduled for a lunch at Crave, a restaurant in the Mall of America.

The restaurant was fine; the Mall of America was . . . too much.  Too much noise, too much colorful eye-catching signage, too much over-the-top indoor amusement park activity, too much of just about everything.  I sat at a sticky table in one of the food courts recharging my cell phone battery, listening to the shrieks of kids on roller coasters and smelling the sickly sweet odor of food court ice cream and soft drinks, and thought:  Here is America, under one huge skylight, in all its excess and glory.

I must admit that the giant Lego Transformer and Lego helicopter were pretty cool.