The New York Times is reporting that the market for high-end real estate in Manhattan may have finally hit the wall.  Developers who are targeting buyers willing to pay more than $10 million for condominiums and apartments — and in some cases more than $100 million — are having to cut prices and repackage their products.

Even with the changes to meet falling demand in the market, the prices being asked for high-end New York City real estate are beyond the comprehension of everyday people.  For example, a skyscraper at 432 Park Avenue was asking $78 million to $85 million for full-floor apartments; now the units have been divided and are being priced for around $40 million.  Some poor schmucks who are trying to sell properties they bought during the boom are even listing their units for less than the purchase price they paid.  One seller has listed a three-bedroom apartment they bought for $31.67 million in 2014 for the bargain-basement price of $29.95 million.  (Incidentally, isn’t it heart-warming to see that, even at these astronomical numbers, the notion still holds that pricing just a bit less than the next whole number might cause some potential buyers to bite?  Whether it’s $299,500 or $29.95 million, the rules apparently don’t change.)

Why has the market for ultra high-end properties topped out?  Some developers blame uncertainties created by Brexit, some cite Chinese restrictions on cash leaving the country, some point to lower oil prices curbing spending by the sheiks and sultans, and some note that the U.S. government has started to pay attention to people paying cash — cash! — for these pleasure domes.  Note that most of these reasons implicitly acknowledge that a lot of the buyers for Manhattan glitter palaces come from overseas.  Others involved in the business identify more conventional reasons:  real-estate developers have saturated what was always a small market to begin with, there’s little to differentiate the properties, and pricing just hit a ceiling.  In short, the laws of supply and demand still hold, and there are only so many jet-setters in the world who can comfortably drop between $50 and $100 million on living space they probably only use once in a while.

Fortunately for those of us worried about the financial health of Manhattan, the Times reports that the real estate market in lower price ranges remains robust, with lots of competition for homes selling for less than $3 million.  Less than $3 million?  In Manhattan?  What does that get you — a one-bedroom efficiency on the lower East side? 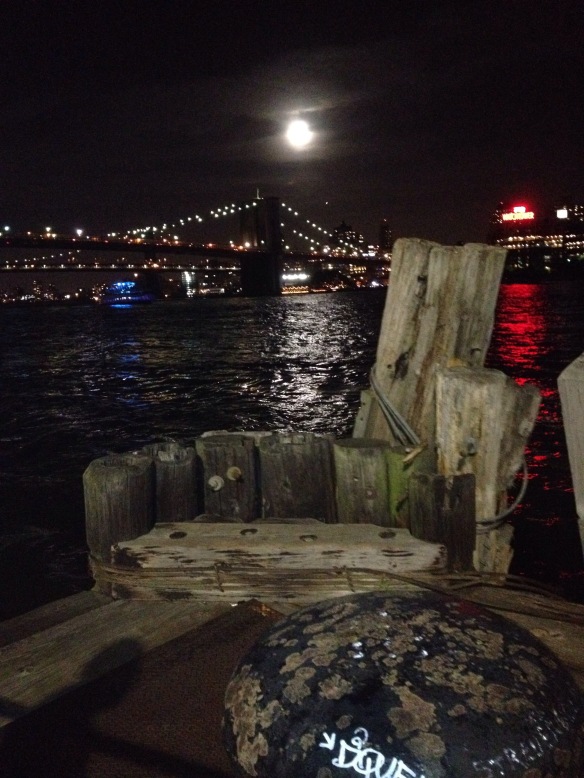 Last night after dinner the Red Sox Fan and I took a walk around the lower rim of Manhattan.  One of our stops was the South Street Seaport, which offers a dazzling view of the lighted Brooklyn Bridge.  It was a very cool area, with lots of people waiting for ferries and water taxis, and others — like us — just enjoying the night air and the scene.

I first had spaghetti and meatballs at a restaurant in Akron, Ohio called Sanginiti’s.  Grandma and Grandpa Nesl started taking UJ and me there when we were tykes.  It was a classic red sauce Italian joint with fake windows that looked out over blown-up photos of Venetian scenes, and its spaghetti and meatballs were to die for.

Ever since then, spaghetti and meatballs had been a comfort food favorite, and I get it whenever I can. Unfortunately, red sauce Italian food has fallen out of favor, and this classic dish is hard to find.

So, whenever I’m in Midtown Manhattan I stop at San Martin, a classic little restaurant near the Waldorf Astoria.  Its spaghetti and meatballs are excellent and really scratch my comfort food itch.  I stopped there last night and it was as good as I remembered. 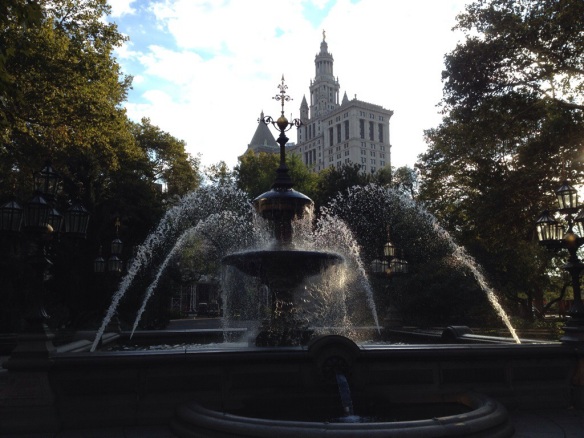 If you walk from Brooklyn over the Brooklyn Bridge to lower Manhattan, you will find the Brooklyn Bridge Park at the end of your journey. With its worn and comfortable benches, its shady vistas, and its beautiful fountain, it’s a great place to enjoy a cup of coffee on a cool and bright autumn morning. Fortunately, there’s a Starbucks nearby, ready to fill that need. (Isn’t there always?)

I don’t care how many time you’ve flown into LaGuardia, even the most jaded traveler has got to enjoy the approach that takes you right past downtown Manhattan and over the Brooklyn Bridge. Even on an overcast day, it’s one of the greatest sights in the world. Of course, it helps if you are on the skyline side of the plane.

I like to walk in the morning.  If you happen to be in Brooklyn on a hot summer morning, what better way to satisfy your walking jones than to take a hike across the Brooklyn Bridge to lower Manhattan and back again?

This morning the Red Sox Fan and I ventured forth before it got too hot.  It’s a trek that measures more than 3.5 miles, round trip, and takes you right down the middle of the bridge, over the traffic and under the massive stone supports and suspension cables.  It’s a wooden walkway with two way bike and pedestrian traffic that’s a tight squeeze in spots, but well worth it.  We hoofed it over the bridge, stopped for a cup of coffee in City Hall Park on the Manhattan side, and then turned around and walked back to the Brooklyn side.

It was a pleasant stroll on a sunny morning over a national landmark.  Reality intruded, however, when we passed some construction workers involved in the bridge’s renovation and overheard them casually talking about how the “jumper” last week had somehow survived his plunge.  That’s New York City for you, I guess.

On Saturday, Kish and I paid a brief visit to Russell, who is sharing space with multiple roommates in Brooklyn on the top floor of an aging apartment building.

His apartment includes access to the roof by steel ladder up a narrow passageway.  On a hot day, the rooftop affords better access to the cooling breeze, but you also feel the heat pulsing from the black tar roof.  And there is no railing, which is a bit disconcerting when you need to walk to the edge of the roof to get the view of the lower Manhattan skyline that appears in the far distance in the photo above.