So how in the world did we end up with a son who has the determination and perseverance and stamina to run more than 26 miles at a pop — and train for it to boot? I frankly admit that I am awed at what Richard is doing.

So forgive me if I take a minute to say that I’m proud of my son, the marathoner.  Way to go, Richard!

We proudly watched Richard run the Jacksonville Marathon today, on a muggy day that was densely fogged before the sunshine broke through to make for a hot last few miles. We tracked him as he progressed and cheered him on at mile 16, mile 18, mile 23, and then as he crossed the finish line on a high school track decorated with balloons.

It’s the first time I’ve watched a marathon, and it’s an amazing and impressive spectacle. I’ve got new respect for Richard, Mr. Jim McKeever, and other multiple-marathoners. I can’t imagine running 26.2 miles. 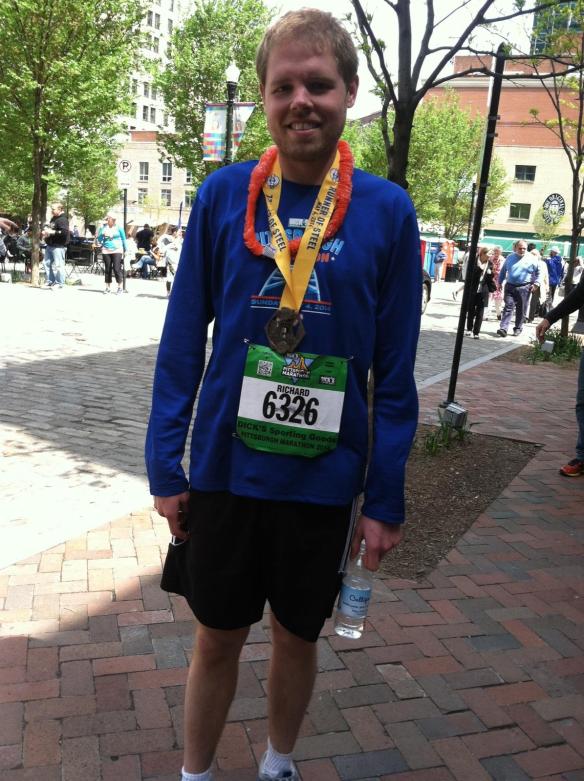 Congratulations to Richard, who ran in his first marathon today.  He covered the hilly, 26.2-mile course for the Pittsburgh Marathon in 3 hours, 43 minutes, which is an excellent time for a first-time marathoner.  Well done, Richard!

ETA:  According to the Pittsburgh Post-Gazette, Richard actually finished with a time of 3:42:34.

The 32nd Columbus Marathon — technically, the Nationwide Insurance Columbus Marathon — is underway.  The race began at 7:30 this morning, and 17,000 participants are now wending their ways through the streets of Columbus and neighboring suburbs on the race’s 26-mile route.

I’m not a runner, but I imagine today’s weather conditions are just about perfect for a marathon.  It is cool and dry, with cloudy skies so the sun won’t be beating down on the runners.  The route probably also is conducive to an enjoyable race — to the extent any grueling marathon can be said to be enjoyable.  The participants will start in the heart of downtown, run east and loop through Bexley, head back downtown and then south through German Village, north through the University District, then west through the streets of Upper Arlington before finally ending at the Nationwide Building.  It’s a great route to introduce people to Columbus.

Events like the Columbus Marathon close streets and may inconvenience some people for a day or two, but they are wonderful for our city.  The race brings thousands of participants and their supporters and gives people here a chance to participate in a true community event.  On Marathon Day, volunteers are everywhere, handing out water, directing runners, and helping to lead the cheers.

And who wouldn’t cheer for marathoners?  You have to admire their discipline as they train for months and work on improving their times. Here’s hoping that every runner today achieves his or her personal best.