We tend to think that the basic elements of human lives–things as fundamental as sleep patterns–have forever been as they are now. I’ve always assumed, without thinking much about it, that sleep means going to bed and sleeping straight through until waking up in the morning. The BBC recently published a fascinating article about research that squarely refutes that assumption–and shows instead that our current approach to sleep is inconsistent with the accepted practices that prevailed for many centuries.

According to the BBC article, humans used to have “two sleeps” as a matter of course. The “first sleep” would last for a few hours, until about 11 p.m., followed by about two hours of wakefulness–a period known in medieval England as “the watch”–after which people would return to bed and sleep until morning. This pattern was confirmed by sworn testimony in court records and multiple references in literature, and the research indicates that it was followed across different countries and cultures dating back to classical times, during the prolonged period when life was much more communal than it is now and it was typical for multiple humans to share beds or other sleeping quarters.

What did those who awakened from their “first sleep” do during “the watch”? The research indicates they did just about everything from the exalted (it was viewed by some as a good time for quiet religious observances and reflection) to the productive (peasants completed some of their many daily chores, stoked the fire, and tended to animals) to the mundane (the newly roused typically answered the call of nature). The BBC article also reports: “But most of all, the watch was useful for socialising – and for sex.” People would stay in their communal bed and chat with their bedmates, and husbands and wives, refreshed from the day’s exhausting labors by their “first sleep,” might find a place for some alone time before “the watch” ended and it was time to hit the crowded sack again.

What would the world be like if humans still followed the practice of “two sleeps,” and what would they do during “the watch”? I would guess that they would do just about everything that their medieval ancestors did–although with modern technology I imagine that many people would take “the watch” literally, and use the break in sleep to catch up on the latest offerings on streaming services. 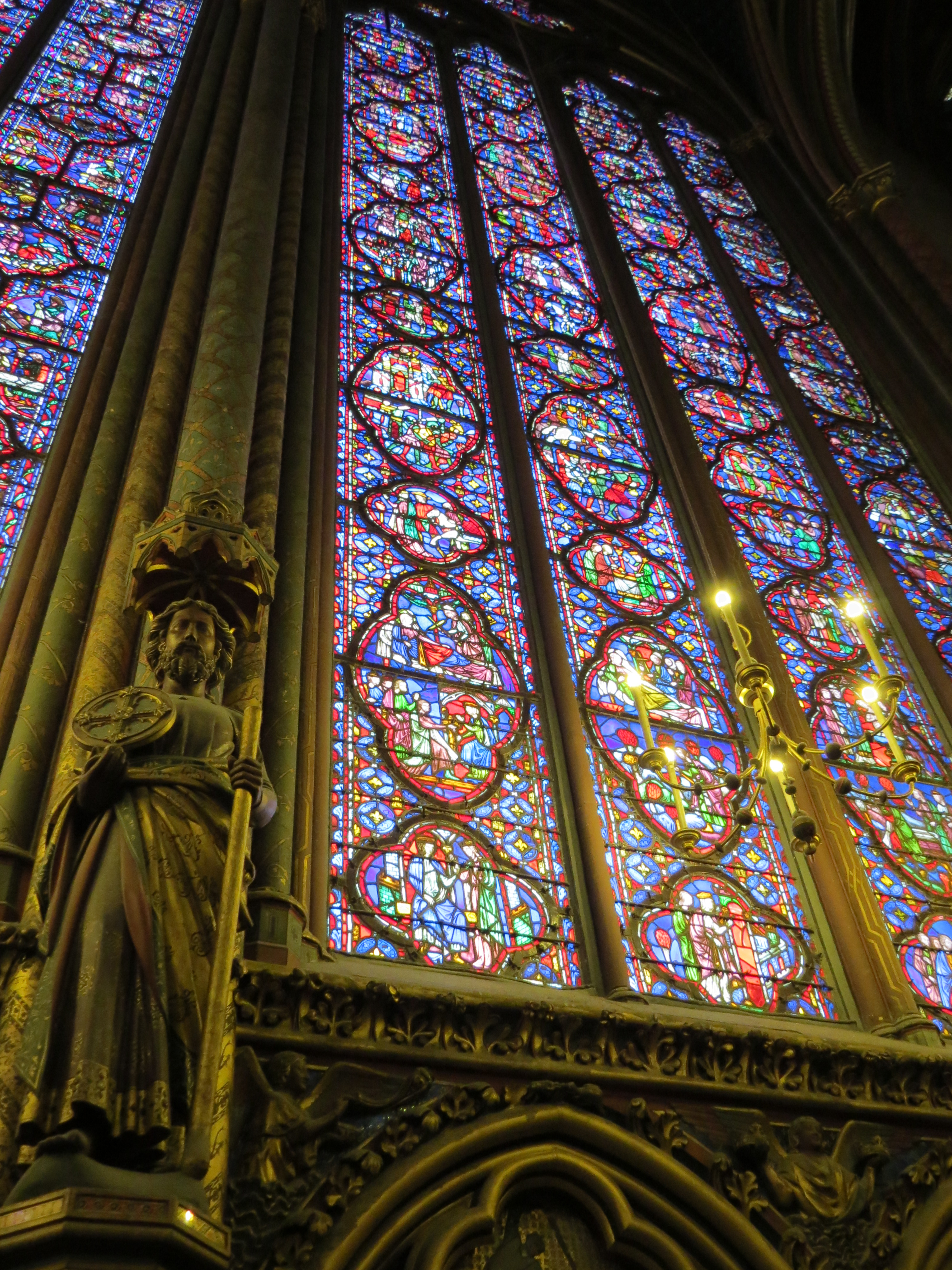 In past visits to Paris, I’ve never been able to see the legendary St. Chapelle, because it was being renovated, or the lines were too ridiculously long.  This trip, I finally was able to check off that item from my bucket list.

St. Chapelle was the home church of the early French king who was killed in battle during the Crusades and later became canonized as St. Louis.  The chapel itself is known primarily for its stunning stained glass windows, which are brilliantly colored, intricate and ornate, and reach to the very top of a high vaulted ceiling that seems to touch the heavens. The windows are generally viewed as the finest surviving example of stained glass artwork of the early Middle Ages.

The windows of the chapel each have a theme and depict Bible scenes that would be immediately familiar to the people of the time.  In addition to the windows, the chapel features fine wooden carvings of saints, small frescoes of Bible scenes, many of which are violent — how many people got beheaded, tortured or impaled during the early Christian period, anyway? — and a painting of Jesus engaging in the Last Judgment above the doorway.  I guess the idea was to remind you of the need to avoid the temptations of sin when you left the sacred sanctuary and returned once more to the real world.

As I craned my neck to take in the towering windows, I wondered about the medieval craftsmen who created the scenes at the very top, that cannot really be viewed and enjoyed by mortal man.  What must it have been like to work with dangerous substances like lead, doing the painstaking work needed to create delicate objects of such beauty, knowing that the product of your labors would be largely inaccessible to your fellow man?