There are some obvious, time-honored ways by which to distinguish American women from American men.

One group thinks The Three Stooges are hilarious; the other thinks they are appalling.

One group has a set of “functional boots” and another set of “fashion boots,” and the other can’t even grasp the concept. 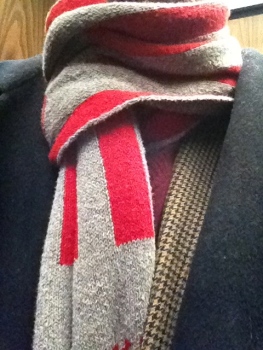 And one group can tie a scarf so that it looks poofy and kicky and fashionable, and the other is incapable of doing so.

I’ve learned this lesson this cold, miserable, unending winter, when wearing a scarf is a crucial tool in the Midwesterners’ arsenal of survival gear.  My scarf is a long, scarlet and gray piece that I got from the OSU Development Office.  I’ve tried winding it around my neck, bunching it up, and other scarf-tying efforts; now I just double up the scarf, loop it around my neck, and cinch it up to the chin.  It’s warm, solidly functional and keeps the wind off my neck, but it makes no fashion statement whatsoever.

As you walk around downtown Columbus on a cold winter morning — and today the weather app on my phone says it’s 1 degree outside — you see pinch-faced men walking hunched against the wind.  They all have a dull gray look to them.  The women, on the other hand, look colorful and bright in their gay scarves and snazzy boots.