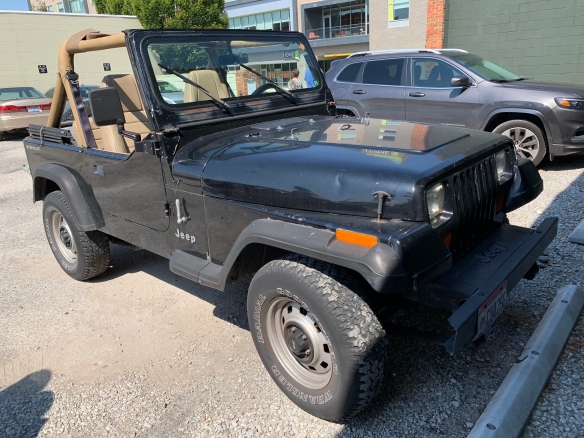 This morning I can scratch another item off my bucket list, because I can now say that I’ve ridden in a classic, open Jeep.

The B.A. Jersey Girl brought her family’s vintage, early ’90s Jeep to the office yesterday, and we used it to ride over to Indian Oven for lunch. Riding in a classic Jeep is an interesting and pretty cool experience. With the low-slung doors and the open back end, you’re much more exposed to the world than you are in a car — even in a convertible. I’ve never been as motivated to buckle my seatbelt and anchor myself as I was when I first climbed into the Jeep yesterday afternoon.

But once you get used to it, a Jeep is a fun ride on a warm, sunny day. While the B.A.J.G. deftly shifted and navigated through traffic, I had a bird’s eye view of the downtown Columbus lunch hour crowd — and vice versa. Everything seemed a lot more vivid and immediate without the tinted windows and car ceiling to separate interior from exterior. And people tend to give a Jeep more of a once-over than they do a normal car, because Jeeps look so different. I’m sure the passersby yesterday were surprised to see two lawyers, hair flapping in the breeze, where you might expect to see surfers or armed security forces instead.

Now that I’ve ridden in a Jeep, I suppose my next bucket list item has to be riding in a tank. I’d be willing to give it a try, but I’d be afraid I’d look as goofy and out of place as Michael Dukakis on his ill-fated photo op ride.  Then again, perhaps that already happened with yesterday’s Jeep adventure.

Senator John McCain died yesterday, at age 81, after a long battle with brain cancer.  He was an American hero for his fierce resistance to his North Vietnamese captors after he became a prisoner during the Vietnam War, and after he was released from captivity he forged a long and equally independent record in Congress.  He was a proponent of campaign finance reform, a steadfast supporter of veterans, and a strong advocate for the military.  McCain was one of those members of Congress who was willing to buck party leadership and reach across the aisle if he felt it was the right thing to do — a reputation that was confirmed when he voted against a repeal of Obamacare — and if I didn’t always agree with his positions, I always felt that he was largely motivated by a sincere belief in what would be best for the country. 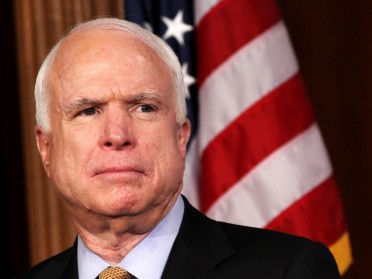 It’s an impressive legacy — but for many people, McCain will be remembered primarily as the man who was beaten by Barack Obama in the 2008 presidential election.

McCain’s death got me to thinking about the people who have run for President on a major party ticket in a general election and lost, and how many of them are still living.  Two of the oldest members of that group, Jimmy Carter and George H.W. Bush, actually won the presidency before losing their bids for re-election.  The other living members of the club of people who were unsuccessful in their run for the presidency include Mike Dukakis, Bob Dole, Al Gore, John Kerry, Mitt Romney, and Hillary Clinton.  All of them have had successful careers in politics and have made different contributions to the country — and all of them will be remembered, at least in part, for the time they lost.

America is a tough place for a politician.  The higher they rise, the higher the stakes, and when a person raises the money and makes the speeches and personal appearances and survives the primary system and becomes the nominee of a major political party, the stakes are the highest of all.  We routinely honor the winners — at least, most of them, if only for a short period of time — and second-guess and chastise the losers, dissecting their campaigns and pointing out every flaw and flub.

John McCain shows how unfair that perception is.  Sure, he never became POTUS, but that fact doesn’t detract from who he was or what he accomplished.  He was a lot more than an also-ran.

President Obama and Mitt Romney are busy preparing for their first debate, set for October 3 at the University of Denver.  With the first debate less than a week away, that means the rest of us need to prepare, too.

For all of their build-up, the debates usually are a yawner.  We’d like to see something shocking, spontaneous, hilarious, or intensely revealing, but it never happens.  Wouldn’t you love to see a candidate take a chance and do something to shake things up, like Mitt Romney coming onstage wearing a top hat and monocle in a humorous bid to deflate the “out-of-touch rich guy” mantra?  Of course, no candidate wants to take the risk that a bold effort or answer might backfire, so they play everything close to the vest.

As a result, for every memorable debate moment — like President Reagan, in response to a question about age, promising not to hold Walter Mondale’s “youth and inexperience” against him, Mike Dukakis’ robotic answer to a question about his wife getting raped, or Al Gore invading George Bush’s personal space — there are countless hours of tedious blather.  Adding “new” formats, like a “town hall” where “ordinary citizens” ask screwball questions, hasn’t changed the dullness quotient.  Does anyone remember anything about the Dole-Clinton debates in 1996, the Bush-Kerry debates in 2004, or the Obama-McCain debates in 2008?

What do viewers need to do to get themselves ready for the debates?  First, go to the grocery store and buy the biggest grain of salt you can find.  You’re going to need it for the silly pre-debate expectations management game and the post-debate spin and posturing.  Second, and speaking of the post-debate spin cycle, every viewer should do some preparatory eye muscle exercises, so they don’t harm themselves by uncontrolled eye-rolling in response to an outlandish claim that one candidate or the other committed the most awful gaffe in the history of politics.  Third, laying in heavy supplies of Five-Hour Energy, coffee, and Jolt Cola is a good idea, to help you make it through the droning “serious” question about education policy by a camera-hungry member of the panel of reporters and the equally droning answers of the candidates.

And during the first debate I predict every viewer will check their TV for mechanical failure at least once, because moderator Jim Lehrer’s sober visage will not have changed.  No need for that:  Lehrer, who pursuant to federal law has moderated every president debate since the Hoover administration, isn’t actually alive, but instead was manufactured decades ago when animatronics hadn’t progressed to the point of allowing nuanced facial expressions.

Time to get ready, America!