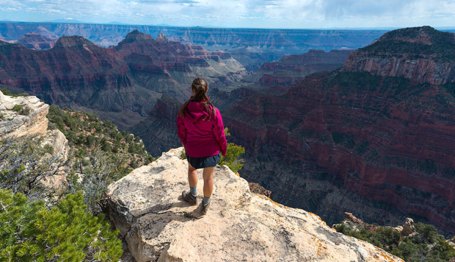 In an article on the death, Grand Canyon park staff are reported to encourage all visitors “to have a safe visit by staying on designated trails and walkways, always keeping a safe distance from the edge of the rim and staying behind railings and fences at overlooks.”  That’s good advice, but it’s not exactly easy to follow.  The Grand Canyon isn’t fenced in, and the lure of getting close to the edge of the rim, to take in the canyon in all of its dizzying, magnificent vastness, is hard to resist.

When we made our visit to the Grand Canyon some years ago with the boys, I remember inching my way closer and closer until I thought:  “Okay, that’s really close enough.”  I was probably a foot or two from the rim, like the person in the picture shown above, but it felt like I was on the edge of the precipice, and I didn’t feel the need to have my feet touching the edge so I could look directly downward.  I also tried to keep the kids from going right up to the edge.  If you do that, you leave yourself no margin for error, and any stumble or misstep could send you plummeting to your doom.  And, if your attention to where you are carefully placing your feet is distracted because you’re taking a picture with your phone — which apparently is what happened with at least one of the fatal incidents this year — the chances of a horrible mishap are just increased.

If you make a visit to the Grand Canyon, Devil’s Tower, or other cliffs, canyons, or rocky outcropping sites out west, you immediately notice that there aren’t many fences.  Fencing in the sites would not be feasible because of their sizes and configurations, and would ruin the views, besides.  The National Park Service trusts people to be mindful of their own safety and to avoid taking stupid risks — but of course, the sites were developed in the days before cell phone cameras and people mindlessly moving around, without looking where they are going, to try to get the perfect shot.

On Thursday, the National Park Service celebrated its 100th anniversary.

That’s a bit deceiving, because America’s first national park, Yellowstone, was actually created by a statute signed by President Ulysses S. Grant 144 years ago.  Initially, Yellowstone, and then other parks that were created, were under the control of the Secretary of the Interior.  The NPS was created in 1916 to provide for unified management.

Now, there are more than 400 national parks, and the NPS employs more than 20,000 people — but an additional 220,000 people volunteer in national parks.  That’s impressive, but not particularly surprising, because national parks are beautiful places.  And that employment number doesn’t count people who are employed by private companies that offer rafting trips, red bus tours, and other services related in some way to a national park.  In 2015, more than 307 million people visited one of our national parks.

America has has some good ideas in its history, but the concept of national parks — striking and special areas that are to be preserved and maintained for the American people — is one of the best of those ideas.  Anyone who visits a national park can’t help but feel a certain pride in our country, which not only has such beautiful areas but also has carefully cared for them.  And with people hiking, biking, rafting, camping, and otherwise enjoying the magnificent scenery and clean air, national parks tend to be enclaves of enthusiastic, active folks who care about their country and its environment.

I’ve had the good fortune to go to many national parks — including Yellowstone, Grand Teton, the Grand Canyon, and this year, Glacier National Park — but I’ve not visited Yosemite and many others . . . yet.  Hitting many more of our national parks is a bucket list item for me.  And whenever I got to a national park, I’m grateful for the NPS people who keep them patrolled and well maintained, because those parks are a true national treasure.

Some time ago I mentioned the fabled Washington, D.C. tale about laying off the elevator operator of the Washington Monument.  If funding was cut for the Department of Interior, the tale went, the elevator operator would top the layoff list — the reasoning being that inconvenienced tourists would apply pressure to restore the funding so they could ride in comfort to the top of the towering obelisk at the center of the National Mall.

With the recent partial government shutdown, the bureaucrats apparently went one step farther.  They closed the open memorials along the Washington, D.C. National Mall, including the vast World War II Memorial.  It’s not entirely clear why these open-air memorials would need to be closed; the stated reason was that the National Park Service was worried about the security of the memorials and the safety of visitors without the normal staff there.  So, some apparently essential employees had to erect physical barricades to keep people out who would otherwise be able to walk freely through the memorials, without the assistance of federal employees.

Then, groups of veterans appeared — World War II veterans, and Korean War veterans, and their families.  Elderly men in wheelchairs and using canes, they had traveled far to pay tribute and remember their service to their country, only to be denied entry by the barricades and signs.  After they were initially rebuffed, someone moved the barricades and the veterans poured through, to recall their service and lay the wreaths in honor of their fallen comrades, without any security or safety issues.

It was an embarrassing incident for our federal government, and it showed that the elevator operator theory only works when the federal funding reason for the inconvenience seems plausible.  When open air memorials are unnecessarily barricaded, and aged, stooped veterans wearing their medals and insignia are denied entry to war memorials that were built to honor their service, the elevator operator theory suddenly doesn’t seem like such a good idea, does it?