They’ve started a new campaign in German Village. The aspirational goal: to bring order and regularity in on-street parking.

Since we’ve been here, parking has been — to put it mildly — chaotic. Most houses don’t have driveways or garages, so street parking is a necessity. To complicate things, there are a few zones where stickers are required and non-stickered cars can get ticketed, but other areas are open for parking by anyone. The result is that people park where they can, which often means precious street parking space is wasted by yawning gaps between cars that nevertheless aren’t quite big enough to accommodate a car. When you’re hunting for a nearby parking space late at night, the not-quite-big-enough gaps and wasted spaces can be frustrating.

The new approach seeks to conserve and fully employ the precious street parking space. The city has painted corners like the one shown above to define specific parking spaces, and has also posted signs like the one below explaining the program and noting that people who flout the spaces can be cited with a $47 ticket. I can’t speak to whether people are reading the signs — I did, at least— but they do seem to be honoring the new spaces and parking between the lines. That will mean more parking spaces for us all.

Perhaps it shouldn’t be a surprise that painting indicated spots on streets would spur parking compliance and end the Wild West parking atmosphere. If the price of achieving more parking spaces is simply the cost of a few cans of white paint and the wages of whoever painted the corners, German Village residents can reasonably wonder why this simple solution wasn’t tried before. But let’s not be grudging, shall we? A delayed solution is still a solution, and the new program shows the city is paying attention to the unique needs of our community. That’s good to see.

Next week City of Columbus residents will go to the polls to vote on Issue 1.  Unlike other elections that are coming up in the next few months, I’ll go to the polls on Tuesday with anticipation, not trepidation, to vote against a colossally bad idea.

Issue 1 would change the structure of Columbus’ City Council.  Currently, the Council has seven members, all of whom are elected on an at-large basis by the city as a whole.  Issue 1 would create a 13-member Council, 10 of whom would represent designated wards within the city, with the remaining three being at-large members.  As the city grows, the number of wards could increase, and ultimately the Council could include as many as 25 members.

The proponents and opponents of the proposed changes have been debating the merits of Issue 1, and the Columbus Dispatch has come out against the issue.  In a nutshell, supporters of Issue 1 argue that the current council format produces members who aren’t paying attention to the needs of particular neighborhoods, and a ward system — where neighborhoods would be electing a specific member — would inevitably change that.  Opponents focus on the fact that the proposed ward boundaries haven’t been drawn yet, and the Dispatch argues that, while arguments could be made for restructuring the current approach to electing City Council because of concerns about corruption and cronyism, a ward system would balkanize the city.

I’m against Issue 1 for several reasons.  First, I think a ward system is likely to increase corruption, not reduce it.  That’s been the problem in many cities, where developers co-opt ward bosses to support pet projects in their wards in exchange for hefty campaign contributions.  Second, an increase in the size of City Council inevitably would increase administrative costs and add new people to the local government payroll — all to perform the very same function that has been performed capably by a much smaller group.

Finally, I think the existing Council system has worked pretty darned well.  Columbus has grown and prospered, and that’s due in part to the fact that City Council is focused on the city as a whole.  For decades now, Columbus city government has largely operated by consensus and without the fractious discord that has affected other cities.  I’m sure there are some neighborhoods that feel neglected in comparison to others, but the overall progress is undeniable.  Run a Google search on Columbus and you’ll find lots of articles talking about what a great city it has become.  Why change what has worked so well?

We’ve been spending much of our time during this Jacksonville visit just knocking around Richard’s Riverside neighborhood. It’s an older area just south of downtown, with some grand homes — such as this striking place along the river — as well as tidy apartment buildings, Victorian houses that have been converted to doctor and lawyer offices, nice parks, and a neat commercial area called Five Points — as well as the occasional orange tree.

It’s one of those neighborhoods that draws people because it’s got a lot to offer and is entirely walkable, bikeable, and joggable. It’s what a “mixed use” area aspires to be. Why don’t American cities have more neighborhoods like Riverside?

We were messing around in our yard on a summer Saturday when we saw it happen.  Schultzie, the McCormick’s ferocious black dachshund, had spotted a skunk and raced after it as fast as his stubby legs could carry him.

The skunk ran into a small drainpipe that ran under the road between our yard and the field beyond, and Schultzie followed without hesitation.  The skunk came out and waddled into the weeds of the field, never to be seen again.  Schultzie did not.  Keith called for him, but he didn’t come out.  We looked in one end of the drainpipe, then in the other, to see if Schultzie was close enough to grab.  He wasn’t.  We was back in the pipe, his stout weiner dog body firmly lodged back somewhere in the gloom.  We heard him, barking furiously.

We all went home to tell our parents.  Soon a crowd gathered.  The adults discussed and attempted various forms of rescue, but they all failed.  So, the adults did what adults did in the ’60s when something weird happened and there was no other apparent solution:  they called the fire department.

The fire department!  They’d never come to our neighborhood before!  That was exciting news, so the crowd clustered around one end of the drainpipe grew steadily.  The Dads decided it would be a good idea to bring over a cooler of cold beer, and maybe a bag of chips or two.  By the time the fire department got there an impromptu party had broken out, with the adults chatting happily and savoring their beers on a hot summer day and kids racing around for a better look at the fire crew and their equipment.  The trapped Schultzie, on the other hand, was largely forgotten.

The fire crew decided to try to flush Schultzie out using some kind of foam concoction.  As they prepared to do so and more beers were drained, the tension built.  The flushing went forward, the foam shot into the drainpipe . . . and soon Schultzie came jetting out the other side in a gout of foam and water, soaking wet and a bit scraped but otherwise none the worse for wear.  The mob of kids and Moms were happy that Schultzie had survived all the excitement.  The Dads, on the other hand, decided they may as well crack open another beer and discuss the fire department’s rescue technique, so they did.

It was a red-letter day on the Circle, and it was tough to sleep that night for all the excitement.  That day has always been vivid in my memory.  I thought then, and still think now:  this is what a neighborhood should be like.

Yesterday, I just couldn’t take it anymore.  Ouchy back and all, I got down on my hands and knees to weed the front yard. 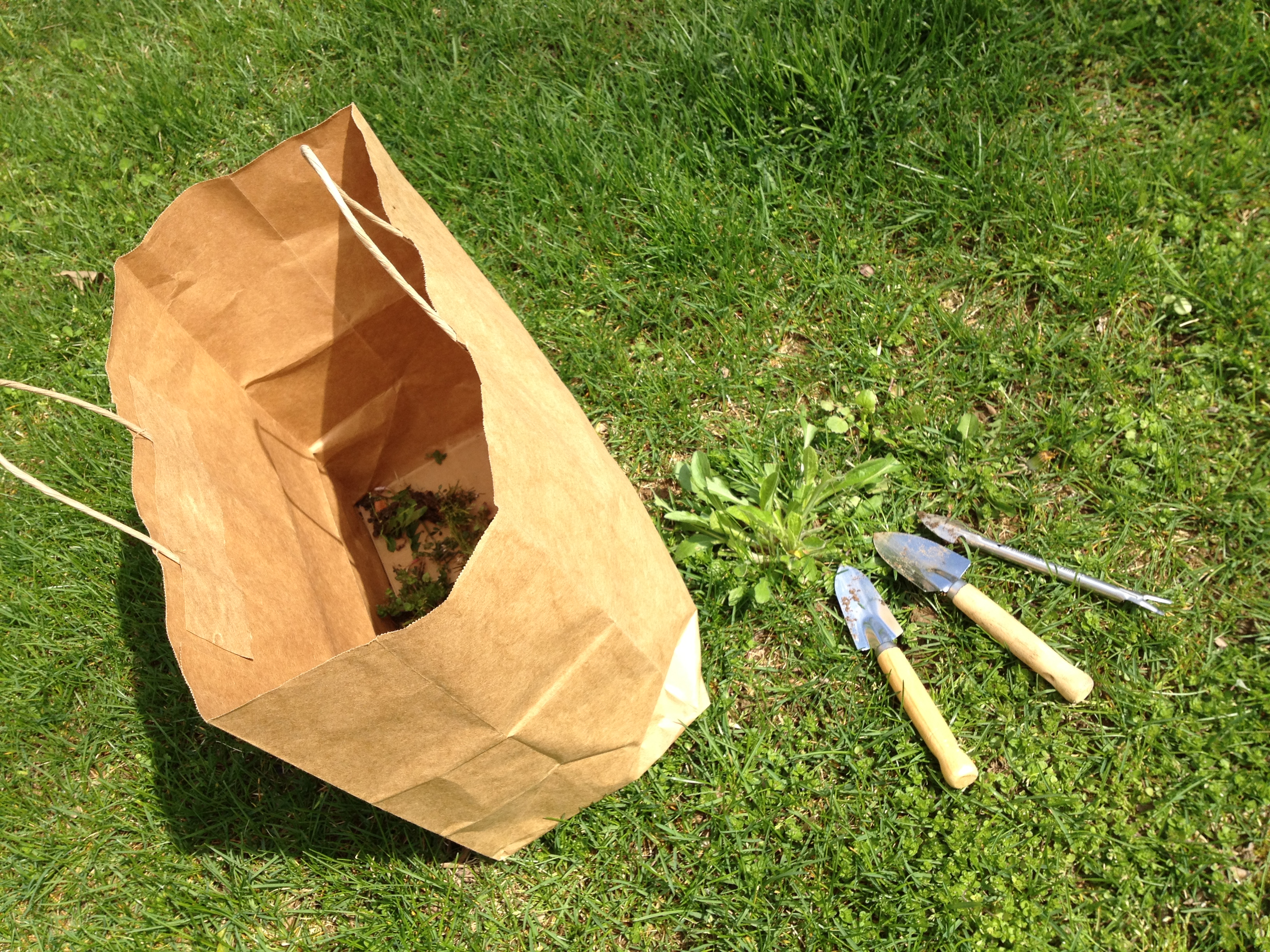 I don’t know if it was caused by our warmer than normal winter, or if our grass is just getting wearing out, or if our lawn care service changed the spraying schedule and deferred the weed killer application, but this spring we have been beset by a grotesque plague of weeds.  Dandelions, clover, and other ugly looking plants had sprung up everywhere, ruining the uniform, velvety green carpet all homeowners aspire to and making our yard look like a patchwork quilt of unsightliness.  It was offensive to look at, and I didn’t want the neighbors to think that we were letting our yard go to seed.

So I went out on weed patrol, with my paper bag and my weed control tools.  I know spraying is effective, but I think it’s best to get down close to the spot, get some dirt under your fingernails, and dig the weeds out roots and all.  I use some spoon-sized shovels to get under the weeds and work them out of the ground; dandelions, for example, come out with a satisfying pop.  And, because I’m using small shovel, the yard doesn’t end up looking like I’ve got a gopher problem.

I worked on the front and side yards for a few hours yesterday and left them looking moderately presentable.  Neighborhood pride is a powerful motivator.

We live in a cul de sac.  Cul de sacs tend to be popular neighborhoods for little kids — after all, there is no through traffic — and our street is no exception.

Several months ago two of our neighbors who have two very young kids added something new to our neighborhood at the entrance to our cul de sac. Bright green, sporting a red cap, an orange flag, and a “Slow!” sign, it appeared in the center of the road one night as I came home from work.  You have to slow down to maneuver around him,  which obviously is the idea.  Kish and I call him “Turtle Boy” because of his bright green coloring and slightly hump-backed appearance.

I don’t mind Turtle Boy.  I like seeing that parents care enough about their kids to invest in a sign designed to slow down traffic.  Obviously, individuals can’t be permitted to clog our streets with signs of their own devising, but there really is no risk of that in this case.  This is just an instance of parents with toddlers protecting their offspring.  I also like that the parents showed a kind of “can-do” attitude and took effective steps themselves.  In his own silent way, Turtle Boy is a kind of tribute to the American spirit.