The people of Stonington are concerned about the future of their community. They aren’t worried about an approaching nor’easter or the remnants of a tropical storm; they’ve survived many of those. Instead, they are worried about federal regulations, designed to protect the endangered North Atlantic right whale, that they are afraid might sink the Maine lobster industry–the industry that supports many of the businesses and households in Stonington, which is the largest working lobster fishing community in Maine.

On August 31, the National Oceanic and Atmospheric Administrative (NOAA) issued final regulations that will close a part of the coastal waters off Maine to lobster fishing from October to January, which is traditionally a lucrative time for those in the lobster trade. And then, by May, lobster fishermen will have to configure their lines and traps to meet other new regulations that are designed to limit the number of lines connecting buoys on the water’s surface to lobster traps on the ocean floor and to weaken the strength of the rope lines, so that any right whale that becomes entangled can break free.

That’s a source of significant disagreement between the Maine lobster industry, on one hand, and NOAA and environmentalists on the other. The Mainers say that lobster lines aren’t responsible for a shrinking whale population and that it’s been two decades since a right whale became entangled in a Maine lobster rope. NOAA says, on the other hand, that since 2017 34 right whales have died and 16 were injured by entanglements or ship strikes. NOAA also adds, however, that at least some of those whales were entangled in Canadian gear, and the Maine lobster advocates point out that the NOAA regulations of course won’t affect Canadian lobstermen while the Maine industry is being punished. The Mainers also grind their teeth when regulators say that they use survey data on “predictive density” of whales to close hundreds of square miles of waters to lobster fishing, when the lobster boat captains who are out on the water every day say the practical reality is that whales really aren’t affected.

And the lobster boat captains also note that the alternative fishing method allowed by the regulations–called “ropeless gear”–uses technology that is admittedly “not mature” and would be enormously expensive for individual lobstermen to implement. In all, the NOAA says that it expects the regulations will cost the lobster industry between $9.8 million and $20 million in the first year, and there is no federal money available to help them. That’s a lot of money for an industry where the front-line fishermen who bait and set the traps, deposit the buoys, and hope for a good catch, are primarily independent businessmen who own and man their own boats. That’s why Stonington’s assistant harbormaster, quoted in the first article linked above, says bleakly: “This will sink a lot of people.”

It’s a classic example of the push-and-pull between industry and environmentalism, except this time the “industry” being affected isn’t faceless corporations, but individual, blue-collar lobstermen, many of whom are from families that have engaged in lobster fishing, using the traditional rope-and-buoy approach, for generations. If the new regulations, which are expected to be challenged in court, stay in place, and those independent boat captains can’t afford to comply with the new requirements, it will take away a huge source of both jobs and year-round revenue that hundreds of families count on. It’s not hard to understand why the locals are concerned that the regulations will dramatically change the Stonington community.

The old saying is that “all politics is local.”  We’ve seen some very tangible evidence of the truth of that saying here in Stonington, Maine.

Last night there was a public hearing at the Stonington Town Hall about food trucks.  It’s a hot issue here for the small business owners.  There’s a limited “summer season” in Stonington when local businesses hope to sell their wares to tourists and visitors enjoying the sunny but not-too-hot weather, and also a limited amount of four-hour on-street parking in the “downtown” area that those tourists and visitors can use.  Business owners are concerned that food trucks can come and use those precious spots for the full four hours, potentially making parking a challenge and causing a visitor to pass their business by.  And the restaurants, all of which are locally owned businesses, aren’t happy with the idea of food trucks swooping in and taking away customers.

Stonington doesn’t have an ordinance governing food trucks.  Should there be one, and if so what should it say?  Last night the town’s Board of Selectmen heard from the public on the issues, and now they’ll decide.

And sometimes the politics is even more local — specifically, about one person with a piece of cardboard and a magic marker.  The sign below was posted on a telephone pole just at the eastern entrance to the downtown area.  Not knowing anything about the “whale rules” that the sign mentioned, I did a Google search and learned that the National Oceanic and Atmospheric Administration has promulgated a proposed rule to protect the endangered North Atlantic right whale.  NOAA believes that the whales are at risk of death or injury from entanglement in the many buoy lines that connect lobster traps on the ocean floor to their buoy markers on the surface,  The new proposed rule would require Maine lobstermen to remove half of their vertical buoy lines in the water — which means directly reducing the potential catch.  In a town like Stonington, where many people are self-employed in the lobster industry, that’s a federal rule that could potentially have an enormous and direct impact on the town.  Public hearings on the rule will begin soon, and Maine’s congressional delegation has appealed to President Trump to quash the proposed rule.  They argue that there really isn’t evidence that the lobster buoy lines are responsible for the decline in the right whale population.

That hand-lettered sign just outside of town got my attention, and made me look into an issue that i wasn’t aware of before.  It just shows the impact of a little local politicking. 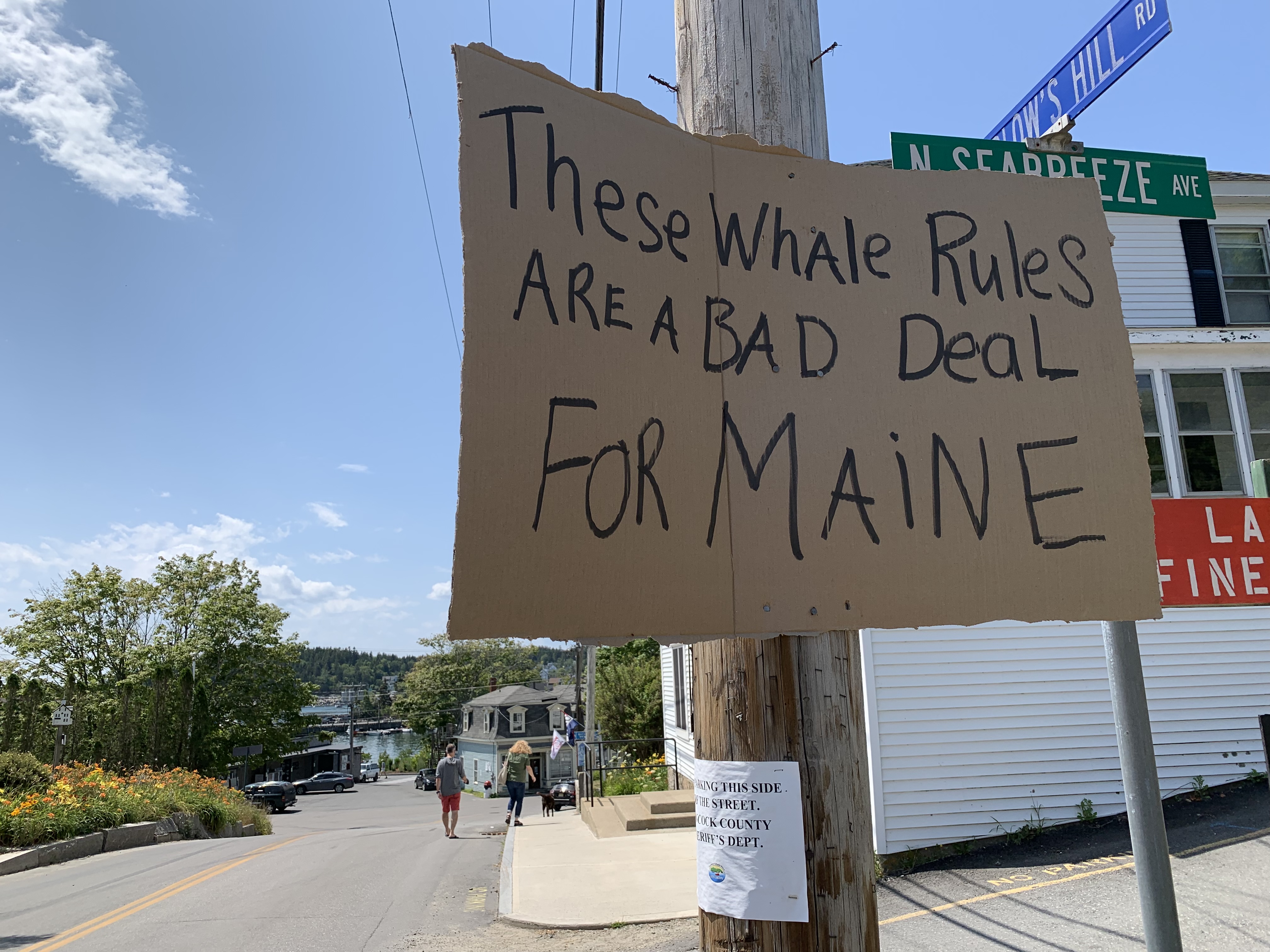