All too rarely, a TV sitcom character strikes just the right chords, and manages to capture something special.  Think of Norm on Cheers, or Kramer on Seinfeld.

In my view, we’re seeing that happening right now with the character of Bertram Gilfoyle on HBO’s Silicon Valley.

For those who don’t watch the show, Gilfoyle (who’s always called simply “Gilfoyle,” by the way) is a software engineer for Pied Piper, the high-tech start-up that’s always teetering between the promise of fabulous riches and impending, crushing failure.  He’s got to be one of the darkest, most cynical comedic characters ever written — which shouldn’t be surprising since he’s a satan-worshipper.  With his unshaven, shaggy dog appearance, his cut-rate glasses, his gravelly bass voice, and his utter lack of sensitivity to the conventional niceties of the modern world, Gilfoyle is always ready to convey a devastating, usually vulgar put-down or offer a crucial comment while coming up with a technological way to save the day.  Often, the target of his ripostes is his fellow engineer, rival, and foil, Dinesh — who’s also hysterical in his role as the hopeless geek who desperately tries to be cool and gladly follows all of the trends that Gilfoyle then punctures with deadly, deadpan zingers.

How can you not like a character who says things like “I’m not one to gush, but the possibilities of your consequence-free reality are darkly promising,” or “If my mother was naked and dead in the street, I would not cover her body with that jacket”?  Or engages in dialogue like this:

Dinesh: “Did you see that? She gave me her hat.”

Bertram Gilfoyle is a rare mixture of paranoia, unconventionality, casual disregard for the law, wariness, technological savvy, and general nuttiness.  Given what’s going on these days, he’s a pitch-perfect character in our modern world.

In a classic episode of Cheers, Norm — “Norm!” — talked about eating at the Hungry Heifer, a blue-collar dining hall where the portions were immense because all of the food was imitation.  Woody, intrigued, decided to join Norm for a meal.  When he returned to the bar he explained that the imitation food had to be called by a slightly different name, then raved about the “loobster” and “beff.” 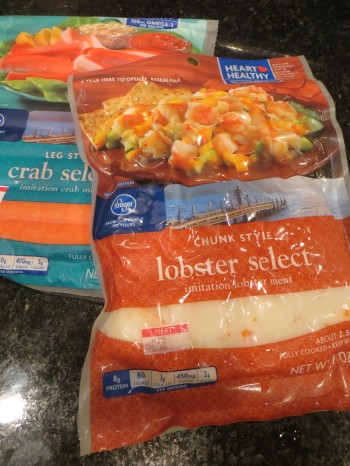 Lately I feel like I’ve been channeling my inner Norm.

When my doctor told me to try to eat more fish and less red meat I groaned.  I don’t mind the taste of fish, but it’s a pain to prepare and tends to stink up the house.  One day at the neighborhood Kroger, however, I noticed packages of chilled imitation crab and imitation lobster.  They were cheap, so I decided to give them a try.  Surprisingly, they were tasty, and now they’ve been worked into my evening meal rotation on days when we don’t feel like making a big sit-down meal.  I feel good about listening to my doc when I buy them, because they have a “heart healthy” logo, too.

What’s in the imitation crab and lobster?  Mostly Alaska pollock, apparently.  The ingredient list also indicates that the product includes water, wheat starch, sodium, extracts of crab, oyster, scallop, lobster, cutlassfish, anchovy, and bonito, fish oil, rice wine, egg whites, and corn starch, as well as some more exotic sounding experiments from the chemistry lab, like disodium inosinate, guanylate, titanium dioxide, carmine, and canthaxanthin.  For all of that, the imitation lobster and crab taste pretty much like lobster and crab.  And, on the laundry list you won’t find anything that looks or sounds like red meat.  So, on any random night you might find me munching on some imitation crab leg, feeling good about my dietary habits and food spend, and inevitably thinking:  “Norm!“