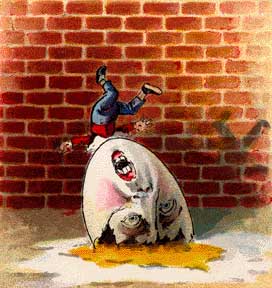 This piece explores the back story of the rhyme and potential explanations for its origin.  It concludes that the two proffered explanations of the rhyme that try to link Humpty Dumpty to historical events — like the death of Richard III — are implausible and decides that Humpty Dumpty was originally intended as a riddle to which the answer was an egg — which is why Humpty Dumpty is always shown as an egg in nursery rhyme books.  I’m not so sure about that, because the piece also notes that the phrase “humpty dumpty” first came into the English language as a reference to an alcoholic concoction and then later was used to describe a clumsy or a stumbling inebriated person.  Given the latter meaning, I think it’s more likely than not that the rhyme traces its origin to a drunk person who fell from a wall and was killed.

It’s not a pretty picture, but when you think about it most of the old nursery rhymes and fairy tales were pretty disturbing.  Ring around the Rosie is commonly thought to trace its origins to the Black Death, with “rosie” referring to the red swellings of the lymph nodes associated with the Bubonic Plague, posies being carried to avoid the smell of the afflicted, and “all fall down” reflecting the suddenness of death.  Rock a Bye Baby and its baby mysteriously perched on the treetop who falls to the ground isn’t very reassuring to children, either — and we haven’t even gotten to ugly tales of cannibalism, poisoning and terrifyingly smart wolves like Hansel and Gretel, Snow White, and Little Red Riding Hood.

We heard these stories as children and somehow managed to make it to adulthood without too much long-term psychic damage.  Kids are more resilient than we think.