Last night Kish and I hit the Ohio Theatre to see the traveling production of Beautiful, a show that tells the story of the life and music of Carole King that, in the process, sounds larger themes about American music and the ’60s.  It’s a terrific production that will be playing at the Ohio through June 11 — although given the packed house on a Wednesday night, I’m not sure any tickets are available if you don’t have them already.

King’s story is a rich one.  As a teenager with obvious musical talent, she decided she wanted to be a songwriter, which was not a standard career choice for girls growing up in the ’50s.  After selling her first song, she met her future husband, became a wife and mother while still a teenager, and with her husband wrote a series of hits, had an office in a songwriting shop on Broadway, and became friends, and friendly competitors, with another songwriting couple.  But while her career is soaring, her marriage became more troubled.  After it ended, she headed to California and wrote the songs that made Tapestry a landmark album.  The show ends with King back in New York, performing at Carnegie Hall the year Tapestry is released.

The story is told largely through songs — both those written by King and her husband and those written by others — with short bits of dialogue mixed in.  It’s fast-paced, funny, and poignant, all at the same time.  The staging is amazing, with sets silently sliding in and out and pop acts from the ’50s and ’60s cleverly recreated.  And, of course, the music is great.  Julia Knitel, who plays Carole King in this production, is a tremendous talent who plays the piano and has the singing and acting chops that are perfect for musical theater.

If you’re going to the show, get there early.  Last night the show drew a decidedly older and largely female crowd, and you’ll need plenty of time to steer through the forest of walkers, canes, and slow-moving seniors.  But we’ll give them all a break, because we know they all owned a treasured copy of Tapestry that they played over and over until their turntables broke, and when they heard the music again they were transported back to when they heard it the first time, nearly 50 years ago.  The intervening 50 years may have made the listeners older, but the music itself remains as fresh and vibrant as ever.

This weekend the CAPA summer movie series at the Ohio Theatre features Raiders of the Lost Ark.  I might wander over tomorrow afternoon to catch a showing of what I consider to be the best action adventure movie ever made, and watching it on the big screen will make it even better.  That’s if I can get a seat, of course — the last time the Ohio Theatre screened Raiders, more than 2,000 bought tickets to watch it.

I’m sure that some people will disagree with my assessment.  I guess it depends on how you define “action.”  Raiders isn’t filled with fight scenes, although it has some truly great ones, and if you’re looking for a huge body count, this film really won’t fill the bill —  but the people who do get killed tend to die in very novel and interesting ways, whether it’s getting pincushioned by poison darts or chopped to smithereens by the propeller of a plane or being melted by the Wrath of God.

But if you’re looking for action from beginning to end in exotic locations, with a very human hero and his two-fisted love interest mixing in a lot of laugh-out-loud humor along the way, Raiders is the movie for you.  The first scene alone, with Indiana Jones brilliantly avoiding countless traps, getting betrayed by his assistant, and barely avoiding getting crushed by a giant rolling stone in his quest to steal a gold icon, is worth the price of admission.

Then you follow it with appalling Nazi bad guys, Old Testament biblical stuff, and some of the greatest stunt work ever filmed.  We get to see Professor Indy in the classroom with his love-struck female students, then teaching the Washington bureaucrats what they should have learned in Sunday school, Marion’s drinking bout with Nepali goat herders, the monkey who gives the Seig Heil salute, an exhausted Indy’s decision to shoot down a sword-wielding giant, Marion’s encounter with the Nazi whose apparent torture instrument turns out to be a coat hanger, Indy and Sallah and Marion at the Well of the Souls . . . and you realize that there’s so much great stuff in this movie it blows away the competition.  And when the capstone shows the Ark of the Covenant being crated and stored in some unending government warehouse, you’ve simply got the greatest action movie, ever.  There’s really no argument. 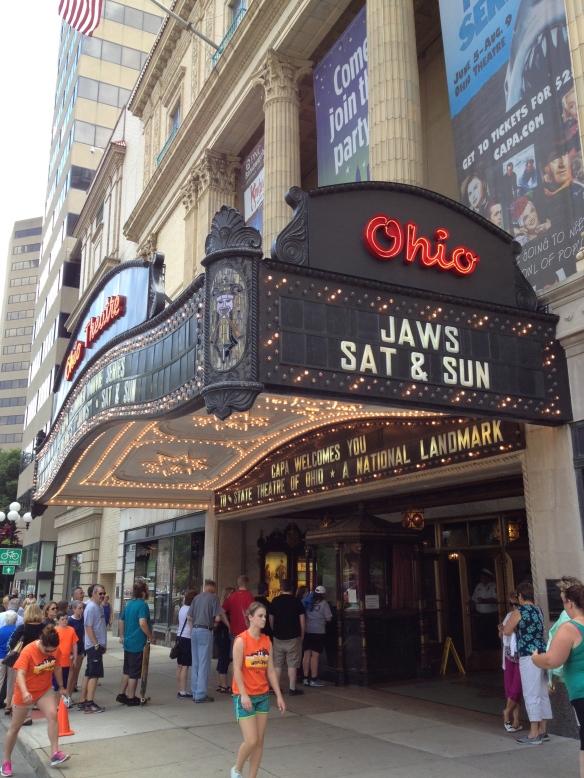 The CAPA summer movie series is one of the great treasures of Columbus.  For several months the mighty Ohio Theatre becomes a repertory cinema, playing the best Hollywood has produced for your enjoyment in plush, opulent, air-conditioned comfort — with a plus.

This afternoon Kish and I went to see Jaws, which is the summer movie to end all summer movies.  Until you see Jaws again, on the big screen, in all of its colossal splendor, you forget what a marvelous film it is.  So believable in its portrayal of small-town provincialism, so well-acted by Richard Dreyfuss, Roy Scheider, and Robert Shaw, and so compelling in its set pieces — from the little scene between Captain Brody and his son at the dinner table, to the destroyed kid’s raft that washes ashore after one of the Great White attacks, to the bloody, horrible, screeching end for Quint in the shark’s mighty, threshing mouth.

It was telling that, even forty years after its release, the film still brought a gasp and shriek to the audience when the face of the dead fisherman drops into view in the hole of his ruined vessel.  Jaws is being released for a limited engagement, nationwide, next week, and if you get a chance to see it in a full-sized theater you have got to go and hear that familiar shark music again.  It really is a masterpiece of American cinema.  (If you live in Columbus, you can go catch Jaws at the Ohio Theatre tonight, at a 7:30 performance.)

And speaking of masterpieces, no description of the CAPA summer movie series would be complete without a mention of the “plus” that I was talking about — the “Mighty Morton” theatre organ that rises from the stage floor to entertain the audience with classic organ music and then sinks back down, with the organist still playing and pumping away, as the curtains open and the film credits roll.  The organ  alone is worth the price of admission — which is only $4 a person in any case.

Last night Kish and I put our ’80s on and went to see Bryan Adams at the Ohio Theatre with a group of friends.  We had a great time watching Adams put on a terrific show.

The performance was part of Adams’ Bare Bones Tour, in which he performs with an acoustic guitar, a harmonica, and (sometimes) a piano player — and nothing else.  The goal, he explained, was to reduce his songs to their absolute essence, stripped down and spare.  It was interesting to hear his music reimagined in that way, and although the piano and acoustic guitar put out an impressive amount of sound, what the bare bones approach really accomplished was to allow Adams’ trademark gravelly voice to come to the fore.  And despite the passage of years Adams remains in astonishingly good voice, quite capable of the vocal leaps and flourishes that helped to make the original versions of his songs so special.

Among other selections, Adams played Run to You and Straight from the Heart, Cuts Like a Knife and Summer of ’69, Heaven and This Time, Have You Ever Really Loved a Woman? and I Still Miss You . . . a Little Bit.  Between songs he talked about his music, spoke to members of the audience who seemed very eager to interact with him, picked some fans to fill four seats down front, and invited people from the balcony to come down and dance in the aisles on the first floor.  By the end of the show the area around the stage was a mosh pit of thirty- and forty-somethings, swaying to the music and singing his songs at the top of their lungs.

Last night’s crowd was predominantly female and appeared to include many woman who became Bryan Adams fans as young girls and still love his music.  We were entertained by a group of four women sitting right in front of us who clearly were on a liquor-fueled ladies’ night out.  They sang Adams’ songs with lusty abandon, blurted out unexpected comments, and tried, unsuccessfully, to clap in rhythm to the beat.  They were channeling their inner teenagers and transported back in time by songs that they loved and still touched them deeply.  It was a living testimonial to the enduring power of music. 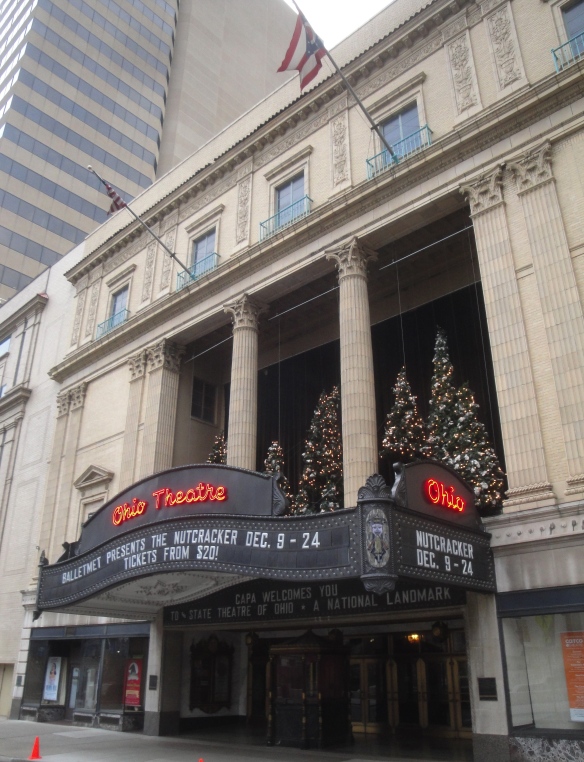 One of the longstanding holiday traditions in Columbus is BalletMet’s performance of The Nutcracker at the historic Ohio Theatre, in the heart of downtown Columbus.  Every year central Ohioans pack the theater to enjoy Tchaikovsky’s classic holiday music and the dance stylings of Columbus’ local ballet troupe.

And tonight, Christmas Eve, the children will nestle all snug in their beds, while visions of sugarplums dance in their heads.

Richard had the excellent idea that we should eat downtown tonight and then watch Strangers On A Train at the Ohio Theatre.  Cath, Brittany, Mom, Richard and I had dinner at Dirty Frank’s, a downtown eatery that specializes in inventive hot dog-based concoctions, and then traveled over to the theatre for some organ music and some Alred Hitchcock mastery.  The hot dogs at Dirty Frank’s were really quite good (I had a chili dog and a combination of frankfurter, brisket, and barbeque sauce that really hit the spot) but the real highlight of the evening was the movie at the Ohio Theatre.

Strangers was being screened as part of the Summer Movie Series, which runs from early June to mid-July.  It is a popular series, I think in part because it is just enjoyable to watch a movie on a big movie screen, in a huge, ornate theatre, with organ music played on the theatre’s “Mighty Morton” organ.  Strangers is a classic part of the Hitchcock library, with all of the interesting camera angles, mounting suspense, tension-breaking humor, and stunning set pieces — in this case, a struggle to the death on an out-of-control carousel — that you expect from vintage Hitchcock.  Watching the film on a big screen, in a large theatre where the laughter rolls around the room like water being swirled in a basin, just makes the movie so much better.

No Summer Movie Series outing would be complete without some accompaniment by the Mighty Morton.  The organ is a massive white object that rises from and then descends into the floor of the stage.  It also is an astonishing musical instrument of great complexity and range; at one point the organist played Chattanooga Choo-Choo and delivered a very credible approximation of a steam engine, complete with whistle.  Watching the organ being played properly, as the organist strikes pedals, tabs and keys, is like watching some kind of intricate Russian ballet.

Events like the CAPA Summer Movie Series contribute mightily to making Columbus an interesting and fun place to live.