The most recent addition to the Ohio Statehouse grounds — and the final stop on our periodic tour of public art outside the Statehouse — is the Ohio Veterans Plaza, located east of the Statehouse at the Third Street entrance.

The Ohio Veterans Plaza is framed by two curved limestone walls that face each other from the opposing ends of the Plaza.  Each wall is fronted by a fountain and a bed of red, white, and blue flowers.  Between the two walls stretch green rectangular lawns studded with flagpoles and embedded stones with the names of each of Ohio’s 88 counties.

The grounds are lovely, but it is the inscriptions on the facing limestone walls that pack the emotional punch.  The inscriptions are taken from letters from or about soldiers during wartime.  The letters range from the abrupt commanding officer’s notification of grief-stricken relatives of the death of a loved one on Iwo Jima, to heartfelt efforts to explain why wars are necessary, to expressions of love — son to parents, father to son, and husband to wife — written in the shadow of likely death, to more humorous descriptions of the life of a soldier.  It is impossible to read even a few of the letters and not be moved by the sacrifice of those who have fought on our behalf. 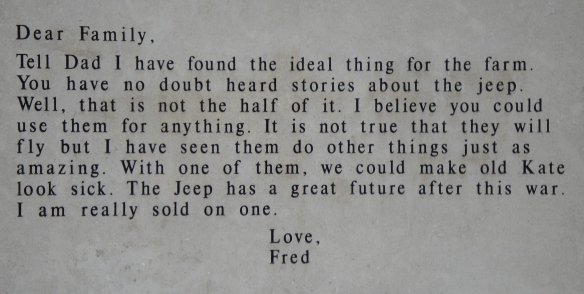 As poignant as most of the letters are, my favorite is the letter from Fred, a young man who wanted to let his family back on the farm know about the wonders of the Jeep and how it could make old Kate — no doubt the family plow horse — “look sick.”  It is somehow reassuring to know that, among all the death and devastation and trauma of World War II, one stalwart Ohio farm boy was focused on the future and how a rough and tumble vehicle could make his life in the fields a bit easier.