I’ve written before about pocket parks — those small, quiet enclaves of green trees and grass and shade carved out from cityscapes that can brighten the lives of the people in the surrounding neighborhood — so I’ve got to call out Boise, Idaho for a pretty cool example of the pocket park concept.

The C.W. Moore park is just a few blocks from the core downtown area of Boise.  It’s a beautiful little park, and it’s got some features you don’t see in most parks.  For one thing, it’s got a functioning water wheel in one corner — and what person taking a break from the hurly-burly of life wouldn’t enjoy watching a slowly moving, mesmerizing water wheel and hearing the sound of the rushing water?  The water wheel is an important touchstone for the city’s history, too, because Boise is located in an arid region and water wheels and water systems helped to make Boise green and habitable.

The park also includes other links to Boise history.  Around the park you will see the name stones and date stones of former Boise schools and buildings — you can see part of the Central School name stone in the photo above — as well as a former building entrance arch, a carriage stone, a locally quarried limestone block, columns and streetlights from Boise’s past, and a building turret.  It’s all a pretty cool way of linking the park to Boise’s past in a tangible and interesting way.  Kudos to the Boise Park Department for taking the pocket park concept to the next level.

In 1962, a plot of land that was going to be developed into an apartment building was acquired, instead, by the City of Columbus. Covering about half of a city block on Beck Street, the city named the spot Beck Square Park. To the locals who watched the parade of pooches in and out of the park — often without sufficient owner attention to their societal obligations as canine consorts — it was colloquially known as “Dogshit Park.”

Then the City of Columbus teamed up with the volunteers from the German Village Garten Club, and “Dogshit Park” was transformed. Renamed Frank Fetch Park in 1985, after a former president of the German Village Society who had promoted the creation of the park, it is now a beautiful garden and neighborhood gathering spot that is enjoyed by German Village residents — and their dogs, who are more respectful of the grounds than they apparently used to be.

“Pocket parks” like Frank Fetch Park may have a small footprint, but they can have a big impact on the nearby community. I wish the City of Columbus would resurrect its 1962 approach, buy one of the surface lots downtown, and convert it into a small park. The increasing number of people living downtown would surely appreciate a Frank Fetch Park in their midst. 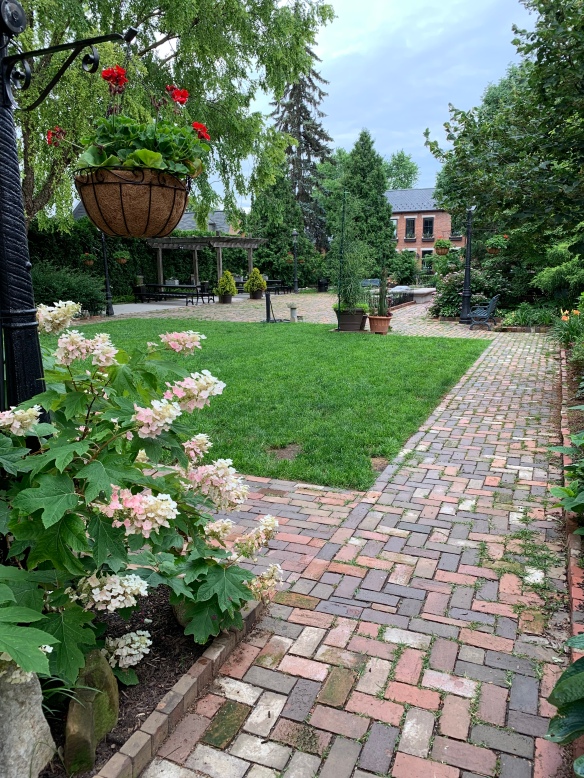 We took a walk around Goodale Park tonight. It’s a beautiful park with a lovely little pond in the northeast corner, and it was getting a lot of use tonight. I like the view over the pond, with the high rises of north downtown just visible over the treetops.

Parks add so much to a neighborhood!

The old ball game didn’t end well for the Indians, but Russell and I have enjoyed our trip to Boston nevertheless. After leaving Fenway Park we walked around Boston and visited the Boston Commons and the Public Garden, both of which were packed with people. Families, tourists, people leaving work, joggers, people reading on the grass on a sunny day with a delightful breeze — all were drawn to the green space.

It made me realize, again, what value there is to cities in having downtown parkland where people can gather. And a few fountains and monuments don’t hurt, either. 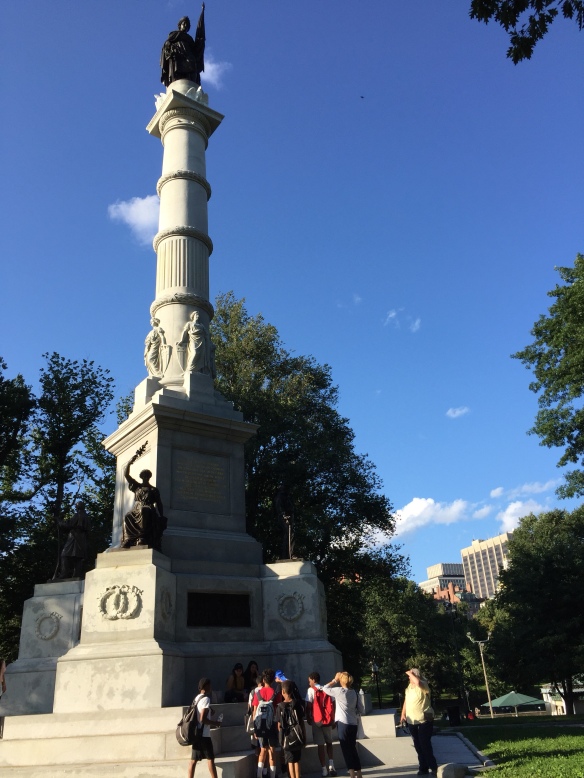 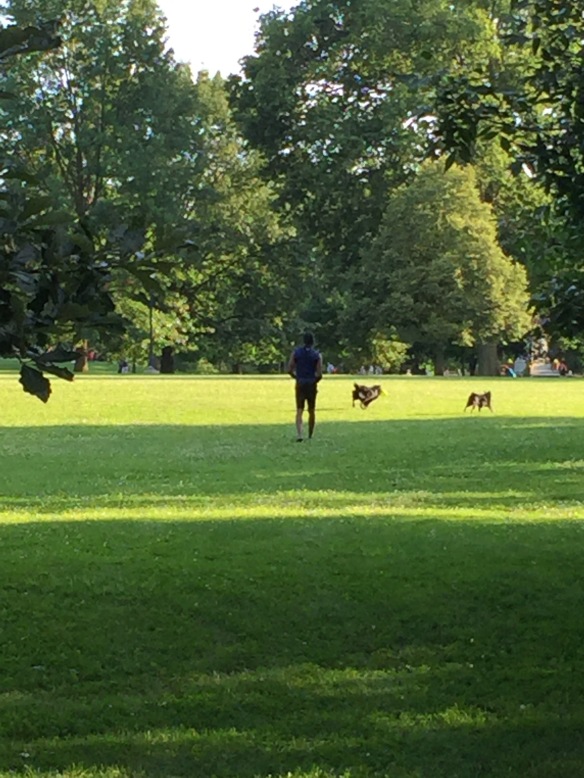 Living near Schiller Park — a sprawling, 150-year-old green space that covers multiple city blocks and is home to mature trees, picnic tables, lots of shade, a duck pond, a rec center, tennis courts, a playground, an outdoor basketball court, and a stage where the Actors Theatre of Columbus performs on summer evenings — has really shown me the value that a park brings to a community.

German Village has a very strong and distinctive neighborhood feel, and Schiller Park is a big part of that.  The park  is constantly in use, from the joggers and dog walkers who circle it in the early morning hours to the mid-day basketball and tennis players and parents pushing their kids ever higher on the swings, to the late afternoon birthday parties on the picnic tables beneath huge shade trees and people reading books on benches or playing fetch with their dogs.  You see the same people over and over, which of course reinforces the feeling of community, and you take pride in this beautiful patch of green that draws people like a magnet.  German Village without Schiller Park wouldn’t really be German Village at all.

In the American neighborhoods built before 1900, parks were of course part of the design — because green space and parkland were traditional in the countries of Europe from which many Americans of that era immigrated.  I’m sure the German immigrants who gave German Village its name never gave a second thought to putting in a large park, because it was just expected and obvious.

At some point after 1900, though, the builders of suburban communities saw parks as less necessary, whether it was because they figured people would be driving around and not interested in walking to a park, or because they concluded that the acreage of a park could be more profitably devoted to still more houses.  As a result, many suburban communities are seriously park-deprived.

It’s too bad, because a nice park really makes a difference and brings a lot of value to a neighborhood.

Established back in the early 1600s, the Commons remains a popular gathering spot for the people of Boston — and its tourists.  Along with the Boston Public Garden, located right next door, the Commons provides a merry-go-round, a frog pond, a towering memorial to the Bostonians who fought in the War Between the States — and some of the shady, grassy spots that city dwellers crave on a hot summer day.

At the west end of our block of Gay Street, next to the intersection with High Street, a kind of wooden module sits on the street adjacent to Cafe Brioso.  It’s pill shaped, and with its unfinished wood it looks like something you might find on a Fourth of July parade float or as the project of a high school wood shop class.  The outward-facing side of the object has a pink-paint-and-green-shrub “PARKT” sign — with the pink letters spelling “art” — and some plants along a ledge at the top.

It’s called a “parklet.”  The sign on the object explains that parklets are intended to “creatively and temporarily transform parking spaces into open public spaces,” where people can sit, relax, rest, and watch the street life go by — and sure enough, the parklet on our block features benches and stools.  The sign adds that parklets are “a new dynamic that will generate more interesting and engaging public spaces for Columbus, Ohio.”  The sign identifies corporate and community sponsors that presumably underwrote the cost of building and moving the parklet and occupying a parking space.

“Parklets” are an interesting idea that, if the results of my Google search are to be believed, started in San Francisco, where they are part of a “pavement to parks” initiative, and have been adopted by some other cities, including Columbus.  The parklet on our block looks as if it has been designed to be picked up, put on a flatbed truck, and moved to a new location where more public seating space is desired.

I’m all for increasing public seating space in our downtown, but I’d like to see Columbus take the next step and acquire some of the surface parking lots that are found downtown and turn them into pocket parks.  A parklet is a nice idea, but an actual park with green trees, shaded walkways and seating, and perhaps a fountain would be even better.

We’ve got some downtown green space — like the Statehouse lawn, Columbus Commons, the Scioto Mile, and the Topiary Gardens — but the section of downtown north of Broad Street is pretty much parkless.  (I don’t count Sensenbrenner Park, which is mostly concrete.)  With more people moving downtown to live, they will be looking for places to jog, work on their yoga poses, or just sit and read a book as the breeze ruffles through the trees above.  Even a small chunk of new green space, like the Ohio Police and Fire Memorial Park at the corner of Third and Town, would be welcome.