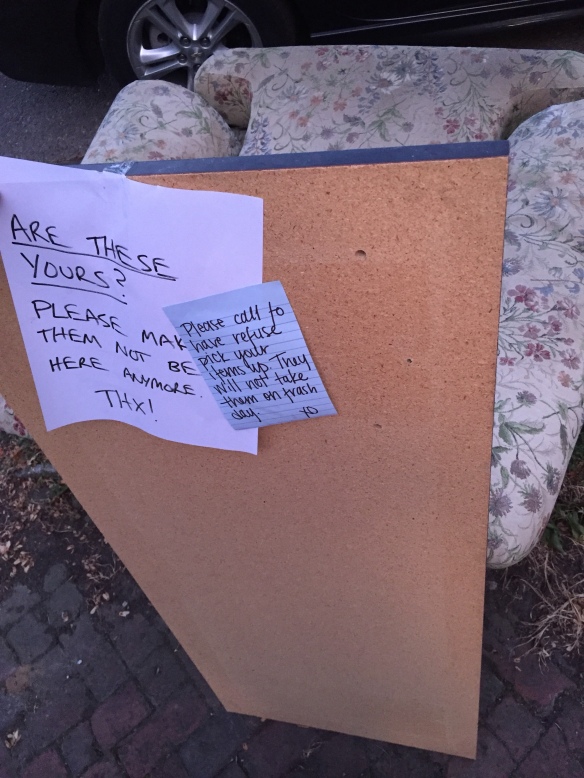 In our German Village neighborhood, most residents tend to be very protective of our streets and sidewalks.  We also recognize, however, that come trash day it’s not uncommon for scavengers to drive up and down the streets, looking for the possibility that one person’s trash could become another person’s treasure.  A large discarded item often is plucked before the garbage guys swing by.

But what if large items are so ugly or smelly that even scavengers won’t touch them — and they’re not within the guidelines defining appropriate refuse to be collected on the standard pick-up days?  What’s a resident who cares about appearances to do then?

After this unappealing, overstuffed floral print chair and mirror appeared on the sidewalk and then stayed there, like a pimple on the smooth brick skin of Third Street, one resident decided to go down the passive-aggressive note route.  First one hand-lettered note — the one asking to “please make them not be here anymore” — appeared.  Then, when the floral monstrosity remained for a day or two more, the second one popped up . . . just in case the offender needed to know the proper method for disposing of the overstuffed horror.  And does the handwriting indicate it’s one note-leaver, or two?  The use of lower case in the newer note makes me wonder.

When I take my walk this morning, I’ll be eager to see whether the unsightly chair and mirror are still there — and, if so, whether a new, perhaps more pointed, note has sprouted on the rear of the mirror.  We’ve seen the passive-aggressive “please” and “thx,” and the even more ironic “XO” hugs and kisses.  What’s next?  A passive-aggressive smiley face?

I was in the court clerk’s office the other day and got a chuckle out of this sign on the counter.  Sure, it’s got an obvious passive-aggressive element to it, but if the alternative is dealing with inconsiderate jerks who are having loud cell phone conversations while you are trying to assist them, why not take affirmative action?  It’s interesting, too, that it isn’t a handmade job — which suggests that there are so many people talking on cell phones at counters that there is a market for signs asking them to refrain from doing so.

I laughed at this sign, but I’m fed up with the cellification of our culture and people yakking on their handheld devices everywhere — even public restrooms.  Aside from the library, there really are no quiet zones anywhere anymore.  We now put up with people having noisy conversations in restaurants, on sidewalks, in parks, on public transportation, in airport waiting areas, and on those little buses that take you from the parking zones to the terminal.  Even worse, the cellophiles and blue-toothers make no effort to step away from the rest of the world and find their own little nook where they can continue their gabfest.  No, they think the rest of us just have to put up with their boorish intrusion into our world.

What is it that would make someone take a cell call, or make a cell call, while they are waiting to file or retrieve something at a court clerk’s office — or for that matter in all of the other places that have been invaded by cell phone conversations?  Is it self-importance?  It is trying to give tangible evidence that they are so important or so popular that they have to be on the phone at all times?  Is it that their boredom tipping point is so low that a few quiet moments while walking down the street or riding the bus are unendurable?

I never thought I would say that I enjoy commercial air travel, but at least plane flights involve that quiet period between the cabin doors closing for takeoff and the plane pulling up to the jetway after landing.  Oh, guess what — the FCC is considering new regulations that would allow the airlines to permit cell calls once a plane passes 10,000 feet.  Another quiet zone might be falling by the wayside.  Will the library be next?

German Village seems to be a very dog-friendly place.  Most of the people you see walking around have a dog, and I’d guess that dogs outnumber cats by about 10 to 1, if not more.

But then there’s that unfortunate but inevitable biological byproduct that dogs tend to leave behind. And if you don’t own a dog, and you’ve got a nice little flower bed between the sidewalk and the street that you’d like to cultivate, and the dog owners walking by aren’t living up to their end of the dog owner’s social compact with the rest of humanity, you might just get fed up about the whole issue.

And when that happens, a passive-aggressive sign is bound to be the result.  I particularly liked this one, with its neat penciled lettering on lined school notebook paper and all-weather plastic sheathing.  Proper punctuation and grammar, too, as well as kid-sensitive use of an acceptable alternative to more vulgar terminology.  It obviously wasn’t written in the heat of fury, but rather as a matter of deep resignation and indignation, after one too many discoveries of an unpleasant surprise.  The heartfelt “it’s disgusting” at the end is a particularly nice touch.

And it worked, too.  We always pick up after Kasey, but once I saw that sign I decided that discretion dictated steering Kasey away from even snuffling contact with that particular patch of ground to more neutral territory.

What do you do if you are a parent who is frustrated because your child simply won’t eat what you carefully pack in their school lunchbox?  One Dad decided to leave his youngster a note to encourage food consumption that read: “Every time you don’t eat your sandwich a unicorn dies. #Dadfact Love, Dad” 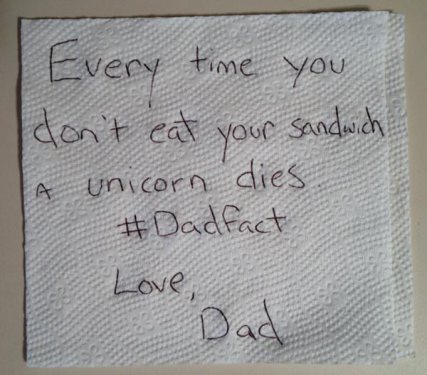 The idea that sandwich noshing might affect the health of mythical horned creatures is a tantalizing one, but what really attracted my attention was the notion that there are “Dadfacts” out there, ready to be disclosed to the waiting world.  This particular note-writing Dad has put his finger on something important.  “Dadfacts,” of course, would be unlike the unconditional reassurances and warming hugs that you receive from Mom.  No, “Dadfacts” would target the things that drive Dads crazy and make a daft, last-ditch, passive-aggressive bid to alter offspring behavior through statements that would make Moms recoil in horror.

I’ve got my list of “Dadfacts,” and I suspect other Dads do, too:

“Toys that get broken because they weren’t put away send out a “naughty” beacon that only Santa and his elves can hear.  #Dadfact”

“All of the adults who now live on the streets began their downward spiral by making their Dads pay late fees for rented videos and games.  #Dadfact”

“Plastic soft drink bottles that lose their fizz because someone failed to screw the top back on can never be successfully recycled.  #Dadfact”

“The amount of acne in teenagers is directly proportional to the number of times they return the family car with an empty gas tank.  #Dadfact”

“If you try to quit a sports team that you voluntarily joined during the middle of the season you’ll never actually see a dolphin or a whale.  #Dadfact”

“Spiders are attracted to the rooms of kids who say ‘I hate my clothes.’  #Dadfact”