Beards seem to be a source of endless fascination for medical researchers and health care reporters.  Ever since Peter Griffin grew a beard that served as home to a nest of birds on Family Guy, their prevailing view seems to be that male facial hair must be host to countless forms of microbial life and teeming with potential disease-causing agents. 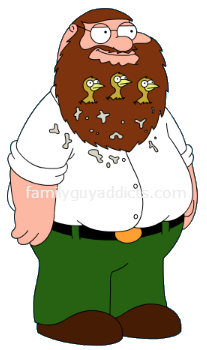 Some stories contend that the coarser nature of beard hair makes it more likely to trap food particles, note that stroking beards can cause a transfer of germs, and offer helpful observations like “If someone [is] eating dairy products it can get stuck in their beard and become a bit rancid.”  In another recent incident, a microbiologist took swabbings from beards, pronounced himself appalled by the results, and provoked stories with leads like this one on the USA Today website:  “Beard hygiene is important unless you want to have the equivalent of a dirty toilet seat growing out of your face, according to a microbiologist who swabbed a bunch of beards and was shocked by the results.”

Makes you want to cringe any time you’re in the vicinity of some stranger with a rancid sour milk-scented hairy toilet seat on this face, doesn’t it?

So, speaking as a guy who’s had a beard for the last 20 years, it was refreshing to see a new bit of research that counters the notion that beards are germ-ridden potential public health disasters waiting to spread plague and illness throughout the population.  A study published in the Journal of Hospital Infection found that clean-shaven men are more than three times more likely to have a challenging form of infection-causing bacteria called MRSA (for methicillin-resistant staph aureus) on their cheeks than bearded guys, and also are more likely to have faces with staphylococcus aureus, which can cause skin and respiratory infections and food poisoning.

Why would this be true?  Researchers think that those two forms of bacteria might form colonies and breed in the microabrasions caused by men repeatedly scraping their faces with sharp objects (otherwise known as shaving).  And, even more intriguing, a separate analysis indicates that beards may be home to microbes that actually kill bacteria, which could lead to the development of new forms to antibiotics — which something that the world desperately needs because bacteria are becoming increasingly resistant to the current array of antibiotics.

That’s right:  in the space of a single article, beards go from filthy petri dishes of lurking disease to the potential salvations of the human race!  I think I’ll celebrate by guzzling some dairy products and letting a few drops find a whiskery home.